Now it's time to reveal Bantayan Island's Dark Secrets.
What has happened to the island after a strong typhoon had hit it before.
Since you are here, I am assuming you had read my first part of this blog. If you didn't, then just click this: Bantayan Island Part 1 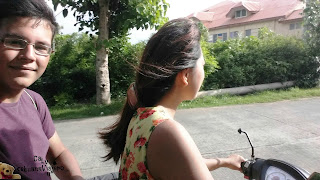 So, after leaving the our room keys to the reception desk, we head out and asked a local regarding a rental motorcycle.
The local guy then said that he will talk to the person and will bring the motorcycle instead.
Also, he had asked if we were planning to use a Scooter, or a geared engine. And since I want it to be safe, I chose scooter.
After a few minutes, he came back with a scooter, Kawasaki brand with no left side mirror due to some damage in the past (I assumed). We had paid him three hundred fifty pesos (Php 350.00) when we got the scooter. He taught us how to turn the engine on, how to open the seat for the baggage area, and he also said that we should be responsible since if there will be a damage caused by us, we'll have to pay for it.

We had no idea if it was full tank, or if the fuel gauge was working. So, I drove and we went out to a road made of land. I already had the map in my head, but because it was too secluded and there were so many corners, we didn't know which one to take. Good thing the locals were really kind to explain where to go. But since we kept turning to the right, we ended up going back to the resort.
So, we decided to take the route where we were driven by the tricycle earlier and looked for a gas station.

Honestly, I don't have a driver's license, so as Calvin. I have never driven a scooter, just a bicycle, so as him. But it was not a problem there since it was province like. Not so many cars running on the street, not so many people cross the road, and not so many traffic officers checking if you got a license. I know the traffic rules, so I just had to follow them as if I had a license.
So, when we got to the gas station, we filled the tank full but we had it filled for less than a liter since it was already full when the guy gave it to us. So, it is best to ask the person about the fuel details.

We then went straight to the northern part of Bantayan following the main road.
The road at Sta. Fe was still good, as well as Bantayan part. But when we were at Madridejos, the road was heavily damaged. It was hard to drive fast, but it was okay, we still arrived at our destination safely. 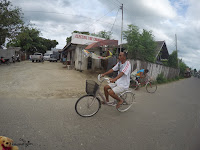 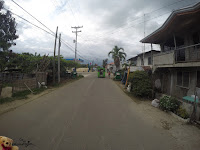 Basically, Calvin just told me to follow the main road until the end, and I was so surprised to see the sea! I did not expect that it was our destination. It also started raining hard, so we stopped over a small local convenience store (sarisari store) and drank a soft drink as we wait for the rain to stop.

Put the scooter under the shade of the store as well. There were so many kids and some old ladies were curious especially because my friend is a foreigner and it is really obvious. The kids were looking and playing around the scooter, and had to warn them to be careful from the heat of the exhaust. While the local ladies and old ladies asked us, and when noticed that I am a Cebuano, she started asking me in Bisaya while she tried her hardest in speaking in English as everyone laughed at her questions.
The questions were simple, name, age, place where we came from.
When I asked them where Lawis is located, they pointed that it was at the sea. While the ruins entrance is a few meters away from the store.

After a few minutes, the rain stopped. It was time to bade goodbye to new found friends/acquaintances, and to continue our journey. We might stop for a bit, but always remember to keep your eyes to your goals or destination, so that you won't lose your way or get stuck at where you are standing.

We went to the ruins entrance, parked the scooter in the sandy surface, locked and started our way to the bay walk.

There was a group practicing dancing hiphop by the shore with loud music on. It was around 3pm, but it looked like the sun was already ready to set. The sea was low, but not that shallow for us to walk to the lighthouse. 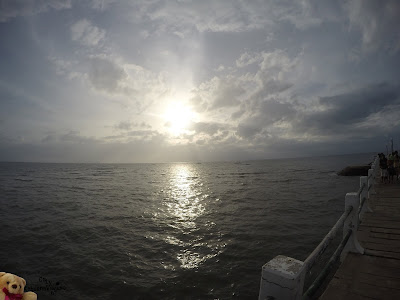 We had enjoyed our walk  in the bay walk, we even spotted a full 180 degree rainbow, since there is always a rainbow after the rain. 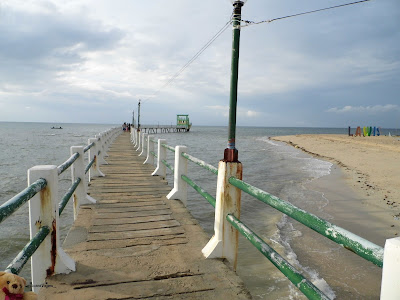 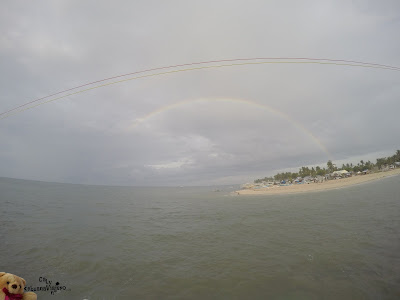 Took photos of how beautiful the beach was, even if it was a bit cloudy. 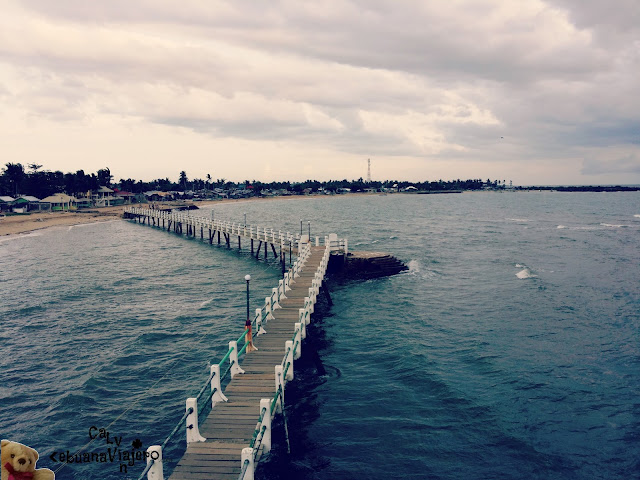 I'm scared of heights, but when there are some safety gears, I won't. But when I saw the ruin rail, it made my knees go weak.
Then, we went to the ruins, and enjoyed looking at the historical stage looking place. 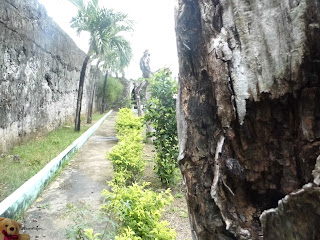 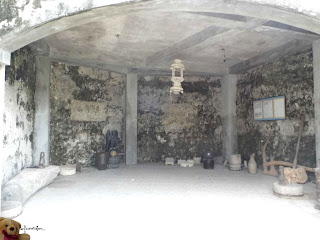 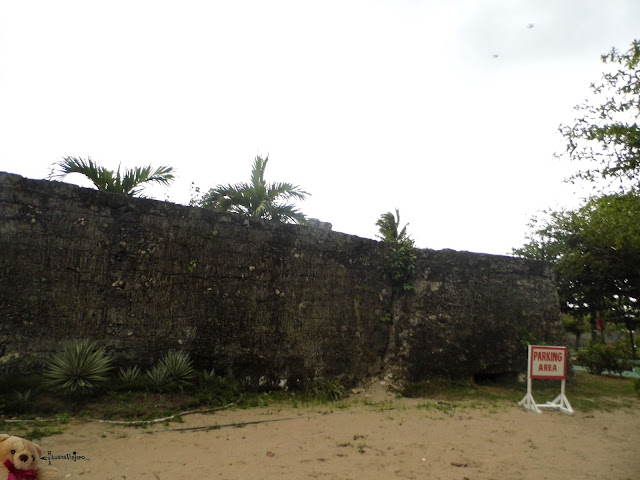 Right after, we had decided to leave after almost an hour of staying since we wanted to be in the resort before it gets too dark. We had to log our names in the logbook of a security guard in the area to keep track of how many visitors dwell. Their comfort room was really spacious and clean too. I guess it would be nice to take a dip if the weather was better and the sea was higher.

After a few minutes on the road, the rain started again. I hesitated to stop again or continue, but when I noticed that the cloud was just at Madridejos, I drove non stop until we reached Bantayan where it was dry. Calmly, we spent our time talking about horror stories on our way back and it started getting dark already. It was creepy and scary already, the wind was blowing coldly to our bodies, the trees were swaying strangely, but still we kept talking about real life horror stories.

When we reached Bantayan, we stopped over to get some barbecue on the street, since we were getting hungry as well. Calvin also wanted to try eating barbecue while riding, but he couldn't take a photo since it was so dark. 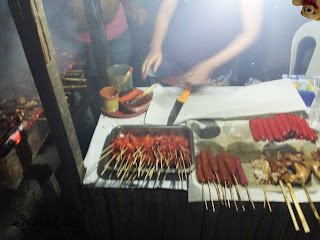 Nothing could be seen, unless a ghost pops out all of a sudden in the camera. Be mindful as well, that the road in the Bantayan square is one way. We had to round the square and stopped at the one of the oldest churches in the country, St. Peter and Paul Church. 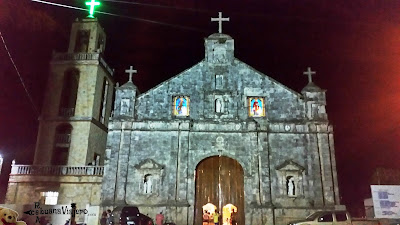 Then, we head towards the resort. It was really dark at 7PM, and there were no lamp post to guide us except the lights from the scooter and the car behind us. When we reached to the resort, we just went in, and ordered another clubhouse to be eaten by the shore as we looked at the blinking lights of Cebu from the island.

While walking, we saw some hermit shells, that shows up at night taking up empty shells as their home and walk to the sea. 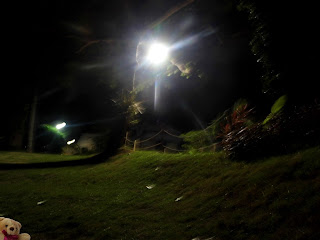 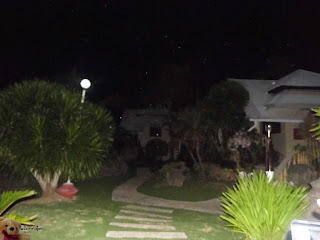 When we were back to the room, I was sitting by the balcony while Calvin was preparing himself to rest. When he went out, he accidentally locked the door and left the room keys inside. He had to go to the reception to borrow another set of keys. Because we were quite tired from the day's event, we dropped our bodies to the bed and slept so soundly. Put an alarm at 4AM to see stars at dawn for the next day.
We wanted to see the stars together, do you think we will be able to see it?
Are you wondering what we will be doing for our last stay in the resort and in the island?
Thanks for reading this far!
I will have the day 2 next week or more. So please, patiently wait. Thank you!

The Queens of Pop: In The Mix
This Is What You Should Do If You’re …
How to Build an EV Charging Station F…
GALA DALI – THE MUSE OF THE SURREALIS…
Understand You