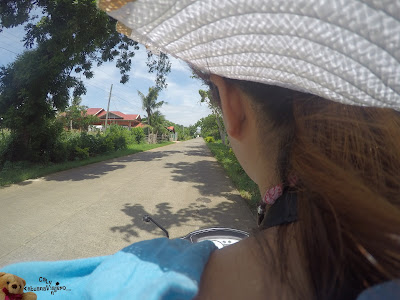 It's the second day for the Trip.
We had planned to wake up at 4AM to look at the stars, but we were so tired from yesterday's whole
day activity and lack of sleep. And the air conditioning in the room makes it feel so nice to just stay in the blanket and roll until the sun would wake us up.
I woke up at the alarm, tried to wake Calvin up, but he didn't budge. I don't want to see the stars by myself, since I had been seeing it for half or more than my existing life. So, I just went back to bed, covered myself with the blanket and doze off quickly.
We woke up around 7AM already, and had to prepare our bags, to pack again since we were leaving in the afternoon. Check out time was at 11AM and we still had plans to visit another location.
Swimming time again and this time, I was not afraid to dive 10 feet away from the floor. The pool's deepest part was 9ft.
And oh, here's a parrot that can't say any word at all, and doesn't even whistle (haha). I tried playing with them, but they produced a really weird and loud sound that echoed throughout the area. 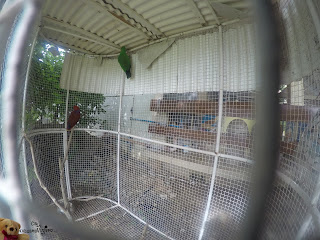 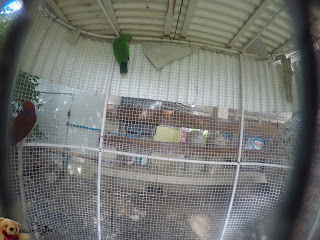 So I had to leave and went to the lounge to order.
We had taken our order for breakfast and instructed the staffs to put it in a bench nearby the pool, where we also put our things. We started swimming and diving while people started swarming. Oh right! It was a Sunday, making the Resort really busy.

After a few minutes of swimming, our food has Arrived. Breakfast time, and we did not take a photo since we were hungry. Calvin just got a Filipino breakfast where there was rice, a sunny side up egg, and chorizo (he liked the Filipino chorizo). While I got an American breakfast of bacon, slices of bread, and a sunny side up egg. We both had orange juice.

After eating, we went to the Ogtong Cave and enjoyed swimming a bit. Since it was rocky and there were a lot of people taking photos, it was cramped. So we just enjoyed swimming a bit, it was also dark so we couldn't see the floor and was afraid of getting our feet hurt from the rough rocks beneath.

We took a shower and got ready for our another joyride. We had taken our bags and other things from the room and left it to the reception area including our keys. We had also told them that we wanted to be picked up by their service to the port at 3PM. 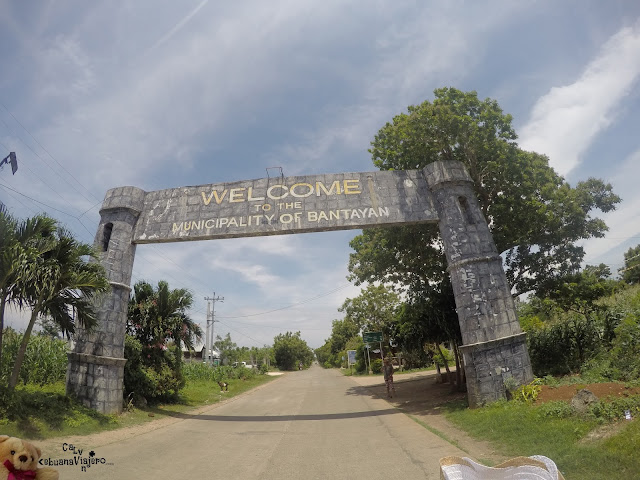 Using the scooter, we left the resort and went to the Bantayan square and bought some junk foods and some liters of water and liter of juice. I finally was able to take a daylight photo of the plaza and the St. Peter & Paul's church. 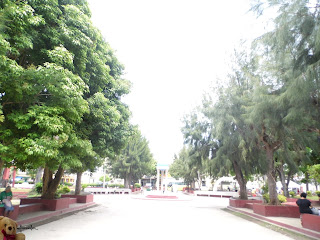 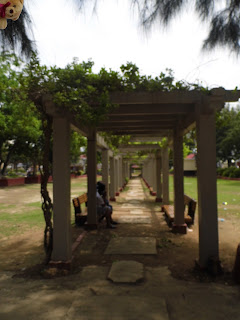 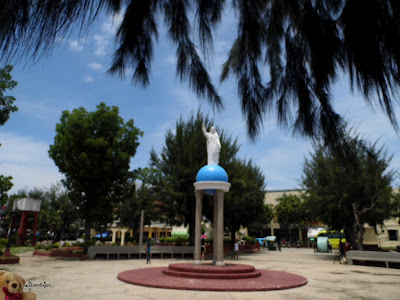 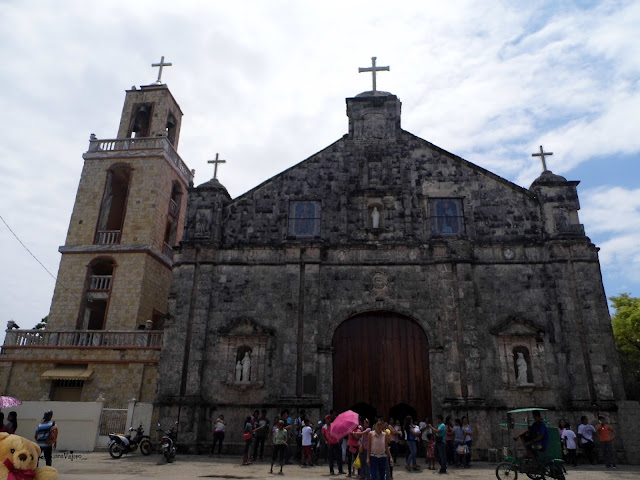 And since it took quite a while for us to get prepared, we stopped by a barbecue store in the street, we got hungry again. It was so sunny and it was partially made us exhausted for the day.
Calvin's mission for his vacation was: To ride a motorcycle and eat barbecue. 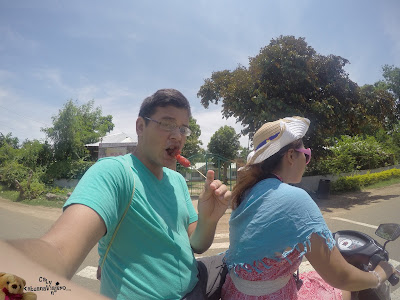 We then started our ride to go to Bantayan Nature Park. It wasn't an easy ride. The road was totally broken, asphalt then land then asphalt and such. It was hard to take a video since we have to hold on properly and avoid the cracks.
It was a long ride, and we even got lost because we went straight ahead instead of turning to the right right side. There was no proper signage and we had to ask the locals for the correct location.
And fortunately, they were kind enough to explain that we had to go back for like 5km.
It was really difficult, from the proper asphalt road, we have to take another rocky road towards our destination.
The place was indeed gorgeous, we had to pay two hundred fifty pesos (Php 250.00) as entrance fee which includes free use of their amenities like swimming pool, caves, and beach.
They also have a bar and resto, and of course a mini zoo.
They have horses, variety of birds and chicken, and plants.

The place really looks like it was part of nature itself. Their cottages were nice. It is one of the places we would like to stay if we could visit Bantayan Island, again. 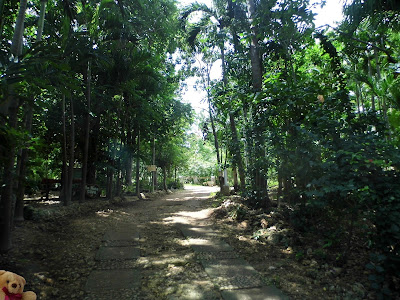 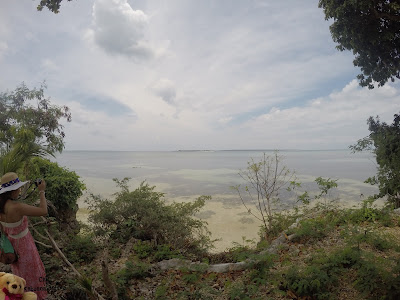 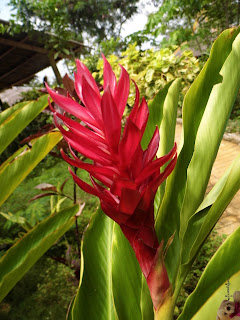 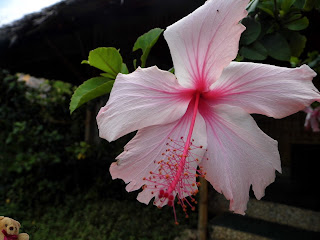 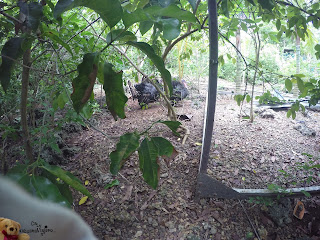 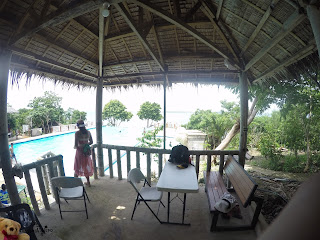 I wanted to swim in the infinity pool, but sad to say, I did not bring my swim wear.
We had stayed and walked around for almost an hour. We had to go back to reach the resort before 3PM. We bought some snacks again from the same store earlier; the snacks are for our trip back to Cebu, it will be a very long trip. When we went out, I found Alberto's pizza. I was surprised to see it there. I thought it only has branches in Cebu city, Mandaue City and other major cities surrounding the Visayas region. We went there, where we could see the lake and the river. It has fresh air too.
We had order two nine inches (9") pizza, and some drinks to cool us down from the heat. We had cookies & cream shake and mango shake. 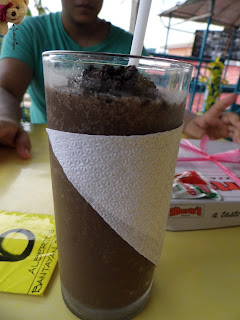 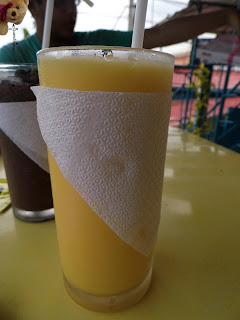 We started our journey back to the resort, and forwarded the scooter and the keys to another guy who is a friend of the one we borrowed it to. We were so thankful, so we gave a tip of fifty pesos which I and Calvin were thinking whether that friend guy would give it or not. We arrived quarter to three, and we were able to relax and buy a couple souvenir shirt, and some shirts for my parents. 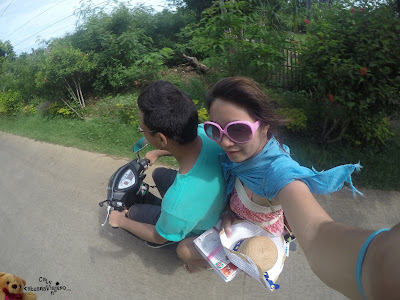 The service had arrived 30minutes later, good thing we were still able to make it for the 4PM trip. It was the last trip of the day, and we had arrived in Hagnaya port at 5:30 or so. It took ninety (90) minutes. 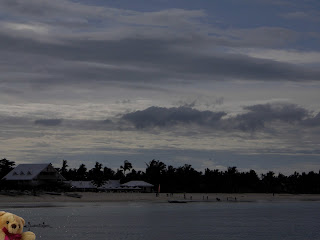 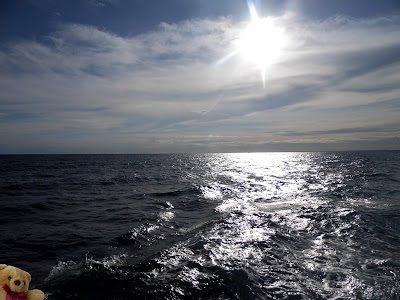 A guy had approached the passengers whether we would like to take a taxi, tricycle, motorcycle, bus, or a van. We took a van, where the guy reserved seats for us, and of course there is a tip.
We had arrived at my place at around nine in the evening, and we were so hungry from the trip since we had eaten all the snacks including the pizza while waiting for the ferry to leave Sta. Fe.

Our day was just full of riding and eating, but it was not easy. It was fun, tiring, and thrilling.
People were kind enough to explain to us about directions.
Overall, it was an exciting experience. It was also my first time to stay in a resort room and enjoy their amenities and it was fantastic!
I would not hesitate in telling you to visit the place. I really like to recommend it for everyone who likes serenity, peace, friendly people who gives out a smile all the time, and nature amenities.
Bantayan was severely damaged by the previous typhoon, but people were so positive in living life, and welcoming visitors warmly.
Thank you and I hope you enjoyed reading!
I am looking forward you will visit my blog again!

Sunday transfer talk: Manchester Unit…
Have you ever made love in front of o…
Get Sparkling Clean Patio Furniture i…
Witnessing an Aggressive Event
Private And Luxury Chauffeur Melbourn…


This post first appeared on 7 TIPS EVERY BUDGET TRAVELER WOULD SURELY APPRECIATE, please read the originial post: here
People also like
Sunday transfer talk: Manchester United star says his name has been wrongly spelt for his entire soccer career whereas Conte says his gall bladder operation was successful .
Have you ever made love in front of other people?
Get Sparkling Clean Patio Furniture in No Time with a Pressure Washer
Witnessing an Aggressive Event
Private And Luxury Chauffeur Melbourne Service For Your Convenience.
Best places to stay in Venice
Best 10 Food Delivery Apps to Satisfy Your Hunger
GALA DALI – THE MUSE OF THE SURREALISTS
Fiction Series So Big, They Cross Multimedia Platforms: The Witcher Series by Karen Wiesner
10 Best Restaurants in St. Augustine