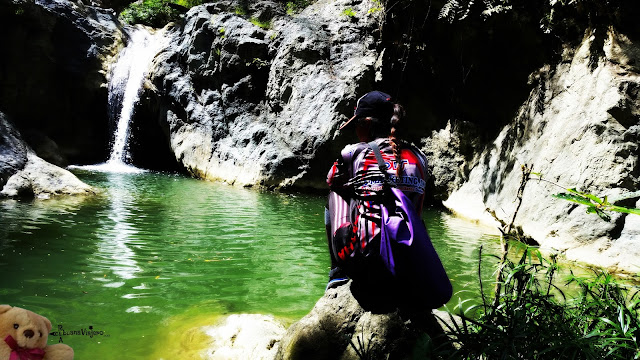 A colleague invited me to start hiking at Sirao Peak.
I have no official record as to climbing mountains. However, I have climbed the hill from my home to my school from elementary to high school which took around 5 minutes per way.
Also, I have hiked up the mountain at Oslob, maybe not to the top, but to visit a family every year which takes around 30 minutes or more per way depending on the speed of the walk.
Basically, I just used slippers or sneakers or whatever would be available for me.
I have no idea what Sirao trail looks like and how hard it would be or how high it is. I searched through the internet and found out that it has a few awesome falls in the area.
I was and still am amazed of the fact that a couple of waterfalls in the middle of the city.

Apparently, Sirao has been making noise in the internet and in the media because of it's popular Sirao flower farm which could be described as Little Netherlands in Philippines.
It has been visited by thousands of people already. It has been a few months since it was popular and No, I have not been there yet, and yes, I want to go there. Thinking that Sirao peak is near the Sirao flower farm. They have the same prefix words right?

My colleague had said that beginners can start their training via the Budlaan to Sirao trail. So I was confident it would be okay. The trek would be four (4) hours, yes that's very long, but she had told me that it is fine since there will be lots of rest. It was an average time for beginners, like me!

Anyway, as always, lots of people planned and wanted to go but only a few of us were determined to continue the plan and create the journey of the group.

Met up at Jollibee right inside the Grand Mall Talamban area and had lunch across the building where lechon manok were served. Yes, lechon manok or roasted chicken for energy.

After lunch, we head to the corner near Sunny Hills Subdivision to ride a motorcycle to the jump off point. When we arrived at the jump off point, we took a bladder break at a house who offers the use of toilet and charges depend on the person who is going to use it.

When everyone else was ready and had paid, we left and started our trekking down to the falls and the river. It was a steep walk when we were a few meters away from the falls, a group of people just came back from swimming as well, making the steep trail wet and muddy. It was the most difficult part, because we had to hold at some plants somewhere and for some, squat and walk slowly to reach the lowest part. 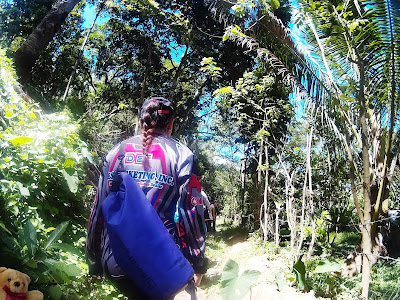 We took photos when we reached the waterfall. The water was green and some parts of it were stagnant. I cannot even fathom how deep the water would be and I did not dare to as the waterfall seems enchanting and not that welcoming for new visitors. However, it was a good spot to take photos with. There were huge live rocks with soft surface where we could stand and pose for a while. 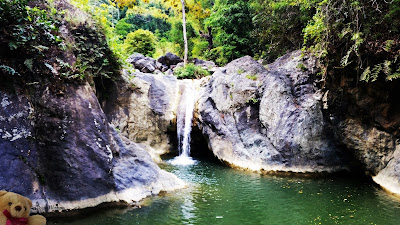 We met a group and asked them to take a photo of us and we lost track of them since they took a dip and rest for a while in the waterfall. 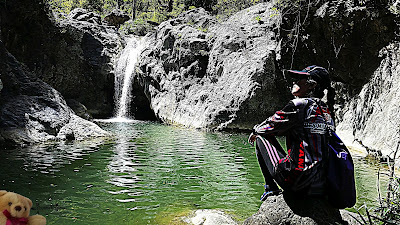 Bouldering was the challenging part of the trek, due to huge rocks and deep cavities in between the rocks from the top to the bottom. The trek felt like a hike in the green meadows where we sometimes see animals like cows eating or keeping themselves on the shade away from the heat of the sun.

We took a lot of rests once in a while also to get used to our activity. It was our first time to climb the mountain and we had enough time to climb the peak. We were getting near the top and we could only feel the exhaustion of walking for hours, not the climbing kind cause it was not that much of an assault yet. 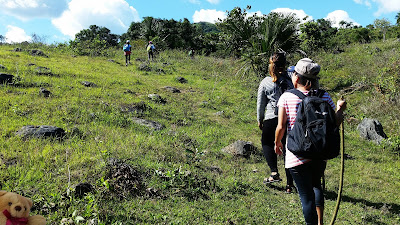 We took photos as we took our rests in one point where we could see the city and Mactan Island. It was windy and the sun's heat could not touch us due to the cold breeze.
We had continued walking and we were getting really tired, but guess what we found a Filipino convenience store we call sarisari store. Bought some refreshments while the others bought some chips or something to eat. 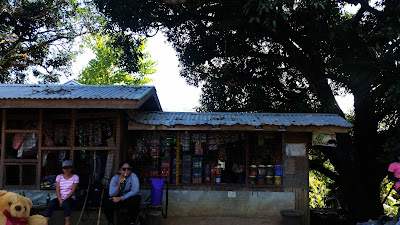 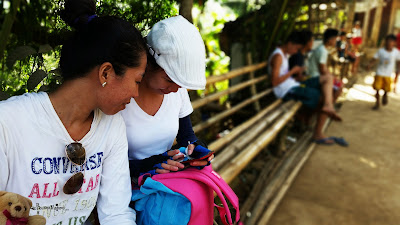 A few more kilometers and we would be able to reach the top. The peak could be seen so clearly and we were almost there. A few more minutes of walk, we had taken another rest and took photos from a big rock. When we noticed that the group we met earlier was down below, we immediately took our leave but then our leader forgot which way it was thus we had to ask the group and they politely helped us. 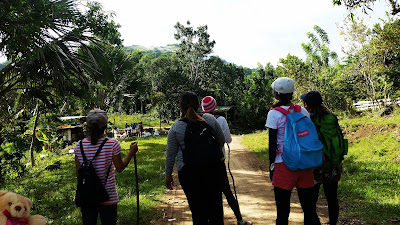 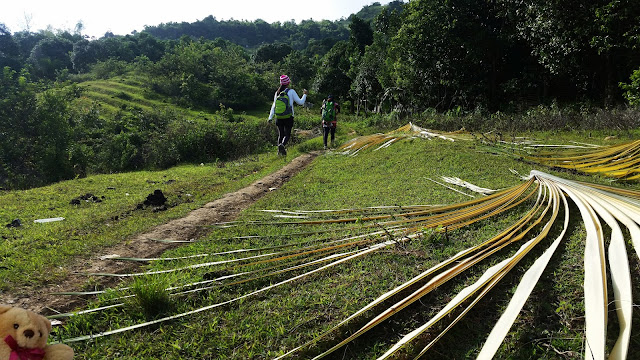 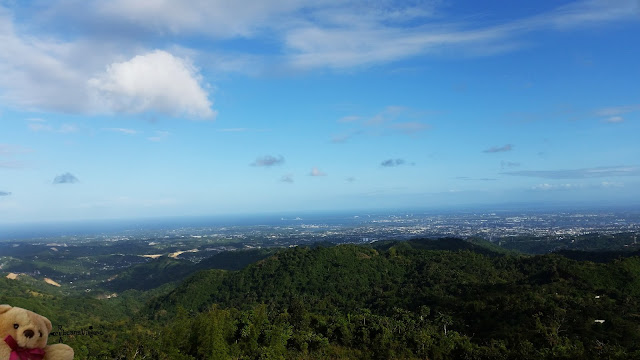 We had walked towards the peak but we were lost again! We had to walk back and asked for guidance from the group earlier. The men were really a gentleman, they waited for us and one of them even volunteered to be the sweeper.

Another challenging part was the last where we could walk for five (5) minutes, the assault to the peak surrounded with cogon grass or blady grass with a height of at least three (3) feet.

We had arrived on time before the sun had set, I was totally surprised at the amount of people in the area. I did not know there were a lot of people who climbed, but it was the other way around. 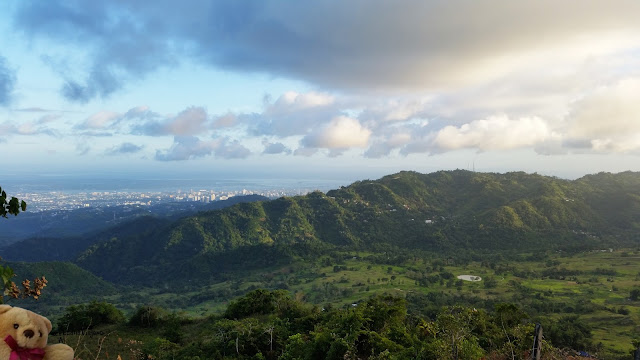 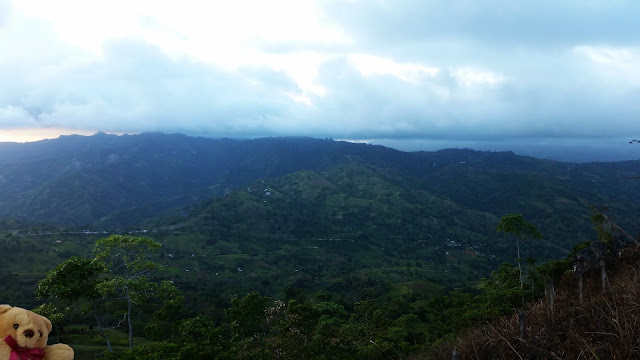 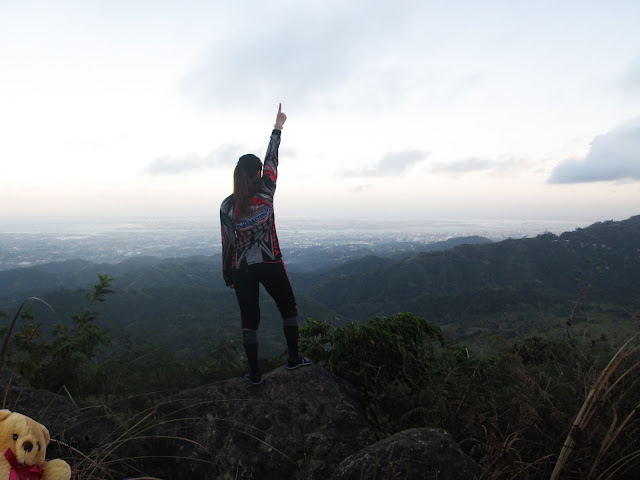 I took some sunset shots and other photos and we left the area before it got too dark, we had to walk under huge trees and it is safer to walk while there was still a bit of light.

When we went down the peak to the road, we saw three (3) habal-habal drivers and motorcycles waiting for "us" they said. Apparently it was true, because the group we met earlier had called for them and told them to wait for us. The group had decided to walk back to the city instead.

It was such a nice and overwhelming experience for me, to be able to reach the top and see what nature had kept for me to seek. That in every struggle, there will always be something beautiful to behold. That the journey may be as exciting as the destination itself. Of course, it all depends upon the person executing the activity.
With an open mind and open heart, everything will take place where it should be. 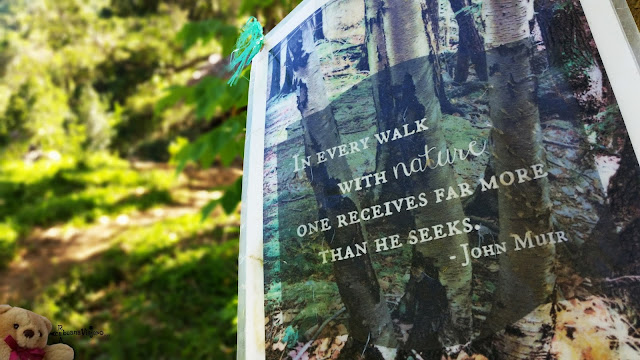 For more photos, you can visit our Facebook page!