Renewables will Keep Growing Whether Oil Prices are Low or High 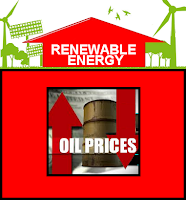 Regardless of whether oil prices are low or high we will continue to see massive increases in renewable energy which will ultimately help to make fossil fuels obsolete. Although low oil prices have historically hurt the growth of renewables, this appears to have changed. World Watch cites statistical analysis that shows low oil prices are no longer correlated with a slowdown in renewables. The data supports the contention that renewables have decoupled from the price of oil. As explained in a GMO article last February, low oil prices can't stop the growth of renewables. For more than a year we witnessed drastic declines in the price of oil but contrary to conventional wisdom renewables have kept growing.

Clean energy provided more than 50 percent of all the new energy produced in the US in 2015. The Obama administrations fuel standards are decreasing demand in the transportation sector and sales of electric cars have remained steady.

Although the idea that renewables are decoupling from oil's price volatility is not new, this view is being bolstered by recent research.

As reported in a World Watch Institute post, the REN21 2015 Renewables Global Status Report, indicated that as of the end of 2014, renewables represented more than 58 percent of all new additions to global power capacity (134 gigawatts), with investment growing 17 percent to more than $301 billion and creating over 1.4 million renewable energy sector jobs in 2014 alone.

According to a new report 2015 was a banner year for clean energy with investments totaling $286 billion. The report was conducted by Frankfurt School and UNEP is titled, Global Trends in Renewable Energy Investment 2016. The report states that renewables (not including hydro) made up 53.6 percent of the gigawatts of installed capacity in 2015.

In 2015 investments in renewables were more than twice that of coal and gas. Even if oil prices rebound it will not save dirty energy from its inevitable demise, nor will it keep renewables from dominating the energy sector. "No matter how quickly prices recover, the crude oil market is projected to continue contracting for the foreseeable future," World Watch's Philip Killeen said.

By doubling investments in renewables we can save up to $4.2 trillion annually by 2030 and generate between one third and one half of all our energy from truly clean sources. This is the finding in a new report by the International Renewable Energy Agency (IRENA) titled, REmap: Roadmap for A Renewable Energy Future, 2016 Edition.

"Achieving a doubling is not only feasible, it is cheaper than not doing so, REmap shows this is not only the most economic pathway, but also the most socially and environmentally conscious. It would create more jobs, save millions of lives from reduced air pollution and set us on a pathway to limit global temperature rise to two degrees as agreed in Paris."

Investors are and will continue to be attracted by the sheer scale of the opportunity. New research from Bloomberg New Energy Finance research suggests that post-Paris, renewables represent a $12.1 trillion investment opportunity for private investors through 2040.

Renewables will Keep Growing Whether Oil Prices are Low or High