We Cannot Afford to Deny the Cost of Climate Change 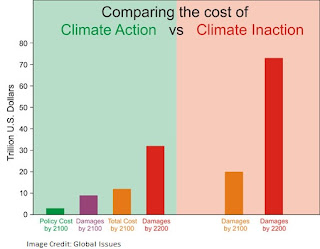 The cost associated with our warming planet are staggering and it will only get more expensive the longer we wait to engage climate action. According to research from ICF International and NextGen Climate America, if we continue with business as usual, climate change will cost the US 36 percent of its GDP by the end of the century. A Citigroup report states that by 2060 the cost of climate change will be $44 trillion. According to research from the International Finance Corporation and Carbon Trust the global cost of climate change impacts will reach between $2 trillion and $4 trillion by 2030.
As reviewed in a Time article, a United Nations report states that between 1995 and 2015 natural disasters alone (including extreme weather) caused nearly $2 trillion in economic losses.

These costs are a national security concern as they exacerbate social tensions and lead to conflict. One study found that high temperatures are driving up rates of civil conflict in sub-Saharan Africa by 29 percent. Climate change is also a contributing factor to the migration crisis which is an economic and social burden that destabilizes governments. A strong argument can be made to support the contention that climate change has already contributed to the rise of ISIS in the Levant.

As explained in a Washington Post article, Iraqi economist Bassem Antoine, said the weather has inflicted serious damage to the country’s economy. He estimates that Iraq’s gross domestic product — about $230 billion annually — has probably contracted 10 to 20 percent during the summer heat. Iraqi officials say scores of farmers across the country have been struggling with wilting crops, and general workforce productivity has decreased. The government has declared multiple mandatory official holidays because of the heat.

The cost of failing to act is far greater than the cost of action. A cost-benefit analysis makes the point conclusively. The math behind climate action is hard to refute. As reviewed in EurActive.com, the global cost of cutting emissions to sustainable levels is estimated at between 500 and 1,500 billion euros (559 to 1,586 billion American dollars) per year.  Whereas when everything is factored the costs of inaction amounts to many trillions per year.

This is one of the salient arguments that may hold sway with some Republicans and perhaps even President-Elect Donald Trump. As explained by Tim Donaghy, a Senior Research Specialist with Greenpeace USA "Trump’s refusal to act on climate could cost trillions of dollars every year." To make matters worse the costs will keep accruing for decades after he leaves office.

Based purely on the economics, Trump's promise to double-down on fossil fuels is a misguided strategy as the world is increasingly turning away from fossil fuels and embracing renewables.

As explained by Donaghy,

"Every year of delay is costing us money, dragging down economic growth, and creating fewer jobs than we could have under a clean energy economy. All of us, but especially younger generations, will be paying these climate costs in the form of higher taxes, higher insurance premiums, higher consumer prices, and more."

According to a 2014 economic report from the Obama White House delayed action on climate change will increase costs through both warmer temperatures resulting in more sea level rise, crop failures, extreme weather and associated health costs including air pollution. Thanks to advances in attribution science we are also getting a clearer idea of deaths associated with climate change.

Delaying action will make it more expensive and less likely that we will ever be able to reign in climate change. According to this report the net cost of climate action increases 40 percent for each decade of inaction.

Global warming is also imposing costs today. This finding is reported in a Global Warming is Real article, which references the work of Berkeley Ph.D. candidate Tamma Carleton and chancellor’s associate professor of public policy Solomon Haiang. Their review of more than 100 scientific studies revealed that there are substantial costs accruing today. As stated by Haiaing:

"So much attention is focused on the future effects of climate change that hardships imposed by the climate today, which are often just as large, are ignored...If we solve these problems today, we’ll benefit everyone, both in this generation and the next...People get so used to hot days, since they happen all the time, that they never stop to consider what those days are costing them."

We have already seen how market forces are driving investments in renewables such that they are eclipsing fossil fuels. The business community sees the wisdom of investing in clean energy as do many others. That is because it makes good economic sense both as a source of power and as a source of green jobs.  A number of studies have demonstrated that climate action can create hundreds of thousands of jobs. Solar is already becoming the cheapest form of energy on Earth and the declining costs of renewables will continue as the uptake grows. This is not about politics this is about energy economics.

It makes no sense for Trump to kill the Clean Power Plan and withdraw from the Paris Climate Agreement. Heads of state, climate scientists and business leaders have all warned Trump not to cancel the Paris Agreement and they have called on the President-Elect to act on climate change.

According to research published in the Global Policy Lab, climate change is slowing global economic growth by 0.25 percent per year.

However, Trump's nomination of Rex Tillerson to be the Secretary of State and Scott Pruitt as the head of the Environmental Protection Agency (EPA) gives us no reason to believe that he is receptive to common sense.

The situation vis-a-vis the costs of climate change may be worse than cited above. This is the view of Nicholas Stern a top climate economist who said the cost of global warming is worse than he orginally feared. As quoted in a Guardian article Stern said: "With hindsight, I now realise that I underestimated the risks. I should have been much stronger in what I said in the report about the costs of inaction. I underplayed the dangers." A decade ago Stern produced a landmark review of the impact of climate change in his capacity as a permanent secretary at the UK Treasury.  Stern reiterates that the costs involved in managing climate change are far less than the costs of inaction.

"We have reached the point where we can now see that the alternative route is not really something that should be regarded as a cost. It is actually a much better way of doing things, even if you had never heard of climate change," says Stern.

Stern says what we do in the next couple of decades are going to be the most "decisive" choices in human history. Stern concedes that Trump wil make things, "very much more difficult."

"We have a lot to do to limit carbon emissions to an effective level. I am confident that it is possible to achieve that, though I cannot say that I am confident it will happen," Stern said.

For more information on the economics of climate action click here.

We Cannot Afford to Deny the Cost of Climate Change