Donde Adam, el personaje de la biblia, primer hombre sobre la tierra, explica su incómoda situación ante el otro único ser humano sobre la tierra, Eva. Desde Extracts from Adam's Diary (Extractos del diario de Adám), de Mark Twain, cuento publicado en 1904.
Perhaps I ought to remember that she is very young, a mere girl and make allowances. She is all interest, eagerness, vivacity, the world is to her a charm, a wonder, a mystery, a joy; she can't speak for delight when she finds a new flower, she must pet it and caress it and smell it and talk to it, and pour out endearing names upon it. And she is color-mad: brown rocks, yellow sand, gray moss, green foliage, blue sky; the pearl of the dawn, the purple shadows on the mountains, the golden islands floating in crimson seas at sunset, the pallid moon sailing through the shredded cloud-rack, the star-jewels glittering in the wastes of space—none of them is of any practical value, so far as I can see, but because they have color and majesty, that is enough for her, and she loses her mind over them. If she could quiet down and keep still a couple minutes at a time, it would be a reposeful spectacle. In that case I think I could enjoy looking at her; indeed I am sure I could, for I am coming to realize that she is a quite remarkably attractive creature—attractive, slender, trim, rounded, shapely, lively, graceful; and once when she was standing marble-white and sun-drenched on a boulder, with her young head tilted back and her hand shading her eyes, watching the flight of a bird in the sky, I recognized that she was beautiful..
MONDAY NOON.—If there is anything on the planet that she is not interested in it is not in my list. There are animals that I am indifferent to, but it is not so with her. She has no discrimination, she takes to all of them, she thinks they are all treasures, every new one is welcome.
When the mighty brontosaurus came striding into camp, she regarded it as an acquisition, I considered it a calamity; that is a good sample of the lack of harmony that prevails in our views of things. She wanted to domesticate it, I wanted to make it a present of the homestead and move out. She believed it could be tamed by kind treatment and would be a good pet; I said a pet twenty-one feet high and eighty-four feet long would be no proper thing to have about the place, because, even with the best intentions and without meaning any harm, it could sit down on the house and crush it, for any one could see by the look of its eye that it was absent-minded. 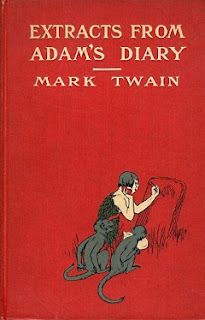 Still, her heart was set upon having that monster, and she couldn't give it up. She thought we could start a dairy with it, and wanted me to help milk it; but I wouldn't; it was too risky. The sex wasn't right, and we hadn't any ladder anyway. Then she wanted to ride it, and look at the scenery. Thirty or forty feet of its tail was lying on the ground, like a fallen tree, and she thought she could climb it, but she was mistaken; when she got to the steep place it was too slick and down she came, and would have hurt herself but for me.
Was she satisfied now? No. Nothing ever satisfies her but demonstration; untested theories are not in her line, and she won't have them. It is the right spirit, I concede it; it attracts me; I feel the influence of it; if I were with her more I think I should take it up myself. Well, she had one theory remaining about this colossus: she thought that if we could tame it and make him friendly we could stand in the river and use him for a bridge. It turned out that he was already plenty tame enough—at least as far as she was concerned—so she tried her theory, but it failed: every time she got him properly placed in the river and went ashore to cross over him, he came out and followed her around like a pet mountain. Like the other animals. They all do that.
Tuesday—Wednesday—Thursday—and today: all without seeing him. It is a long time to be alone; still, it is better to be alone than unwelcome.
FRIDAY—I HAD to have company—I was made for it, I think—so I made friends with the animals. They are just charming, and they have the kindest disposition and the politest ways; they never look sour, they never let you feel that you are intruding, they smile at you and wag their tail, if they've got one, and they are always ready to have fun or an excursion or anything you want to propose. I think they are perfect gentlemen. All these days we have had such good times, and it hasn't been lonesome for me, ever.
Lonesome! No, I should say not. Why, there's always a massof them around—sometimes as much as four or five acres—you can't count them; and when you stand on a rock in the midst and look out over the furry expanse it is so mottled and splashed and gay with color… (Extracts from Adam's Diary, by Mark Twain.)
Vocabulario
Dairy: a place where milk and cream are stored and processed.
Furry: consisting of or resembling fur.
Artículo relacionado
Extracts from Eve´s Diary
Recursos
Extracts from Adam's Diary, audiobook
Tu cuento, o resumen, también importa, estés en Chile o Portugal. Mandános lo que salga de tu cabecita, como lo hago yo: Te duerme, la televisión argentina.

Where Songs Come From: Boy Gone Bad (…
Bauhaus Weaving Workshops: The Histor…
Fantasia 2019 – The Deeper You Dig Re…
Top 10 Benefits of Using a Salon Soft…
International YA Translated into Engl…

6 Ways to Maintain Your Health and Diet While Traveling

Stilettos by a Gravestone