Methodism in the Poldark Novels

Thanks to Chris Barnard and Red Sangre for their photography and original art
Hello fellow Poldark Fans
I've just returned from a very special birthday trip to Cornwall where my husband, along with our traveling companions, went on a Poldark film sites tour.  It was as amazing as it sounds!  Thanks to Chris and Carolyn Barnard, The Magic of Poldark, for a great day!  More about that in another post.  Today I want to share interesting historical information about the Methodist movement and how it relates to Cornwall and thus the Poldark novels.

A Balanced Response to Allen Gwinn
“The Friend Who May Not Seem a Friend…
Short Happiness Quotes From Famous an…
ALBUM: Sun-EL Musician – To The World…
Gulf Islands – On Foot – Part 2
Having read all the books (all multiple times!), I did some research previous to our trip and learned that the original Wesley Chapel founded by John Wesley was in Bristol, in a tucked away complex called The Horsefair.  We planned our trip to fly from Dublin to Bristol and rent a car so it made perfect sense to go find this chapel.  We were richly rewarded for our efforts.
Not only is the Church a beautiful 250+ year old building, it was used in Season Two filming of Poldark!  No spoiler here that Ross goes to trial.  Wesley Chapel stood in for a courthouse. A photo was leaked and is on my Pinterest board (https://www.pinterest.com/bonlet/poldark/) if you should like to see it.
John Wesley and his brother Charles began visiting Cornwall in 1743.  Apparently they were not that well received in the beginning as religious life was "slack."  So where does Methodist come from?  In Wesley's own words, "they resolved to live by rule and method."  So from this they were called Methodists. Apparently he preferred Christian, but in the end he said he wasn't ashamed to be methodical, and the name was accepted. 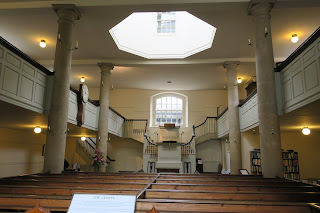 The photo to the right is where Ross stands trial.  I had no idea when I planned to find Wesley Chapel it had any Poldark connection!
Guess it was meant to be. 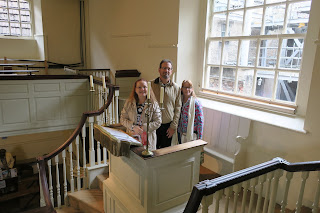 My husband, me, and one of our friends on the trip, Kathy.  Standing in the pulpit. This church is beautifully preserved.

Winston  Graham I think did a good job of blending the history of Cornwall into his fictional tale of the Poldark family.  It's in The Black Moon (fifth book) when Demelza's brothers Samuel and Drake come to visit and ask Ross for jobs that we learn of the "connexion," (members of the new Methodist movement.)

The Poldarks being small gentry have a role in the life of the village and church, but after Charles Poldark passes away, no one takes the responsibility to heart.  Ross seems ambivalent about religion and only attends weddings, funerals, Easter and Christmas services and their children are Christened in the church.

In The Black Moon, Chapter 11 Ross and Demelza are discussing her brothers when Demelza says... "What are your religious views, Ross? Do you have any I wish I knew."  "Oh - practically none, my love." He stared into the sulky fire.  "I imbibed from my father a sceptical attitude to all religions; he considered them foolish fairy-tales.  But I don't go so far as that.  I have little use for religion as it is practised, or for astrology, or for belief in witchcraft or omens of good or ill-luck.  I think they all stem from some insufficiency in men's minds, perhaps from a lack of a willingness to feel themselves utterly alone.  But now and then I feel that there is something beyond the material world, something we all feel intimations of but cannot explain.  Underneath the religious vision there is the harsh fundamental reality of our lives, because we know we must live and die as the animals we are.  But sometimes I suspect that under that harsh reality there is a further vision, still deeper based, that comes nearer to true reality than the reality we know."

"Hm," said Demelza, rocking gently.  "I am not sure that I know what you mean but I think I do."  "When you are fully conversant with it," Ross said, "pray explain it to me."  She laughed.


John Wesley's Political Manifesto rings surprisingly modern with these radical views: reduce the gap between the rich and the poor; seek full employment and discourage idleness; introduce a living wage; offer everyone of age the best possible education; encourage tolerance;   and more.  No wonder throngs of people flocked to his outdoor sermons!

Meanwhile his brother Charles wrote 9000 hymns.  One of my personal favorite Christmas hymns is Hark! The Herald Angels Sing which first appeared in 1739. Another popular hymn still sung in Methodist churches everywhere is "Love Divine, All Loves Excelling."

In World War 11, the part of Bristol where the church stands was almost completely destroyed by bombs.  Wesley Chapel was one of the few places left standing.

John Wesley died in 1791, and soon after the Methodists split from the Church of England.


If you want to know more and how the Methodist jumped the pond and came to America, read this: https://en.wikipedia.org/wiki/United_Methodist_Church

I hope you have found this interesting.  We didn't intend to go on a Methodist Church search while we were visiting Cornwall but we started noticing Wesley Chapel churches everywhere and attended service in St Agnes, the village where we stayed.  Lovely church, lovely & welcoming people too.

Bonny  Wise, I am
Inspired by Poldark


This post first appeared on Inspired By Poldark, please read the originial post: here
People also like
A Balanced Response to Allen Gwinn
“The Friend Who May Not Seem a Friend” – The Cat and the Fire, Post 2 of 3
Short Happiness Quotes From Famous and Unknown People
ALBUM: Sun-EL Musician – To The World And Beyond
Gulf Islands – On Foot – Part 2
Decade Defining Rap Songs Of The 2010s [2010 – 2019]
7 Ways To Help Your Children Embrace Racial Differences
Learn About Juneteenth
10 underrated comics you should read
How Universal Basic Income Gets Attractive As Coronavirus Spreads
Balloch O’ Dee Campsite

Methodism in the Poldark Novels