Hello Poldarkians
Since it is springtime, thoughts turn to the garden and what would Ross & Demelza been growing?  The books mention Demelza's garden (mostly flowers) but occasionally other foods turn up such as apples, radish, french onion, peas, corn, beans, etc.

Although I have now collected quite a few Cornish cookbooks, they were all written in the 1900s, far removed from our 1780s to 1820 time frame.
So I have turned to the resources I have.  For those who are not American, you may not know that Thomas Jefferson (3rd US president, 1801-1809) is considered our first "foodie" president. He was renown as a epicurian and wine connoisseur.  He spent $4,000 on wine the first two years in the President's House!  His mountain top home, Monticello, is near Charlottesville, Virginia and is beautiful.  Although small by European standards, it is magnificent.  I have visited two times.  Jefferson designed Monticello (over a period of years kept changing and improving it)  and has many clever inventions (like a dumb waiter built into the dining room mantel to carry up wine from the basement) and a revolving door with shelves so the servants could take several  platters of food and serve the guests.  I would love to have dined in the Jefferson dining room!
It should be noted that Jefferson was sent to Paris in 1785 to replace the aging Ben Franklin as US Minister to France.  He stayed until 1789.  There's even a movie about it, Jefferson in Paris (1995) with Nick Nolte as Jefferson.  It was during this time he learned of many new foods but also felt that many foods from home were superior such as Virginia ham and Newtown Pippin apples.
He also was an avid gardener (his slaves did all the work of course), but he enjoyed sharing seeds with friends from around the world and kept copius records.  Jefferson ate little meat, so he was very fond of vegetables.  He particularly loved peas and had contests with his neighbors on who had the first crop.
In a "A Rich Spot of Earth" Thomas Jefferson's Revolutionary Garden at Monticello, I found his planting list from 1794. This coincides with our time period for Nampara.
Here's the list:
peas-Charlton
green for soup
beans-lima
snap
cabbage
cauliflower
broccoli
turnips
carrots
parsnips
Jerusalem artichoke
Indian potato
beet
salsafi
horseradish
lettuce-cabbage (head?)
cos
conpleaved (?)
endive - curled & winter
radishes
celery
parsley
spinach
cress
nasturtium
sorrel-French
shallots
leeks
garlick
onion
white mustard
cucumber
squash
melons-citron
pineapple
green
Venice
water
strawberries
gooseberries
currants
artichokes
pumpkin (?)
figs
hops
sage
balm
mint
thyme
lavender
marjoram
camomile
tansey
rue
wormwood
rosemary
hyssop
marshmallow
This is an extensive list and would have been an amazing garden (of which they have recreated). It is easy to assume the uses for many of these - hops for beer, citron melon for baking, the herbs to flavor foods and possibly to make salves, medicinal purposes, etc.

There have been several books to come out recently that highlight what was going on in the 18th century and plant collecting (remember the magnolia that Hugh Armitage bestowed on Demelza? It came from America).

In 1733, colonial farmer John Bartram shipped two boxes of precious American plants and seeds to Peter Collinson in London and a bountiful relationship developed.  Around these men formed the nucleus of a botany movement, which included famous Swedish botanist and taxonomist Carl Linnaeus; Philip Miller, bestselling author The Gardeners Dictionary (1787); and Joseph Banks and Daniel Solander, two botanist explorers, who scoured the globe for plant life aboard Captain Cook's Endeavor.  These "brother gardeners" shared a wild passion for plants. As they cultivated exotic blooms from around the world, they helped make Britain an epicenter of horticultural and botanical expertise.  The Brother Gardeners paints a vivid portrait of an emerging world of knowledge and gardening as we recognize it today."

In Founding Gardeners, The Revolutionary Generation, Nature and the Shaping of the American Nation by Andrea Wulf, we learn about George Washington, Thomas Jefferson and John Adams and their gardening and how they believed agriculture would be what made America successful.  It's in this book I learned about John Bartram, nursery man to the presidents and the world.

While reading I learned about Bartram and that his nursery near Philadelphia still exists!  For more information, go to: http://bartramsgarden.org/history/   I definitely want to visit someday.

Jefferson and Adams while in England went  on a tour of the countryside.  What I remember most is that they had a revelation while doing so: "they could find species in the woods of America and transplant them to their gardens!"  Seems so simple but it was a revelation to them.

If you love gardening and history, these books are worth your time to read.  I have on order Founding Foodies, alas not by Wulf but by Dave DeWitt.

In reading a heritage of British cooking I read that the earliest foods (and customs) came from the Saxons, ie eating what was found in the woods - deer, wild boar, partridge, hare & rabbit and fish from the streams and then what could be found in the fields and woods - wild strawberries, blackberries, sour crab apples, cobnuts (part of the hazelnut family) & fungi.  Bees were cultivated for honey and that they made cheese and butter and began to store barley, wheat and oats.


This narrative goes on to say that the pigs were long-nosed and skinny and that the cattle & sheep were long haired.

Then William the Conqueror brought new ideas and traditions.   The breads were better, they used herbs and spices (ginger, cloves, nutmeg and cinnamon) in their foods and kept salt and pepper on their tables!

If you would like to try heirloom gardening, there are several sources.  seedsavers.org, rareseeds.com, and from Thomas Jefferson's Monticello www.monticelloshop.org  I have grown many seeds into plants from Monticello over the years and highly recommend their catalog as well.

The best known cookbook of the 18th c was definitely The Art of Cookery Made Plain and Easy, by Hannah Glasse (1708-1770) published in London.  Like Jane  Austen, the original edition said "By a Lady".  20 editions were put out in the 18th c alone and continued to be printed long after her death until 1843. 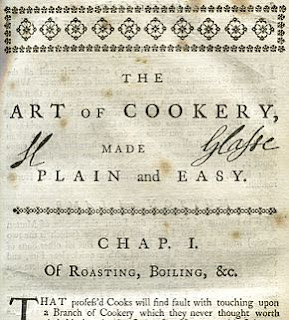 So my guess is if Demelza had a cookbook at Nampara, this would be it! Facimilies are available.  I just ordered one from Abebooks (my new best friend it seems!)  Karen Hess, who also brought to our attention that Martha Washington's Booke of Cookery laid dormant waiting for someone to bring it to light had a hand in The Art of Cookery Made Plain and Easy as well.

While the men were off fighting wars, or on adventures like our Ross Poldark, it was the women who literally kept the home fires burning, tended to the children and the larder, etc but little is written of them.  Indeed many did not read or write, but Martha Washington burned the General's letters after his death!  So what we have of them is often anonymous ie quilts and clothing, recipes handed down.

From The Angry Tide: "What have you been doing while I have been away (Ross to Demelza)?  "What have I been doing? Demelza stared at him in indignation at the change of subject.  "Seeing to your mine and your affairs, of course; trying to bring up your children in the way they should go! Doing all the ordinary things of living and breathing and - and looking to the farm and the rest! And - and waiting for your letters and answering'em!  Living just as I have always lived - but without you!  That's all I've been doing."  He was away from home eight months.........


To learn more about the Great Gardens of Cornwall, visit: http://www.greatgardensofcornwall.co.uk/  Cuby Trevanion's Caerhays is one of them!

Since I always have food featured I am including two dishes my grandmother always made with first of the spring goodies from the garden.  They seem to have all the ingredients available to Demelza at Nampara: wilted lettuce salad and new potatoes and spring peas in white sauce. 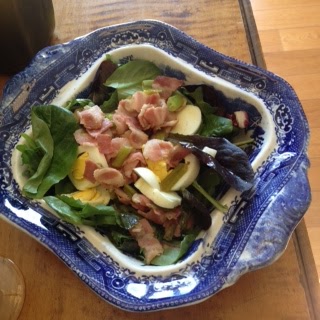 Wilted lettuce Salad
Make with spring leaf lettuce blend (from your garden or the store).  Hard boil a couple eggs first.  After the eggs have cooked, slice them and place on the salad. Slice two green onions with some of the top and chop a couple pieces of bacon, add these to a skillet and fry the bacon with the onion (turns out the fattier the bacon the better as you want the grease), add a little water, a 1/4 c. vinegar (apple cider) of which a 1 T of sugar has been dissolved in and bring it to a boil and pour over the salad.  Eat immediately. 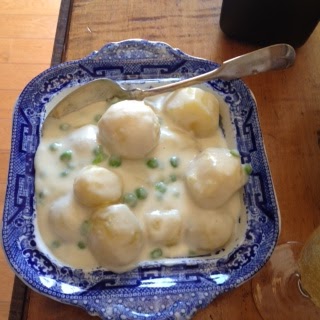 New Potatoes and Spring Peas
"New" potatoes meant newly dug while they are still quite small. These are from the grocery and are too large really.  Spring peas also meant first of the season peas.  Buy the tiniest potatoes you can and gently boil them and when cool enough peel off the skin.  If using fresh or frozen peas, pre-boil, set aside.  Make a white sauce: 1/2 stick unsalted butter melted in a sauce pan, take off the heat and whisk in 1/4 c. flour and thoroughly whisk, put back on the heat and add enough whole milk to make a nice white sauce (approximately 1 1/2 c).  Add the peas and potatoes and gently cook until hot, add salt and pepper to taste. 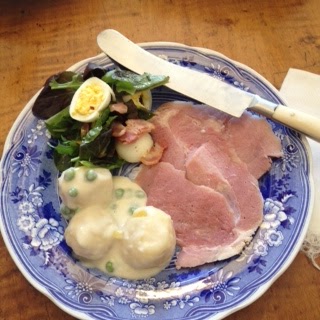 Serve with ham or meat of choice.  Also, I uncorked the Ginger Beer and OMG, you would think there was champagne in there! Still good and very bubbly and it is approximately six weeks old!

I hope you have enjoyed this blog as much as I have enjoyed putting it together for you to read.
Please leave comments so that I will know someone is reading these and if you have ideas for future blogs, I would love to hear them.