Thanks to Chris Barnard and Red Sangre for the photography and artwork!
Hello from the other side......oh Adele how I love your new CD!
Sometimes my baking and ideas take a turn, so I am not giving you what I promised last time!  Does it make a difference?

health benefits of almonds
Christmas gift ideas for 2021
Karen S. Wiesner, Tension and Twists,…
Bobby Rush 50th Anniversary ‘Chicken …
14 Best street food in Lagos you need…
Have you heard of a drink called Geneva? It apparently was gin with a Mint flavor.  A book I have says it dates to at least 1773.  How interesting is that?  I like making simple syrups so I chose to make a mint flavored simple syrup which was delicious.
Simple Syrup recipe:
1 cup water
1 cup sugar (I used white)
2 handfuls of mint (I left it whole, but it could also be chopped)
Place in a sauce pan and simmer for approximately 20 minutes.  Let the mint stay in the whole time to release as much flavor as possible.  Cool and strain and place in a covered container in the refrigerator.  It will keep for about a month.
Basically I made a Geneva Cordial: 1 jigger Gin, 1 jigger mint simple syrup. 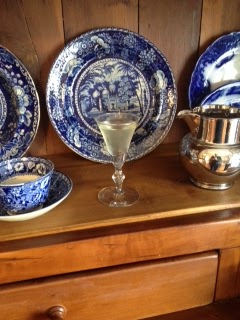 For my Jane Austen Society meeting on Sunday, I made Easter Biscuits (a thin cookie) and thought they were very tasty.  Apparently this is a common treat in the West  Country (Cornwall included!)  We serve afternoon at our meetings, so treats, either sweet or savory are always eaten. For more information about the Greater Louisville Jane  Austen Society (www.jasnalouisville.com)  Yours truly was the founder.  We also have a wonderful Jane  Austen Festival which is held in July at a beautiful 1790s farm just six miles from downtown Louisville.  Come and pretend you are in Poldark country.
Easter Biscuits
3/4 c. all-purpose flour
1/4 c. rice flour (can be found in the organic section of the grocery, ie Reds Mill)
1 tsp. allspice
4 oz/1 Stick Unsalted Butter, softened
1/4 c. (4 oz) sugar
zest of one lemon
2 egg yolks
1/3 c. currants*
1 T. brandy
For the topping:
2 egg whites, lightly beaten
2 T raw sugar
Makes approximately 20 biscuits
Preheat oven to 350.  Grease or spray two sheet pans.  Sift together the flours and spice. Beat the Butter and sugar until light and fluffy, add the yolks one at a time. Add the currants (I soaked them in the brandy to soften them) and lemon zest. Turn out Dough on a floured surface and knead gently until smooth.  I found this to be a very wet dough and kept adding flour.......  Roll out to a thickness of 1/4 inch and cut into 4" rounds using a fluted cutter.  Place on prepared trays and brush with the beaten egg white and sprinkle with raw sugar.  Bake for 15-20 minutes until crisp.  Remove from the oven and leave to cool on the trays for several minutes before removing them. They improve with age if they last that long. 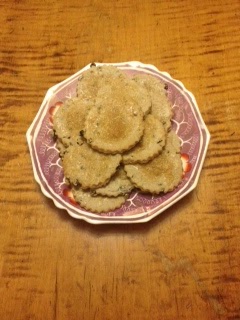 In the books pasties are mentioned, often Rabbit Pasty.  Rabbit meat is not easily found where I live, but for a use like this, the meat needs to come from young rabbits so it is tender, not tough.   My grandparents raised rabbits for a few years and my grandmother always cut it up into pieces and gently fried it.  I thought nothing of eating rabbit until I took some to a gathering and people were dismayed I ate rabbit!  I grew up in the country, we also ate squirrel. Grandmother fried it and made a white gravy and biscuits.  We lived next to a woods, it's just what people did then.
Anyway, my recipe for Rabbit Pasty is actually made with boneless, Skinless Chicken Thighs, a meat similar to rabbit.
Demelza's Rabbit Pasty
Pasty Dough:
5 c. all-purpose flour
2 1/2 oz lard
1/2 stick unsalted butter, cubed
1 tsp salt
water with ice cubes in it, approximately 1 cup
1 egg to make a "wash"
Place flour and salt in a medium sized bowl.  Add the lard and butter and work in with a pastry cutter until size of peas.  Make a well in the center and with a fork begin stirring in the ice cold water until it is just mixed.  Gather together and gently knead a few times on a lightly floured surface.
Divide dough in half or 1/3.  I divided in half and the pasties were HUGE! We could only eat half of them.  Preheat oven to 400.  Do not be put off by the lard!   The lard made the dough so flaky and delicious... my grandmother always used lard in her pie dough and her pies were the best.  A recent article I read said lard is better for you than the "shortening" products because it is a natural product whereas shortening is hydrogenated to make it shelf stable.  Lard just sits in its little box on the shelf and stays somewhat solid.
For the filling:
3 boneless, skinless chicken thighs, roughly chopped
1/2 turnip, diced
1/2 large parsnip, peeled and sliced
several large mushrooms, sliced
1 carrot, sliced*
1/2 onion, diced
season with salt, pepper & thyme to taste
Place all ingredients in skillet with a couple tablespoons of butter and lightly saute, set aside.
Roll out pasty dough to size, place filling in center and then crimp edges like making a pie.  Whip the whole egg with a fork and brush the top of the pasty with the egg.  Put pasties on baking sheet and bake until brown, about 40-45 minutes. 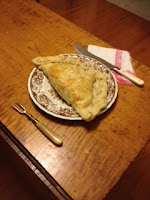 We thought these were delicious!  My husband said he would have preferred peas to the carrots.  The parsnip flavor was divine, but I love parsnips. I think they are an underrated vegetable.  Right now brussels sprouts seem to be all the rage, perhaps parsnips are next? You heard it here first!
I now have my "Poldark" 1790s dress completed.  I used a Sense & Sensibility Pattern.  The very fine white fabric came from Burnley & Trowbridge in Williamsburg, purveyors of fine fabrics.  I have just about finished  the embroidered garters.  Remember that scene in Warleggan when Ross brings home garters for Demelza?  Cannot wait to see that in Series 2!
"She held the garters in her hand, and he took them from her, so she sat down uncertainly.  She was wearing stockings tonight, old ones, but they were black and her skin above them glistened like ivory.  He put the garters on with a good deal of care. It was months, almost years, since there had been this sort of thing between them, that odd fusion of desire and affection for which there is no substitute.  Her eyes in the gathering darkness glowed at him.  They stayed for a while hardly moving, he kneeling and she leaning back in the chair.  His hands were cool on her legs.  Remember this, she thought. In the times of jealousy and neglect, remember this.  He said: "So you are not to be rid of me, my love."  "I am not to be rid of you, my love."  (be still my heart!)
Here's the dress: 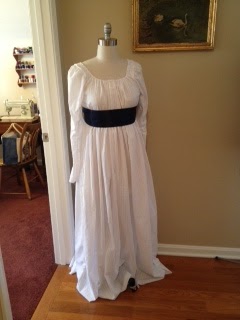 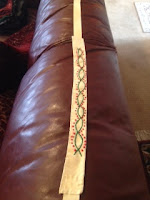 A simply embroidered garter made of silk taffeta.  I chose bright colors because I want them to be seen through the fabric. This idea is based on a authentic illustration in Napoleon and the Empire of Fashion book. I will have to see if my husband, aka as My Mr. Darcy wants to put them on me.


Okay, until next time!  I have purchased the ingredients to make Ginger Beer and want to make Madeira Cake, Cornish Black Cake and more.....

I hope you enjoy what I am doing and if you have any suggestions for me, please feel free to leave them and share my blog with friends interested in Poldark!

Bonny Wise, I am
"Inspired by Poldark"