Thanks to Chris Barnard and Red Sangre for the photography and art.
Hello

I continue to be inspired by Poldark and British cooking and keep adding cookbooks to my collection.  I fear I will gain back the weight I lost! I do love to bake...and then you have to sample.  So far my plan is to bake and after sampling give the rest to my children or take it to where I work. Free food always is a nice thing : )

I came upon an interesting recipe for a Pear and Ginger Bread.  I made some additions and subtractions and came up with this.  Very full-flavored.  The recipe doubles well but I warn you to put it in a extra large loaf pan or it will go over the sides of the pan like the first time I made it.

Preheat oven to 350.  Grease or spray a loaf pan.  Sift the flour, dried ginger,  & soda,  add lemon peel and set aside.  Either by hand or in a mixing bowl, mix butter, brown sugar & honey.  Add egg.  Add flour mixture and mix together thoroughly, add milk or buttermilk.   By hand add crystallized ginger and pear.  Put in the loaf pan and bake approximately 55 minutes.  Cool on rack. Warning, sinks a little in the middle while it cools.  Turn out and when thoroughly cool wrap in cling wrap. Keeps well several days (if it lasts that long).  This is one of those breads that seem to be better the day after you make them. 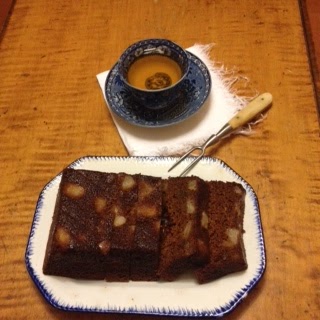 What kind of tea were Ross and Demelza drinking at Nampara? The only time  I recall a specific tea being mentioned is in Warleggan.  Ross comes home and gives Demelza a pound of "Soachong" tea. "It is better than the stuff we get through Trencrom.  I thought you'd like to try it."

How to prepare mango leaves for diabe…
Christmas gift ideas for 2021
Karen Wiesner: The Stories Behind Cla…
Homemade No Churn Raspberry Ice Cream
"Souchong" is a smoky black tea from China. Very aromatic and seems appropriate to be sipped beside the hearth at Nampara.
Ginger Beer
While we know that Ross and Demelza made beer at Nampara ie the timely fermentation accident in Warleggan(!), Ginger Beer may have also been a staple as well.  Doubtful it is really "beer" at all as the alcohol content is negligible.
This Recipe was found in a magazine that adapted the recipe from "cask" size to two quarts.  The original recipe is from The Virginia House-wife, by Mary Randolph, 1824
1 1/2" fresh ginger, peeled and grated
2 quarts spring water
1 c. brown sugar
1 T. fresh Lemon juice
2 T. cream of tartar
1/4 tsp. dry yeast
Grate the ginger to equal 1 T. of compressed pulp.  Bring water to boil and stir in brown sugar, lemon juice, grated ginger, and cream of tartar.  Allow to cool to lukewarm before adding the yeast.
I left this liquid in my stainless steel stock pot. Covered it with cling wrap and put the lid on tightly and left it on the dining room table for 36 hours or more.   The recipe as I found it decanted it into a two litre container.  I dislike using plastic.
After 36 hours, strain the ingredients (using cheesecloth) into a clean bottle and cap it.  Place it in the refrigerator.  This will stop the fermentation process.  This lasts for quite some time.  You will get a nice little "pop" sound each time you uncork it.  The original recipe said it will turn clear as champagne after 10 days... mine has not yet, but I do not mind.  I did find after a week in the refrigerator the Ginger Beer had "popped" it's cork! 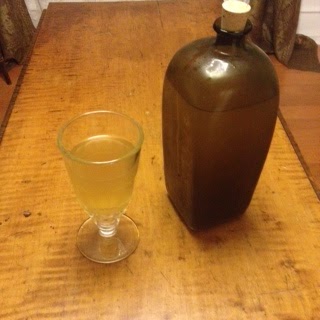 The bottle was purchased from the Locust Grove gift shop where I work.  It is a handblown replica of bottles of the period.
If you are interested in 18th c. cooking, a company called Jas. Townsend & Sons, has a wonderful DVD series on 18th C. Cookery, they are only $8.00 each.  Lots of recipes and tips on how foods were prepared and why and also rations for soldiers, British and American, during the Revolutionary War.  You can find them at www.jas-townsend.com
Madeira Cake
Very popular in the UK and in Cornwall.  I was so surprised there isn't any Madeira IN the cake! You drink Madeira while eating it.... fair enough I say!
I have only made this once, but will definitely make it again.  Found out that there is a difference in sugar.  Many recipes in the UK call for "caster/castor sugar" while in the US we use granulated sugar.
I finally found castor sugar at Fresh Market- it was $5.99 a pound!  It is very fine and looks to be superior for baking, so I am anxious to give it a try.  I just did a little research and an idea I had was confirmed.  You can make your own by placing granulated in a food processor and whizzing it around a few times.  Be careful not to turn it into powdered sugar though!
Recipe for Madeira Cake
1 c. butter, unsalted, room temperature
1 c. sugar, I used granulated, but will use castor sugar next time
4 eggs, room temperature
1 T. lemon juice
1 tsp. lemon zest
1 3/4 c. flour
1/4 tsp. baking powder
1/2 c. candied fruit peel, finely chopped* I used orange
2 tsp. flour
Directions:
Preheat oven to 300.  Grease or spray a 9 x 9 pan.  Cream butter and sugar until fluffy.  Add eggs one at a time, then lemon juice and zest.  Mix together flour and baking powder.  Toss fruit peel with 2 tsp flour and fold into the batter.  Bake for 1  hour, or until cake tests done.
I found this cake to be extremely white, so I placed it under the broiler for a few seconds to give it some color.  In the 18th & 19th century a salamander would be used.
* I could not find quality fruit peel (glace) locally, so I ordered from Amazon. The brands were Olive Nation and were approximately $10 a pound.  One was $11.99 a pound but I'm not sure which one.
Okay, onto Madeira.  Named after the Portuguese-owned island where it is made, Madeira is a distinctive fortified wine that subjected to a lengthy heating process during maturation.  It can range in color from pale blond to deep tawny and runs the gamut from quite dry to very sweet. (Food Lover's Companion)
The one I was able to find at the local liquor store was "Rainwater Madeira" by Sandeman, since 1790.  "Rainwater Madeira" was so named in the 18th c. because it is as soft as rainwater and the colour of straw, glistening after a shower of rain." (from the bottle)
The bottle says the fortified wine was improved by the long hot journey across the Indian Ocean. 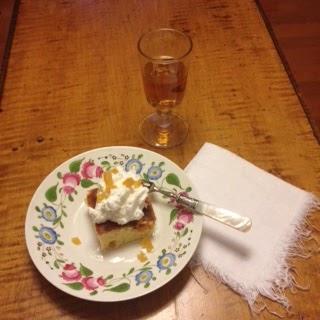 This cake improves with age! Since there are only two of us at home and we are trying to watch our weight, it sat covered on the counter for nearly a week and the cake kept getting better!  I made my faux clotted cream and chopped some additional orange peel and it was a lovely dessert (especially on my 1820s porcelain plate!) and as you see a little Madeira was enjoyed with it as well.


I have no fashion news to report this time around, but on one of my Facebook groups we discussed what kind of hat would Ross switch to once the tri-corn became unfashionable (by1800).  I found this painting of the period and thought of Ross Poldark, gentleman farmer. This is dated 1795.  Too bad about the tri-corn, as Aidan Turner wears a tri-corn quite well I think! 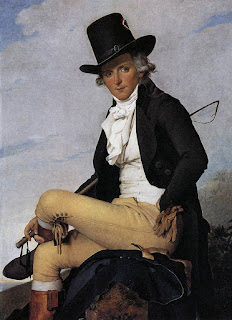 "He put the scythe on his shoulder and tramped over to the hayfield…… At noon they stopped and sat in a group  and took long drinks of buttermilk and ate rabbit pasties and barley cakes...." (Ross Poldark)


Thanks for reading and I'll make no promises what comes next!