Thanks to Barnard Photography and Red Sangre for their photography and art.
Hello Poldark fans
Have you wondered about Ross's Military experiences?  There are subtle hints in the books, mostly in the prologue of the book, Ross Poldark.

Short Happiness Quotes From Famous an…
Batman vs The Predator I An fine exam…
Globe Business Teams Up with 150 Ente…
WHY YOU SHOULD INCORPORATE CUSTOM LAP…
How to Leverage Entrepreneurship and …
I asked a Facebook friend who goes by John Gimlett (get it?) who was in the military to contribute to this blog.  I hope you enjoy reading his comments. When appropriate I will insert copy in BOLD from the prologue to supplement what John is telling us from the book, Ross Poldark.
Ross Poldark's Military Career 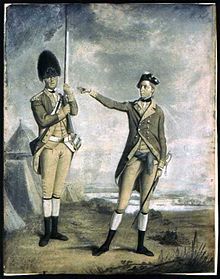 Uniform of the 62nd Foot.  Possible uniform of Ross Poldark?
I've always been interested in history and that includes what did people eat?  Rations for American and British troops were remarkably similar.
Jas. Townsend & Son is a purveyor of reenactor goods, ie clothing, tents, books, as well as what you need to cook over a fire. They also have a wonderful series of videos of 18th c. cooking.  The first in the series includes cooking for Rev War soldiers but British soldiers received the same kind of rations. This remained essentially the same for over 150 years.
There were rations per man, per day; per man, per week, and per company.
Meat - 1 lb beef, fresh or salted
3/4 lb pork, fresh or salted
1 lb fish, fresh or salted
1 lb loaf of bread, or flour (an even cornmeal)
1 pt. milk
1 qt. beer
Per company rations would include candles and soap.  Rations would also include dried peas or beans, rice and vinegar.  Soldiers would procure locally from village or farmers or even berries from the woods.
It was Napoleon who said "an army marches on its stomach."  Keeping troops supplied must have been a huge challenge for both sides, but I would think especially so for the British.  Fresh bread would surely have not been practical so soldiers probably were issued flour.
With the flour they could make fire cake or ash cake.  In the Jas.  Townsend video they show how soldiers make the cakes on bannock boards, use leaves so the cake could be placed in the ash bed or just on the ash bed.
Watch how on this video: https://www.youtube.com/watch?v=qUt1ZHs3wQ8&list=PL567A0227C741A096
18th c cooking
I have an interesting cookbook, Pease Porridge: Beyond the King's Bread, Cooking at Fortress Niagara, 1726-1865 by JoAnn Demler (2003)  This cookbook covers the French occupation, then British occupation and finally the American occupation of this fort. Fort Niagara is the oldest military site in North America and is located in Youngtown, New York.
We were always a camping family so I have always enjoyed cooking over the fire.  I recently made Ration Stew, Soda Bread and an Apple Pie one afternoon.
Here are the results: 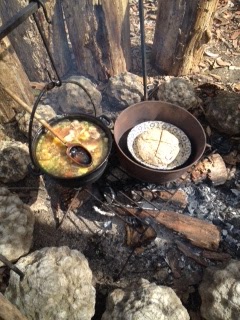 Ration Stew on the  left, beef, carrots, potato, cabbage and peas.  I precooked the beef to insure it would be tender and I did add beef broth.  On the right, Soda bread before the top of the dutch oven is placed and on which coals will be heaped so the baking action is from the top and the bottom. 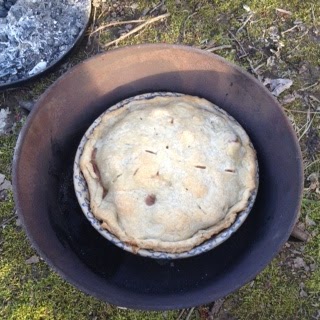 Apple Pie... using pasty dough recipe (lard & butter).  Sliced apples (left skin on), 1 c. brown sugar, plus 1 T minute tapioca (can omit for authenticity but helps thicken the juices).
After the soda bread was done, the pie went in the oven for about 1 1/2 hours as the fire was really dying down by this point.
It was very tasty!
We know Ross comes home expecting to find Elizabeth waiting for him, but that is not what happened.  I particularly enjoy knowing what Ross, Demelza & Elizabeth "think" as well as what they say.  Here's my slightly edited for brevity version of what it was like when Ross returns home to Cornwall.

October, 1783 Ross Poldark returns to Cornwall in a carriage with Dr. Halse who remembers him from school who confused him with Francis.  “You will remember my cousin more clearly,  He stayed on.  I felt, quite wrongly, that at thirteen my education had gone far enough.”  Dr. Halse : Ross Poldark. Well, well, You’ve changed. I remember now,” I  had to thrash you at frequent intervals, and then you ran away.”  “Yes, Poldark turned the page of his book, “A bad business, and your ankles as sore as my buttocks.”
Dr. Halse describes Ross: unusual face with strongly set cheekbones, wide mouth, and large, strong white teeth. The eyes were very clear blue-gray under the heavy lids that gave a number of the Poldarks that deceptively sleepy look.
The coach pulls up at the Red Lion Inn in Truro. Jud had not come to meet him as planned. He goes to see Nat G. Pearce, Notary. He asks about his father’s estate and finds there is little to inherit. A slow smile crept over Ross’s mouth; it made him look younger, less intractable.  He received the will to take  home and read.
Chapter Two
Ten people were dining at Trenwith House. Ross arrives to everyone’s surprise. Verity greets him and then he sees Elizabeth. He sees Francis and remembers at school they were called the Fair Poldark and the Dark Poldark.
He reached Elizabeth, “Well, Ross,” she said softly.  His eyes feasted on her face. “This is most opportune.  I couldn’t have wished it different.”  “I could, she said. “Oh, Ross, I could.” “I almost called to see you tonight,” Ross said to Elizabeth, “but left it for tomorrow. Self-restraint is rewarded.”  “I must explain. I wrote you, but….”
He finds out the dinner is a celebratory one  f0r Francis & Elizabeth…. He decides to go and drinks three glasses in succession and the fourth he gave a toast “To Elizabeth and to Francis… May they find happiness together.”
As Ross leaves Elizabeth says, “I’m so happy you’re back, Ross. I had feared, we had all feared… What can you think of me?”
As Ross rides home: His was not an easy face to read, and no one could have told that in the past half hour he had suffered the worst knock of his life….. They had been in love since she was sixteen and he barely twenty.  … He had gone away eager for fresh experience and sure of the one circumstance of his return that would really matter…. No doubt was in his own mind, and he had looked for none in hers…. He moved on. Occasionally the feeling within him was so strong that he could have been physically sick.
He finally arrives home and yells for Jud.  He finds Jud and Prudie dead drunk locked in each others arms.  He fetches water and soaks the bed to wake them up.  “Dear life! Is it you, Mister Ross?”  “From the grave,” said Ross. “And there’s a horse to be seen to. Up before I kill you.”
I hope you have enjoyed this blog and my thanks to John Gimlett for his contribution!
Bonny Wise, I am
Inspired by Poldark

WHY YOU SHOULD INCORPORATE CUSTOM LAPEL PINS IN YOUR BUSINESS