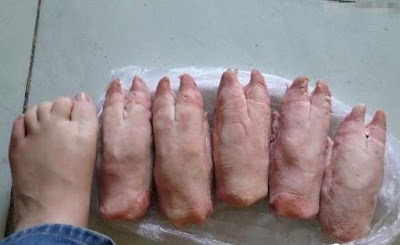 The refrigerator opens to the neighborhood of tired
watermelon chips
Up or down the steps tiled with anteater's tongues
It's at the restaurant where we all love to eat
Eat at CHEZ RIEN
Male waitresses to take your disorder
Drive-by constipations attack like home-made fast food restaurants
Where and what are the couch potatoes or the athletes?
Honey-roasted blunts for the hard-boiled craniums
Rolled with copies of this poem
Five-dollar pitchers of water, corn syrup, and diarrhea-concentrate
Slices of tar-smoked lungs appetite the family of 6-packs
The cigarettes and cigars rolled with spinach leaves

Cyanide swells in the broccoli's salted cavity where the flies the breathes
and the vegetarians reside
Falafel versus or fornicates with the side order of eggs and scapula
Gin & tonic to cool the carry-out's kidney failure
On the top shelf-life, the tapeworms will tie bow-ties into the
forty -ounces bowl of presweetened cereal
On the bottom, safety-sealed packages of dish water fish
The brains congregate around the apples, the mangos $ the kiwi-fruit
The genitals around the LSD

Now the dimebags of tofu and variously shaped M's...

The cooks are hut-buttered tumors and start wildin'
Farts flare out like a decaffeinated philosophy
Sweat peas & crack pipes on the run from undercover pesticides
Microwavable speeches rise from the undersides of buttermilk waffles
(Shhhh.. don't tell anyone, but I smoke crack-on-the cob)
Indigestive introspections collide on the carrot-tip of the veal's
lean heart attack


To top it off, the marching bouquet of cauliflowers will conduct the chorus
of candied oxygen in a line mended pledges such that all previous
appetites will fall prey to each other and the rest. Ice cream, like
excrement lik beef, will give the dental check-up, my FDA approved
freebased is now NIGGA approved. And. Listen carefully. Listen carefully
to the spring water (who, by the way, is the tap water's twin sister), she will
tell you everyanynothing about the all-natural nicotine-fit dining in the
non-smoking section of the weed-smoker's smoking section, all this like a
growth of chocolate bowels

Yacht Brinson was the author of Different Dimensions published by Double Negatives Press. The work was published in 1993. Brandon was a significant member of the poet's community in Washington, D.C. during the 90's. He worked at the Kinkos on Capital Hill and served as a designer, editor, reviewer, and publishing assistant for countless poets. His sense of surrealism was highly refined as the poem above shows. He died in the late nineties as from AIDS. Members of the poet's community remember and honor him. He is a great representative of Free Black Space. Thank you Yaphet.