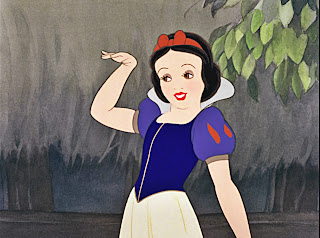 Simple enough, we begin with God breathing light into darkness. The first light is the great white light. There's darkness before, but what does it matter. Think about the white light. Imagine it is snow. White like snow or white like skin. We have traveled a long way now. We link the metaphors one to another. They are a form of traveling, a bridge from one moment to the next. A bridge between images. They are focus. The background fades. You understand what you do not know. You travel deeper. You see clearer. You see what has been engineered.

But snow is not constant. There are certain places without it. Certain places where it doesn't really exist. Snow is not constant. So when I say she is white as snow, like snow white, I am imagining that she is like the white of snow. Her skin somehow bright like the light. On one level it doesn't really work. I mean she ain't white like snow, nobody is. But we'll take the comparison in abstract.

If we add a simile we can say white as snow. What here is the measure of comparison? The measure of comparison is the white. A rather dangerous word in the abstract. There really is no she as white as snow, but the metaphor/simile still seems to work. For the skin is a bit paler than the white snow. No skin shines that bright. The connotations of purity help us some. The absence of blemish too. White is a certain sense of purity. It is posed to be different from the purity of the pitch black night.

It works because white as a word has beneath its denotation and meaning an iceberg like mass that grows and grows underneath the water. White could mean almost any man or woman from Europe on the day they arrive to America without a lick of English freshly tanned from time spent in the Mediterranean. Somehow white becomes the opposite of everything else with a color. It's category seems to grow, while the other categories seem to get dwindled into the increasing size of the opposite. All opposites are dark and good as black.

But what if we don't know snow? Then what of snow white? Does the metaphor work when one of the cultural elements is outside of a culture's conceptual framework or image base? How does a comparison between familiar elements, differ from a comparison where one is only familiar with one of the elements, or not familiar with either of the elements and simply knows the unit of comparison. It is indeed possible that one could be exposed to a metaphor that is completely alien. One could be exposed to a metaphor where they lack knowledge of the unit of comparison and the elements compared.

In these instances the reader would have to use a dictionary to define the terms they are unfamiliar with or receive such definitions from a speaker with such knowledge. In such instances, the metaphor will not resonate or shine as bright, because metaphor's genius is found in its trajectory towards making sense.

The magic of metaphor is to make the abstract resonate as sensory perception.

Sense is allusive, especially for the intellectual. The mystery of sense grows in the age of science where people find themselves walking around with cel phones linked by invisible waves. Many of our technological advancements defy our sensory perceptions-verifying things are not what they seem. If things are not what they seem what are they? In this way the focus on STEM research is connected to a distrust of our senses, which also suggests a distrust of language. In some ways this distrust is good. Within society it reflects an urge towards greater reconciliation between linguistic elements and our quest for understanding the world around us. The realms of creation and innovation seem limited to the world of physicality when in reality our current quest towards the sciences demands an even greater need for metaphorical invention. For metaphorical invention is capable of bridging the divide between the abstract and sense.


Metaphor's reality is connected to the nature of sensory perception. Metaphor's function as a bridge between the known and the unknown clarifies the relationship between the leveraged truth of the senses and other elements. Though much of what we see is illusory, we do in fact see, feel, taste, touch, hear, and smell. It is necessary to explore and link the truth of our seeing with the infinite range of realities around us. Of all linguistic tools, metaphor most accurately enables us to this. The great metaphor packages in simplicity a variety of connections between things that are seemingly unconnected. Metaphors are fundamentally about seeing-sensing. In metaphors the seeing of the images or ideas within the current spectrum are the known and the new way of seeing, the connection between elements is the unknown. The metaphorical bridge carries you across.

Aristotle suggests that metaphor is genius that cannot be taught. It is a strange conclusion for such a scientific person, but one that has seemingly held its weight for generations.

It is important to note the rule and law of science is the rule of connectedness. To suggest that there are scientific laws in operations through the earth and universe is to use the law and principle as a statement of interconnectedness. Though humans aspire to mirror such actions in our construction of the systems of society, we are mostly convinced that our laws are incapable of operating in the same way. Nature's interconnectedness is constantly "discovered." What nature does is revealed from beyond the veil of human perception. Our approach to nature implies exploration. What is revealed becomes something in the world of humans though it existed prior. In many way nature defies metaphor. Nature does not need metaphor or simile. Nature simply is; however, nature as concept in the world of knowledge-the world of humans hinges on comparative elements that describe it's scientific elements. For this reason Thomas Kuhn in his legendary work the Structure of Scientific Revolutions refers to portions of science as a puzzle solving activity. The metaphor is enlightening and helps clarify the distinction between the world of knowledge and the world of nature. As humans bring portions of the world of nature into the domain of knowledge they create pieces of puzzle. The process is never ending. For to truly solve the puzzle would to be at one with nature-to be god-like-knowing where each piece of nature fit together into the awe-inspiring larger than life thing that is nature. Alas, even in science metaphor has it role. In James Geary's I is an Other: the Secret Life of Metaphor and How it Shapes the World We Live In, he states a similar point when he discusses the role of analogy in the realm of science

The analogical form of metaphor is especially useful when scientists communicate new discoveries. The history of science is, in fact, the history of good analogies. in 1665 , Robert Hooke published Micrographia, his observations through a primitive microscope of everything from fly's eyes to pieces of cork. He was the first to observe that plants consisted of formations of small compartments, which Hooke called "cells" because of their resemblance to the rooms in which monks lived in monasteries." (Geary 169)

The point is simple and obvious. The puzzle is the place of the knowledge in the world of humans. Nature is not a puzzle, but a puzzle to humans. Discovery and invention are metaphorical precisely because a way of seeing things not previously known must "be carried across the metaphorical bridge" to borrow a phrase from Dr. Valerie Prince. Metaphor's utility is not simply a matter of language; but a fundamental part of knowing. We compare the unknown to the known. We name in reference to what we already know. Metaphor does not simply aid science, but is hidden science. If science unveils connections; metaphor is cognitive and linguistic science of creating the tools to actualize the connectivity in the world of human knowledge.