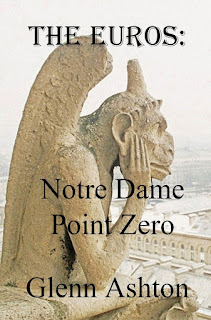 Months before the vicious terrorist attack on Paris, my latest thriller The Euros: Notre Dame Point Zero, was self-published on Amazon’s Createspace. The elevator speech for The Euros is:
How would you rescue women and children held hostage in Notre Dame Cathedral in Paris by a band of faceless, nameless and ruthless men, who have attached bombs to each hostage, and threaten to blow up the cathedral if their demands are not met?

How to Find Your Best Small Business …
Ethereum (ETH) Price Analysis: ETH is…
Long Island Sounds August 2019
REMAINER RANT – Together we are Stron…
I’m ashamed I have depression. Then I…
That is the problem that The Euros face in this, the first book of the series about them.
The Euros is the name for the Euro Protection Bureau, the highly skilled, well trained super cops unit formed to protect the European Union from threats to its integrity.
With five headquarters – the Puzzle House in London, the Grooming House in Paris, the Toy House in Berlin, the Garage in Rome and the Story House in Prague - the PuzzleMaker and Headmaster, directors of the London and Paris HQs, have a limited time to find a way to make themselves invisible so that they may enter the cathedral, rescue the hostages, save the cathedral, and capture the Bad Guys.
As little children are marched to Point Zero in front of the cathedral, with flickering lights on their explosive vests, and the Headmaster is forced to go into the cathedral as a hostage, the PuzzleMaker turns to Knuckles, the leader of the Onsite Prediction Unit, to cast her knucklebones and help him anticipate the actions of the Bad Guys.
He also asks a young gypsy girl to help him, and the Gypsy takes him on a hair-raising trip through the catacombs and sewers of Paris.
Today, we read that the famous cathedral might be targeted by terrorists:
“A suspected militant may have been conducting a dry run for a planned terror attack when he left his car packed with gas cylinders near Notre Dame Cathedral in Paris, French authorities said Wednesday.
The vehicle’s owner, who’s on an intelligence watch list of suspected religious fanatics, has been taken into custody and a possible associate has also been detained.
“We think he may have been trying to carry out a test run,” a Paris police official said Wednesday, referring to the car’s owner. Anti-terror prosecutors have launched a probe.
Eagle-eyed police officers spotted the Peugeot 607 with its hazard lights flashing and no license plate just steps from the famous church on Saturday night, according to news reports.”
Read the rest of the article here.

For more information on my thriller, The Euros, check my Amazon author site at https://www.amazon.com/author/glennashton

Let’s hope that the cathedral is protected, and no damage is ever done to it. As an 850-year old building, it represents the magnificent history of France.