Fan- The Trailer.
Is it a gripping trailer? No, It isn.. Is it a fast paced, action packed trailer? Yes, It is. 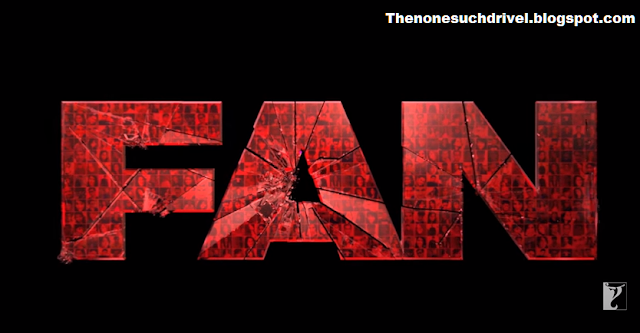 The trailer opens up showing the cliched Connaught place of Delhi with the backdrop of Gaurav Khanna dilli accented voice adoring his star and ends with what happens when obsession is not met with approbation.

Purported to be a unplayed role by SRK yet the role or roles are strongly reminiscent of  Darr and Chak de/Goody Boy Raj/Rahul characters played by SRK in gazillions of movies. But SRK has tried very hard to tone down the goody goody boy body language and  it is successful to an extent whereas the problem for me with the Gaurav Khanna character is the frozen face. Having said that, the Junoon in Gaurav's eyes comes out very clearly whenever there is a close shots of SRK and there are many in the trailer.
The trailer then tapers off to the run of the mill Bw movie towards the end with bike chase, world record breaking long jumps over the roof.

The ending.. There is no Aryan without Gaurav is so telling and reflection of the fan power. quite an impactful line but the trailer did not  bring out the impact and I am hoping the movie will.
Bottom line.. trailer had the action to keep the action lovers happy and the characteristic  witty/punchline to keep the other group happy.

This is a pucca commercial movie- good for a timepass
Trailer Link  Below:

Things You Should Stop Worrying About…
Top 10 Sites to watch Telugu Movies O…
Crunchyroll – How to Watch Anime Onli…
The Punisher: A Timeless Character