Walter and the Resurrection of G

Walter and the Resurrection of G.

By: T. J Armstrong.
This Book has 492 pages.
I recommend this book to anyone 14+.
I really like the style that this book was written in.
The book had a ton of detail. All of the detail allowed you to visualize everything going on.

A Funeral Like No Other
Review: The Witch Doesn't Burn in Thi…
Today’s Daily Horoscope for each Zodi…
Deutsche Liga boomt: Umsatz-Rekord mi…
Pearl Harbor survivor and USS Arizona…
I really like how the detail was spread out. There was always enough detail that it made you keep on reading and kept you on the edge of your seat.
I also realized that there was a bit of foreshadowing. Even though it wasn't stated exactly, you could assume some of the events that will take place.
I've learned not to judge a book by it's cover!
If I saw this book at a bookstore or library, chances are, I would't pick it up.
Why? Well, medieval settings aren't my cup of tea. 1/2 through the book,  I realized that I couldn't put the book down!
I really did enjoy reading it!
So for all the people thinking that they might not like it, I recommend this book to you!
It's honestly worth the read!
I give this book a 5 out of 5! 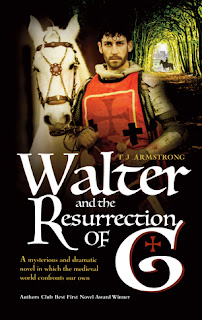 First of all the book has two parts. The first part takes place in medieval time. The second part takes place in modern day.
In the first part, the book starts off with Walter being born. We get to follow him all through his life. We get to see all of his accomplishments and failures. At times it can be too much, especially since the reader forms a connection with Walter. In a way the reader knows who Walter is and what he really wants, and we can infer how the decisions he makes will impact him later on in life.
Walter is the son of a Cartwright. From a young age he shows his ambitions.
He is a smart young man and also a good singer.
Little does he know that those ambitions of his might cause trouble for him when he's older.
In the second part, G is a professor at Oxford.
He has all of Walter's songs, poems and writings.
The main problem is that Professor G dies.
He has written that now it is Ian's and Lillian's responsibility to publish all of those writings.
I absolutely loved the combination of the olden days and modern day.
Hope you enjoy the book as much as I did!

Review: The Witch Doesn't Burn in This One by Amanda Lovelace

What does your child’s cough really tell you?

Marvel’s Deadpool 3: Release Date And Everything To Know About Phase 5 Movie

Walter and the Resurrection of G