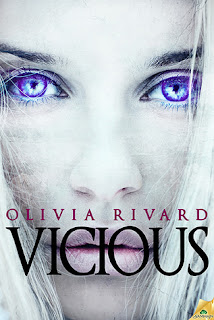 Title: Vicious
Author: Olivia Rivard
From: Netgalley
Genre: Paranormal, Urban Fantasy
Release Date: 18th March 2014
Challenges: 2016 Netgalley & Edelweiss Challenge, 2016 Blogger Shame, Summer COYER 2016
Links: Goodreads - Amazon
Synopsis (from Goodreads): Built for death…altered by love. When the world convulsed under the burden of overpopulation, hardly anyone noticed a few girls going missing. Turned against her will into something out of a horror movie, Anna was one of those girls. But she learns to control the hungry monster she has become, and she gets out.
After orchestrating the escape from the secret lab, Anna leads a faction of freed Vampires and searches for a peaceful balance between human society and her new family. Then she meets Grant. Grant walks into Anna’s world unafraid, looking for adventure, on a quest for something to believe in, something to fight for. But love is a complication Anna can’t afford. Not when she’s in a power struggle with a rival group of vampires and another laboratory in another prison has been discovered. Except Grant won’t be pushed away easily.  Anna needs all the vampires to work together to take down the laboratory, and the leader of the rival faction has shown a deadly interest in Grant. Product Warnings: Contains a reluctant vampire and a hero who doesn’t hesitate to step into the danger zone to be with her.
I'm going to start by saying how perfect I think the cover is. I'm not sure I've seen one that quite hits the naul on the head so much with the character description. The woman on the cover is basically exactly how Anna is described, even down to the eyes, and I like that it reflects the character.

Simple Tips To Increase Self-Esteem
Entire Butterfly Farm Stock Devoured …
Wesley Snipes Congratulates Mahershal…
Long Island Sounds July 2019
What’s New On Hulu July 2019
I really struggled at times with Vicious, there were definitely things I liked (which I'll get to in a minute) but they were slightly overwhelmed by the things I didn't. There seemed to be a lot of time spent repeating events from the previous chapters in summary form, and it just kind of felt a bit stunted. I also didn't buy into a lot of the emotions that the characters were feeling and it felt really difficult to get attached to them all. The things that time was spent on didn't seem to be the things that should have been. More time spent on Grant and Anna's relationship (rather than it just happening) and more time spent on the action and the planning, would have greatly improved this read for me.
So the things that I did like...the Vampire lore that Rivard used was fantastic. I loved the originality and the thought that she put into it. At the beginning of the book there was a lot of mystery surrounding it, and even by the end some weren't solved. But vampires are done so much that it's great having a different take on them.
The other thing that I really liked was the reverse trope. Normally its the man that is the vampire and the woman that is the innocent human bystander in vampire romances. However this time it was the other way around, and it was interesting to see the dynamic.
While I felt there were things that could have been better in this book, I also kept reading to the very end.