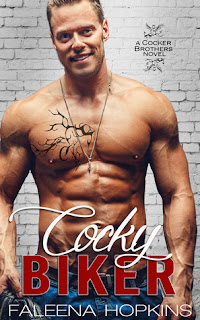 Title: Cocky Biker
Series: The Cocker Brothers of Atlanta (#2)
Author: Faleena Hopkins
From: Review Copy
Genre: Romance
Release Date: 20th July 2016
Challenges: 2016 New Release Challenge, Summer COYER 2016
Links: Goodreads - Amazon
Synopsis (from Goodreads):My father is Congressman Michael Cocker. He f*cking hates that I live outside the law.  I'm Jett. I don't care that I come from old money. The Ciphers MC - They're my chosen family. We are servants ONLY to our code, our mission. We live it. Breathe it. Search for it. The same force that drives storms, tornadoes and hurricanes, propels us. Like them we arrive without warning and level sh*t, to erect something superior. A loner, I never expected on the most dangerous of our missions to meet an irresistible feral cat. I nicknamed the kitty, Sunshine, and she is anything but. My name is Luna, not Sunshine. I am darkness. Only one thing matters to me...killing the man who murdered my mother when I was ten. I don't have time for Grey Eyes - a f*cking biker named Jett Cocker. No matter how ridiculously hot he is, or how skilled at playing my emotions like a violin. My WHOLE LIFE I've been gearing up for this. I've finally found the murderer. Now. Is. My. Moment. So why am I wasting time with Grey Eyes in this motel room...why is he making me forget my pain? The Cocker Brothers of Atlanta, Georgia, have earned their nickname -- The Cocky Brothers. Their daddy taught them to be real men. Their momma told them, "Hold out for a different kind of woman." They have one thing in common:  ARROGANCE.

Cocky Biker gives you everything that you expect from a Biker Romance and then a bit more. There's suspense, romance, sex and general bada**ness, from the hero and heroine. The characters are gritty and real and there's some moments where the right thing to do is a little bit wrong in the eyes of the world.

Luna is definitely a product of her upbringing. But while on the outside she is tough and determined, her inner thoughts leave no doubt that inside she really just wants to be loved. But the best bit is that she doesn't actually change who she is for someone else. She is definitely her own person and won't let anyone change her. Not that that always works in her favour and she was definitely the one holding back the relationship.

While Jett didn't have as bad a family situation as Luna had had, he had his own issues to deal with and I liked that Hopkins spent the time dealing with his family issues as well as Luna's. Family was clearly important to both of them (which made the ending just perfect!) and for them each to get the same amount of weight in the book worked well for me.

There was definite tension between them, and I liked that though the lines between attraction and affection were hazy from early on, initially they just acted on the attraction. There was something a bit more realistic about that. Their relationship took work, but they did work well together.

This was a good read, I'm looking forward to more in the series!