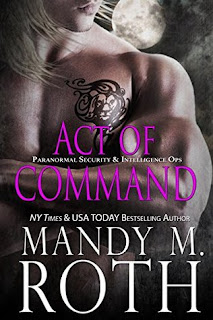 Fine arts student Mae is stood up by her blind date Corbin and ends up kidnapped and held captive by the Corporation. Corbin was called away last minute and left a message for Mae but that doesn't stop the guilt eating away at him, particularly as he felt a strange pull towards another woman on the day of their date. But when he discovers that the woman he felt the pull towards was none other than the woman he stood up, Corbin knows that there is something more at play...

I really enjoyed being back in the PSI Ops world! There are several interconnecting series and with each book they seem to be becoming more and more entwined (meaning that old characters crop up in them, and it's always good to see how they're doing.

Mae and Corbin were interesting as fated mates. Mae sculpted Corbin before she'd ever met him and they both had the awareness of each other when they first saw one another. But then time passed because of Corbin's mission and Mae's imprisonment, which meant that when they met properly for the first time they were far less against the whole fated mates thing than other characters in the series have been.

It was really good to see a different side of Striker in this book, and I'm guessing that his will be the next book. Up until now he's been an over the top Scotsman (nothing against the Scottish!) but he definitely mellowed out a bit in Act of Command and he seemed to have a non-romantic soft spot for Mae. There was also the introduction of what I'm guessing is another future couple (though maybe from a different series).

I like the focus on friendship in the book too. Not only is there a strong bond between the various team members of PSI, but Mae also had two key friendships; Brad and Alice. Alice was her best friend since before the book started, and Brad was someone in captivity with her who befriended her. It was good to see that in a book.

I enjoyed Act of Command, I can't wait for more!