Molly is a Pretty Cockroach 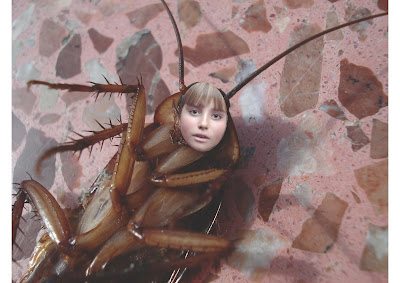 Franz Kafka’s story “The Metamorphosis” begins like this “As Gregor Samsa awoke one morning from uneasy dreams he found himself transformed in his bed into a gigantic insect. He was lying on his hard, as it were armor-plated, back and when he lifted his head a little he could see his dome like brown belly divided into stiff arched segments”.
He surely was talking about the metamorphosis of the main character into a cockroach. One fine morning - the author does not admit it to be fine for obvious reasons - the main character Gregor Samsa was metamorphosed into a cockroach. The universally accepted definition of metamorphosis is “the process of transformation from an immature form to an adult form in two or more distinct stagesin an insect or amphibian)”. The author seems to be of opinion that Gregor Samsa was immaturewho by metamorphosis is transformed into a cockroach, which is an ‘adult form’ of ‘human form’. Well, there is no need to feel offended.

Look at this single cell lowest creature in the animal kingdom called Amoeba. It performs all the functions of eating, walking, sleeping and reproducing by his single cell body. His all acts are precisely balanced. He would develop limbs (Pseudopodia) depending on the distance it wants to walk. He would reproduce when his security is in danger. The process is amazingly simple and unemotional. Obviously, he has a thinking mind. Human beings are a complex structure of 37.2 trillion cells to perform all these functions. To complicate it further, he has a mind filled with ego, emotions and logic.
Critics search for metaphors, simile, satire and symbols even in simple prose written with honest intentions. Therefore, they presume that human life is reduced to an insect for the people living in ghettos. Let us not forget that Kafka was a Jew and was brought up by a father who was a strict disciplinarian. How low somebody can make you feel? A worm? An insect? While T. S. Eliot in “Love Song of J. Alfred Prufrock” says
“And when I am formulated, sprawling on a pin, When I am pinned and wriggling on the wall”he feels like a worm. There is a lot of difference in feeling like a and feeling like an insect.
Our cockroach is converted into a beautiful teenage girl, with all her habits of her original form. Let us call her Molly(psychedelic experience). As a cockroach she lived in a deserted house because it was safe for inhabitation. She knew human beings despised them a lot and are always well prepared to kill them on first sight. She felt safe and healthy to live in this deserted apartment. Nobody bothered her here and she could live a solitary life wandering in the whole big apartment.
The female cockroach Molly use to live in a nearby junk house. She was a member of a big community there. The Relationship was not important. Nobody cared for blood relations. Any grown up could mate with anyone. She was teenage considering her life span to be 1.5 years. “Calling position”(to invite males to copulate) came very naturally to her and her instincts taught her to spread her wings and expose her membranes and expand genital chambers to ooze pheromone. She was surrounded by male cockroaches flapping their wings. It was a dark night and she could not really know who deposited sperms on her back. Though it doesn’t matter much also.
After depositing her ‘egg case’ “Ootheca” safely under warm and damp gutter line of junk store, she had abandoned the junk store, in search of new land. Luckily, the deserted apartment was at a walking distance, for she was always afraid of short flights, which made her conspicuous and vulnerable. She spent a few nights with the feeling
“I am Monarch of all I survey; My right there is none to dispute” (William Cowper: The Solitude of Alexander Selkirk).
Molly had a small stomach. The owner of the apartment must have left in a hurry, for there was enough food left all over flat. Molly did not like the food in the kitchen where it was readily available. She preferred to hunt for it from dining table, , and sinks.
Molly did not bother to clean the apartment. She slept in soiled bed and walked on dusted floor.
Once out of curiosity, she opened the window. A blow of fresh air hit her nostrils. She squeezed her nose, as she was accustomed to stink aromas only. In the window of the opposite flat, a handsome man was staring at her.
She hurriedly closed the window. She was about to move when she saw at the sill another cockroach staring at her with blank eyes. He introduced himself in their cockroach slang. "Hey, I am Gregor Samsa; what are you doing in my flat?”
Read more articles here
©  Vipin Behari Goyal