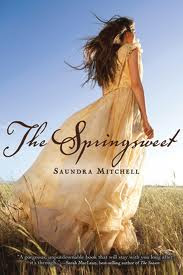 The Springsweet is a YA historical paranormal novel, and a companion to The Vespertine, by Saundra Mitchell.

I warned you yesterday that my reviews were going to be sequels for a few days! If you haven’t read The Vespertine, you definitely want to avoid this review and seek it out after you’re done. Don’t ruin your experience!!! Instead, read my review of The Vespertine here.

Last chance to turn away…

Zora Stewart hasn’t been the same since her sixteenth summer. She’s haunted by her fiancés death and the amount of other losses in those few short months. She’s a shell of her former self, and her parents are worried.

After an attempt to reorient Zora to Baltimore society goes scandalously wrong, it’s decided that she’ll join her widowed aunt in Oklahoma Territory in the hopes of some good old-fashioned hard work waking her back up to life.

It doesn’t take long for Zora to see that the exciting, thrill-ride of an adventure the papers make the West out to seem is a far cry from the truth. It’s a dusty, heartbreaking, backbreaking area to live – and it seems to stir something inside of Zora that she’s never experienced. She begins to sense the water beneath the ground – as though she’s getting a power of her own after watching her cousin Amelia use her own strange abilities to predict and prophesize.

But she saw the dangers that came of Amelia’s power – and though she allows her struggling aunt to hire her out as a “springsweet” to help people find the water they so desperately need in this merciless land, deep down she knows it may all come tumbling down on her.

Yet amidst all of this, Zora is shocked to find herself drawn to a wholly unsuitable, rough-mannered young man named Emerson Birch in a way she thought she’d never be again after her beloved Thomas’ death. Her aunt prefers Zora to focus on Theo, the surprising visitor from her hometown, who has come to court her. Nevertheless, the more Zora learns about Emerson the more she’s attracted…

For the first time, Zora wonders if she can do more than survive life… Maybe she could begin to live life.

The Vespertine, for me, was an incredibly hypnotic, dark story that pulled me into its expressive splendor. Getting the chance to revisit Zora, who has a big character in that, was wonderful.

The Springsweet started a little slow, but there’s a vibe of enigma that held me and a fiery attraction that pulls Zora unwillingly out of her mourning and into a realization of her own powers. Unlike The Vespertine, which even in its leisurelier, earlier moments would switch to a future moment that provided such an disquieting sensation that you would be pulled back into its gothic hold, The Springsweet takes it’s time to really develop a plot – but I was patient, as I knew that it wasn’t until the end of The Vespertine that I was fully won over.

I was, and am, taken with Saundra Mitchell’s way of introducing these elemental-like powers tied to fire, air, earth, and water. She makes it gritty and frightening how it can affect the world around them and cause a moment of utter devastation. The Springsweet may have been gradual to show how that was true for Zora, but once it did that ominous tone really kicked in. With that and both the passion of her burgeoning romance and the wild beauty of their magic becoming more vivid, I became more mesmerized.

In my opinion, The Springsweet takes a bit more patience – I’d say to hang in there to about the middle – but it is definitely a worthy, if perhaps a little less gothic and dark as, The Vespertine.

I’ll be looking for more from Saundra Mitchell!