Rich states — not poor ones — have the largest Homeless populations. Why? It’s all about housing costs.

Think about the recession. While it stoked unemployment and devastated family budgets, it really began with the collapse of the housing market, which drove prices down to a level that made basic shelter more affordable for all.

You can’t beat Homelessness with economic growth. In fact, you can actually make things worse, boosting housing prices in a way that heightens problems for the most desperate families.

But there’s a second takeaway: Policy matters. Massachusetts is one of those rich states with high housing costs and an outsize homeless population. But the number of “unsheltered” homeless — people stuck on the street — is extremely low, among the very lowest in the country. And one big reason is that Massachusetts guarantees homeless families a “right to shelter.”

Rich states have more homeless people. It’s not an iron-clad rule, just a loose tendency, but it cuts sharply against the grain of economic expectation. 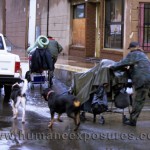 The District of Columbia is the tragic leader on this score, with a rate of homelessness six times the national average and the highest per capita incomes in the nation. Close behind are other relatively wealthy redoubts: Hawaii (53 homeless/10k), New York (45), Oregon (33), and Massachusetts (31). Meanwhile, the states with the smallest homeless populations are Mississippi (7) and Alabama (8), two of the poorest places in the country.

Even if you take a simpler measure — just comparing the poverty rates across all 50 states — there doesn’t seem to be any connection between the number of poor people and the number of homeless people. And if you’re still skeptical, remember that the national figures provide a kind of corroboration. Poverty rates leapt during the great recession, homelessness didn’t.

The one thing that really does seem connected to homelessness rates is the cost of housing.

Look back at the list of places with the highest homeless populations: D.C., New York, Hawaii, Oregon, Massachusetts. Those are five of the hottest housing markets in the country (and California, slightly down the list, is another high-priced, high-homelessness state). And at the bottom, Mississippi and Alabama are cheap places to live.

If this connection between homelessness and housing costs seems obvious, think for a second how strange it is that poverty isn’t part of this equation. After all, there’s no “absolute” sense in which costs are high; they can only be high relative to how much money people have. So why isn’t homelessness equally about out-of-reach costs and limited means?

What’s needed is a story of homelessness that involves housing costs, but not income. And there, the academic research provides some assistance.

You can think of homelessness as being caused by a confluence of three things:

1. a sudden life shock, like a health crisis or unexpected unemployment

2. a breakdown in social support, with too few friends and relatives willing to lend their couches or share their homes

3. a lack of alternative housing at the bottom end of the rental market

Put these together and you can start to see why homelessness and poverty might not be so strongly connected.

Imagine a middle-class family in a rich state. They’re doing fine until the breadwinner is hit by a health or career crises. Bills begin to mount, and they quickly find they can’t afford to pay their rent or cover their debts.

So they reach out for support, sleeping on friends’ couches or in spare bedrooms. But eventually this dries up. If there’s no affordable housing, they may end up in a shelter.

In this account, your place in the income ladder is secondary. For poor and middle-class people alike, a serious life shock can break your financial life and lead to temporary homelessness.

This is just a theory, which you may well find unconvincing. Even so, you can’t wave away the puzzle that lies behind it. Homelessness seems to be driven by factors other than poverty.

Rich states have one big advantage: more resources. Wealthier states may have higher housing costs and larger homeless populations, but they also have more resources to combat the problem. And that really can make a difference.

Massachusetts is a prime example. When the Department of Housing and Urban Development did its most recent count, back in January, it found that there were 31 homeless people for every 10,000 residents. But 30 of those 31 were sheltered. Even with all the shortcomings and indignities that come with living in a homeless shelter, that’s an incredible achievement.

Now, to be fair, January weather certainly played a role. In general, colder states have higher shelter rates than warmer states; only about a third of California’s homeless population was sheltered on that same January night.

Still, few states can match Massachusetts’ ability to provide shelter for the homeless. And one reason is that Massachusetts guarantees shelter access for families (though not for individuals). There are restrictions and hurdles that make this guarantee less than universal, but it has nonetheless helped Massachusetts become a leader when it comes to keeping people off the streets.

What’s more, the state continues to explore new ways to help the most desperate. An innovative public-private partnership has raised money to move more people into permanent housing. And in recognition of the role poor mental and physical health can play in chronic homelessness, the state is trying to use federally backed Medicaid dollars to advance this effort.

There’s a bright side to this story. If homelessness and poverty aren’t strongly connected, then you don’t have to solve poverty in order to solve homelessness.

Instead, you can take a more direct path: providing shelter for those who need a temporary safety net and permanent housing for those who lack the health or capacity to right themselves.

Done right, this approach needn’t be that expensive, because we’re not talking about large numbers of people.

A relatively small infusion of new money might suffice to provide homeless individuals with the same guaranteed shelter access we already offer families.

And to battle chronic homelessness, research increasingly shows that the best solution is simply to provide permanent housing. That may sound like a costly proposition, but we’re actually talking about a pretty small population: several thousand chronically homeless individuals in Massachusetts, a few hundred of whom consistently lack shelter.

With needs at this scale, you can make real progress with pilot programs and public-private partnerships — the kinds of efforts Massachusetts is already pursuing.

And unlike so many government programs, which struggle for resources when the economy goes sour, these programs should be more predictable. After all, homelessness doesn’t seem to be shaped by economic cycles.