Colonel Natansky, Commander of the 117th Air Wing of the Israeli Air Force stood beside the large map at the front of the briefing room. “Men, the pot is stirred,” he began. “With Dagger Flight sending two Turkish aircraft to the bottom of the sea we’re seeing action around all our borders. This is just what we thought might happen, but it’s surprising to see it develop so quickly. In fact, that Turkey would sortie its fighters against an unarmed, diplomatic jet caught us off guard.”
“Do the intel-spooks have a guess as to why Turkey attacked?” Rueben Cohen asked.
“They have no idea, at least not one they are willing to share. My guess is there’s a mole, but as I have no evidence, you did not hear me say it. However, we have a more immediate concern.” The colonel turned and highlighted the city of Amman Jordan. “This is the latest intelligence twist. The lead elements of the Iranian army have turned southward, and are headed straight for Jordan.”
“Sir, I thought Jordan was keeping its distance from this so-called coalition,” Moshe stated. “What changed?”
“The Ayatollah-in-Chief, that’s what changed,” answered the colonel. “He has decided that any Islamic government that doesn’t fully support Iran is nothing more than dung. Kazimi is backing those words by re-routing his forward divisions toward Amman. Much of their Russian-made air force began arriving last night. There’s no way Jordan can stand up to one hundred thousand fully mechanized troops. So, they’re bowing to the Ayatollah’s jihad.”
“That’s not all. Egypt is also stuck in a vice, although they seem to be resisting at present. Their problem is coming from the radical jihadists within the lower echelons of the government. Evidently, extremists began rioting in the streets right after the Ayatollah’s fatwah and things are becoming politically unstable in Cairo. We don’t believe it will be long before the Egyptian army stages a coup. They will displace the moderate regime and establish a purely Islamic State, and I’m talking radical in every way. With one little edict, a whole new list of enemies has been presented to us. Rather, a list of old enemies has resurfaced with a vengeance.” The colonel’s eyes were beginning to broadcast the danger his men would soon be facing.
“What are we going to do about it, Colonel?” Rueben actually stood to his feet in a combination of anger and enthusiasm.
“Just cool your jets for a minute, Lieutenant. I’m not quite done with the bad news.”
A series of slides were projected onto the screen revealing the Jordanian Royal Air Force base just outside of Amman. The pictures were taken at night, probably by a Mos’sad agent placed near the end of a runway. Every snapshot included two fighter jets on a glide slope for landing, sixty-six in all. The planes were a combination of MiG 21s, 27s, and 29s. The colonel finally spoke. “This is our fly-in-the-ointment, gentlemen. Not only that, but the Saudis have taken a war footing as well. Their fighter aircraft are being made fully combat ready with more urgency than we’ve ever seen in the Arabs.”
The room went silent. The implications of what they were witnessing carried an enormity beyond anything these sixteen pilots had experienced. Not since the 1973 Yom Kippur war had such a malevolent threat arrayed itself against Israel.
Moshe shook his head and grunted. He knew what was coming. Everything about it had already been written. Still, seeing it take shape at this unbelievable pace gave him a surreal sensation.
The slide changed to a situation map of Lebanon and northeastern Syria. A large Libyan armada was ready to port in Tyre with a huge tonnage of armaments. The Port of Tartus in Syria appeared to be a massive parking lot for Russian and Turkish naval vessels. The Russian-led coalition was rapidly taking shape.
“Colonel,” Moshe asked, “Are the Russians responding to Iran’s change of plans? Do we see any activity that would indicate that coalition members are having a spat?”
Natansky’s eyebrows crinkled as if he wondered how Moshe could have come to that particular conclusion. “Not that I’m aware of. That would be a welcomed twist if it were true. You must understand that what we’re seeing just came down the line of communication. I would imagine the Russians are just as surprised as you.”
Moshe could sense a deeper emotion coming through the colonel’s voice, but remained quiet long enough to take a couple of slow breaths before he spoke. “Okay, Colonel. May I be so bold as to say ‘Out with it?’ We’re all big boys here. What’s really going on?”
Natansky shrugged in resignation. “As of noon on the day after tomorrow, all leaves are cancelled. The base will go into lockdown until further notice, and alert duty status will commence for all personnel. I’m sorry men. Except for those who are on duty today, you all need to go home and say goodbye to your wives and families.” Natansky held up his hand just as the pilots were beginning to stir. “It gets worse. Only base personnel will be allowed to remain at Ramat David, so those of you whose families are housed here need to get them moved to an alternate location.”
Moshe was stunned. He and Tasha had been unable to occupy their Haifa apartment because of the blast. Now, she was being displaced again. “How long will this lockdown last, Colonel?” he asked.
“Until further notice, but I suspect it will be this way until we deal directly with these threats.”
“Meaning?”
“Meaning the Iranian air force is about to become target number one. I wouldn’t be surprised if something is in the works for Egypt, the Saudis, and our other jihadist friends as well.”
As dread filled the pit of his stomach, Moshe glanced at his wingman and saw a wide grin. 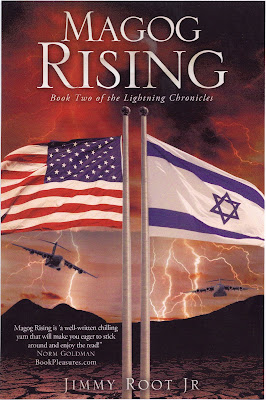 $15 per Copy...SIGNED!
Buy several for the same shipping rate as ONE! Give them as gifts.
OR
Send a check to Jimmy Root Jr PO Box 112, Smithville, MO 64089
(add $5.00 for shipping)
MAGOG RISING
is the READERS FAVORITE 2010 National Writing Competition SILVER MEDALIST in the Christian Fiction Genre
ORDER NOW
Visit:
http://www.lightningchronicles.com/
Toll Free at 1866 909-2665
Or use the above address to send a check for $18.00 (includes shipping) and ask for Magog Rising...or get both books....SIGNED!
Distant Thunder, Gog and Magog, Israel, Iran, Radical Islam, Ezekiel 38 and 39, Jimmy Root Jr, Rapture, Nuclear Weapons, Bible Prophecy, Russia, European Union, Lightning Chronicles, Terrorism, Ahmadinijad,