I've been reading Julie E. Czerneda's novels for years and just finished The Gate To Futures Past (Reunification #2). 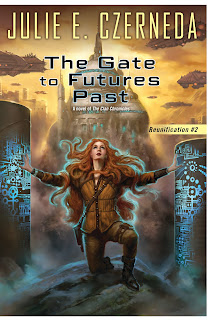 It is a sequel to This Gulf of Time and Stars (Reunification #1).

The Reunification novels are part of The Clan Chronicles.

Julie E. Czerneda is one of the few writers like Charles E. Gannon, the absolutely-must-read writers.

Julie has blended good science (physics and genetics) with imaginary science with theories of souls and the spiritual significance of Time, and added in a whopping dollop of amazing Romance that fuels the blistering hot plot.

Without the Romance, there would be no story here! That is the very definition of Romance Genre.

So I was delighted to get this Guest Post from Julie on the occasion of a new novel in The Clan Chronicles -- a series that explores the farthest reaches of alien and human biology, genetics, romance, and the structure of the universe, the nature of Reality, and what is important (and what is not).

Most writers would flub this blend, putting too much of one or the other, getting too abstract, inserting indigestible lumps of exposition about nothing relevant, or just cutting to the sex scene and forgetting the oddities of the carefully built logic of the world surrounding the characters.

The Clan Chronicles are a must-read for Science Fiction Paranormal Romance writers trying to blend genres.

Since 1997, Canadian author/former biologist Julie E. Czerneda has shared her boundless curiosity about living things through her science fiction, published by DAW Books, NY. Recently, she began her first fantasy series: Night’s Edge with A Turn of Light, winner of the 2014 Aurora Award for Best English Novel. A Play of Shadow followed, winning the 2015 Aurora. While there’ll be more fantasy, Julie’s back in science fiction to complete her Clan Chronicles series. Reunification #1: This Gulf of Time and Stars, came out in 2015. #2: The Gate to Futures Past will be released this September. Volume #3: To Guard Against the Dark, follows October 2017. An award-winning editor as well, Julie’s latest project is editing the 2017 Nebula Awards Showcase, a singular honour. Meet Julie at Acadia’s Dark Sky Festival, Bar Harbor, Maine this September and at Hal-Con, Halifax, this November. For more, please visit http://www.czerneda.com.

About the Clan Chronicles Series:

The Clan Chronicles is set in a far future where a mutual Trade Pact encourages peaceful commerce among a multitude of alien and Human worlds. The alien Clan, humanoid in appearance, have been living in secrecy and wealth on Human worlds, relying on their innate ability to move through the M’hir and bypass normal space. The Clan bred to increase that power, only to learn its terrible price: females who can’t help but kill prospective mates. Sira di Sarc is the first female of her kind facing that reality. With the help of a Human starship captain, Jason Morgan, himself a talented telepath, Sira must find a morally acceptable solution before it’s too late. But with the Clan exposed, her time is running out. The Stratification trilogy follows Sira’s ancestor, Aryl Sarc, and shows how their power first came to be as well as how the Clan came to live in the Trade Pact. The Trade Pact trilogy is the story of Sira and Morgan, and the trouble facing the Clan. Reunification will conclude the series and answer, at last, #whoaretheclan.

And what will be the fate of all.
GIVEAWAY
2 sets of 2 books. 1 mass market of A GULF OF TIME AND STARS and 1 hardcover of GATE TO FUTURES PAST. US/Canada only.
RAFFLECOPTER FOR TOUR WIDE GIVEAWAY:
a Rafflecopter giveaway

To Smell Me Is To Love Me
If you’re built that way. The means by which living things communicate has been my passion since I knew what a biologist was—and, wow, what a great thing to be. Living things communicate regularly for all manner of important reasons: don’t eat me, hold still while I eat you, learn or be eaten/or starve, that way lies death/this way less death, status/age/and oh, yes.

Reproduction. That’s a handy one for biologists to study, in part because unlike Humans, most species have a specific time when they are in the mood, being not-so-much for the remainder. Sex as a time-limited activity, usually tied to a season. Sex as the end of life, so it happens only once. There are wonderful variations on these themes, but generally speaking? You’re all in, or not interested.

Please don’t misunderstand me. Affection, even love, for those living things who enjoy it, isn’t the same as sex drive to a biologist. For us, sex is about results.

The Clan Chronicles, which started with A Thousand Words for Stranger, is at heart about sex and results. I deliberately created the Clan, the aliens we meet in the books, as having no capacity for love or affection. Their reproduction neither requires nor rewards it. Males compete with females to create a pairing able to produce offspring. Lose?
The male dies. The female? Waits—literally, in a physiological sense, her body immature--for the next contestant for her Choice.

Simple and not that far from spider sex.

The Clan have reached a point where they are losing males faster than they can be born. In other words, extinction looms. One individual, an unChosen female named Sira, has waited long enough. She’s determined to find a solution and save her kind.

How being the tough part. Oh, there are “other” humanoids within this multi-species Trade Pact. Not to breed with—biologist remember, so inter-species fecundity is right out for me--but what if one, say a Human, could successfully compete and pair with a Clan female, in order to invoke the reproductive maturation of her body? Sira, despite Clan loathing for the non-Clan, decides to try.

So far, I’ve a textbook mental experiment in reproductive behaviour, breeding for extreme/risky characteristics, and a cool alien species about to crash. A problem, but not yet a story.

There is another side to me, of course. The romantic. The dreamer. I love stories of space travel, of daring starship captains and crew, of the whole messy business of getting along when your biology doesn’t.

The driving force of the story of the Clan Chronicles may be their predicament, and Sira’s involvement of Captain Jason Morgan, a Human telepath. The heart of the story—its warmth and passion—arrives when Sira learns what her kind has forgotten.
How to love.

A lock of red-gold rose from the mass tumbling down Sira’s back, curling towards him like a languid finger. Warm and sensual, that hair, strangely willful, and the mark of a fully mature Clanswoman. She’d become that by being near him. By being attracted.

As had he. For he wasn’t, Morgan thought, the simple trader he seemed either.

When he’d met Sira he’d been a telepath of respectable skill, for a Human, with enough potential to make him uncomfortable around the noisy minds of others and wary of the Clan, who disapproved of such power in others. Since?

Almost. Instead, he and Sira had managed the formerly inconceivable. Not only had her body matured into its natural—and glorious—adult state before Choice could take place, but their minds and hearts had forged the permanent Clan pair-bond called a Joining.

While he remained wary of the rest of her kind, even the most xenophobic of Clan couldn’t argue with that.

Not that he cared. What mattered? He was no longer alone, no longer empty and courseless. The clear brilliant sanity of Sira’s thoughts, her passion and goodness, filled him. Each shipday he woke to the joy of discovering the universe with her. And when they made love—

Her head half turned, hair lifting to reveal the sweet curve of her jaw, the blue of the airtag adhered to her skin, and, yes, a coy dimple. We could leave, you know.
He came close to tripping over his own feet. Witchling.

You started it. With distracting warmth.

Oh, the hair? Sira—all Chosen female Clan—have opinionated hair. I did that because it gave me an instant reality check. She isn’t Human and never will be. Also, it’s a wonderfully sensual seduction device. Read the books.*

So the Clan Chronicles is a love story between aliens. It’s a science fiction examination of a biological question. It’s a lark and an epic, with dark places and some truly hilarious moments. It’s all those things at once, my dreams, for you to share.

*I’ll admit Sira’s glorious locks had their start in personal aggravation. I’d been trying to get a curl in my own hair and failed miserably. What better than fabulous self-curling hair? Naturally, I immediately made that hair a nuisance; it’s what authors do to their characters.

OK, you have your homework assignment -- go read The Clan Chronicles with special attention to the blend of science and romance.