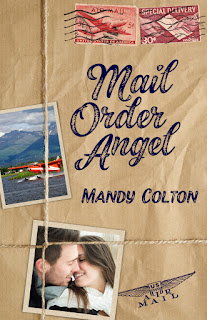 Heartbreaking loss strikes two people living happy and carefree lives in polar opposite places of the North American map. Young and adventurous, Lance Colburn left home years ago and worked his way north to Alaska, eventually settling in Nome. After building a successful business, he’s still a very content bachelor, living in a brand new home he constructed himself. Life couldn’t get much better…until the worst news a single guy could get finds him after a family member is stricken with a fatal illness. He learns that his simple—and slightly selfish—existence is about to get flipped upside down and crowded. Worst of all, he’s going to need a specific kind of help that can’t be found in Nome.

Having lived a happy and sheltered life with her parents in Boston, Massachusetts, Angel McBride is about to become an adult and spread her wings. While taking a summer vacation in Europe with her friends before starting college, tragedy strikes at home. After returning, she is shocked to find that her life has already drastically changed and is about to get worse. She needs an escape plan—and quickly.

With little time and no other choices at hand, both Lance and Angel come up with the same ridiculous idea at the same time: Marriage to a stranger.

But neither are prepared or quite mature enough to handle the big leap. Can they overcome her deception and his wily ways to find true happiness?

Lance Colburn sat across from the two attorneys with what was probably a totally forlorn expression on his face. His own lawyer, Edgar, held a fist pressed against his mouth, coughing and shifting in his chair. Lance wanted to reach over the desk and punch him. Hard. This was the worst day of his damn life. After today, nothing would ever be the same again. One minute he’s a contented bachelor and a successful business owner. The next? He’s the sole guardian of two young kids. One may not even be out of diapers. The nickname alone was enough to make him grimace. Who calls their kid Turd? Jesus H!

He sat back in his chair, staring at the floor dumbstruck. A snicker finally escaped one of the men, causing him to look up, and he didn’t have to guess whose mouth it had come from. He shot Edgar a glare. “There is not a damn thing amusing about any of this. Are you absolutely sure there is no one else she trusted to do this job? My sister never said a word about this decision to me.”

His older sister, Gail, had recently succumbed to breast cancer. She had fought a losing battle with it for years. To make matters worse, her husband, Dale, had been killed two years before in Afghanistan while serving in the military. Dale had been adopted by an older couple, also now deceased. Lance and Gail’s own parents had passed not far apart about four years prior. Shit. The sudden reality that he had no family left hit hard and saddened him. There really was no other family guardian but him to take the kids. He glanced at the uncomfortable attorney who’d traveled all the way to Alaska to relay the grim news after the man had found out over the phone how long it’d been since Lance had spoken to Gail.

The man swallowed and said, “I’m very sorry for your loss and this obvious surprise, Mr. Colburn. It certainly was never meant to be. I had papers drawn up and asked her for your information to send them for your approval and signature quite a long time ago. I even offered to call you myself on multiple occasions. I swear, on my firm’s good name, that I had no idea there was still a question of guardianship. Are you insinuating that you’re unwilling to take the children?”

What? Now Lance was pissed. “I’m not insinuating anything, damn it! But what the hell am I supposed to do with two small kids out here in this wilderness? It’s all I can do to take care of myself sometimes. I work at a frantic pace through three seasons of the year for twelve-plus hours a day. I’m a loner, I’m selfish, and I don’t know squat about kids. And what the hell kind of names are Trixie and Turd? One is a stripper name, and the other is…just wrong!”

His lawyer and friend, Ed, finally turned his head and faked a coughing fit, although it was too obvious that he was laughing. The fucker.

His sister’s lawyer, who possessed much more tact and was taking the situation as serious as it certainly was, spoke calmly. “The boy’s name is actually Turek.”

Lance just sat blinking at the man for a minute and then threw up his hands. He said sarcastically, “Oh, what a relief. That name changes everything. Now I just have to worry about him getting smacked around a little on the school playground but not so much his head mashed into a big steaming pile of moose shit!”

Edgar, the asshole, snorted. “The name isn’t an issue, Lance. Sounds kind of like an Inuit name to me. Don’t you think you’re overreacting a bit here?”

“Fuck you, Ed. Some friend you are. How can you sit there and laugh? My sister just died, damn it!”

“I’m not amused by your sister’s passing, and you know that. I just… You’re my friend, and I know you. The picture of two little ones dropped at your doorstep, and you, the quintessential bachelor, suddenly in the role of father, is what I find amusing. It’s your damn squirmin’ that’s funny, but I know you, and you’ll figure this out and do the right thing by them and your sister.” Ed was wearing a gentler smile now.

Lance looked at the two men. “There’s no one here to help me care for them. There’s no daycare and one grade school. What the hell am I supposed to do?”

While trying to keep a straight face, Ed said, “Maybe get a wife? Raymond Mullett got himself a mail-order bride. Worked out pretty well for him. I drew up the papers myself.”

Lance stood and scoffed. “When you two get serious and come up with a suitable idea for everyone involved, call me. I am not able or in any position to care for two kids.”

His sister’s lawyer said, “A friend of your sister’s has agreed to keep the children for a month. After that, they will have to go into the child-welfare system for foster care and adoption if you don’t agree to take them. They could then be split up for life, which could result in irreparable emotional harm. These children are your blood relatives, Mr. Colburn. Think about that.”

The lawyer pushed a business card toward him.

Lance snatched it and walked out the door, grumbling that he needed some time to think. And he was deep in it when he walked to his truck. He was about to turn thirty, and he was happy with his life in Nome. He’d always been different, adventurous, curious, and like a kind of tumbleweed in his youth. He’d slid through high school, started college to appease his parents, hated it, dropped out, and finally argued with his parents until everyone was miserable.

In the end, he’d done his family a favor by leaving home to find himself. His need for adventure had led him to the Last Frontier—Alaska—where he’d met a few people and gone to work for a petroleum company in Anchorage. When he was twenty-two, he met a man who saw potential in him and hired him as an apprentice in his construction business. He had liked the work, building something out of nothing. He’d grasped it easily, staying for several years and learning the business from the bottom up.

Nome—and the state of Alaska, for that matter—were both growing and in need of construction contractors in both the private and business sectors. Lance had saved his money, taken the leap, and moved. He’d slowly started his small business, amassed good workers and suppliers, and maintained a good reputation. His business had grown fairly quickly, and he was now proud to call himself and the business successful. He loved what he did for a living. A couple of years ago, he had even purchased some land and had just finished building a three-bedroom cabin of his own.

Until today, he’d considered himself as settled as he wanted to be at this time in his life.

How the hell could this be happening, and why hadn’t his sister talked to him about an important matter like this? She hadn’t even told him the cancer was back. He heard a voice calling him and turned as he was about to start his truck.

His sister’s lawyer ran up to him, holding an envelope. “I forgot to give you this. It’s from Gail. Might explain some things. I haven’t read it.” Mandy Colton is from Louisville, KY, and lives a very quiet life with her husband and teenage son. A fan of romance, fun adventure, drama, humor, and on occasion, sci-fi stories. Her first book, Way to Go, and the continuing series came from her years, own adventures and experiences working in the travel industry.

Although she’s a great fan of the human imagination, she is also of the opinion that there are just no better stories than those that involve a bit of true life.

If you like my books, please review on Amazon or Goodreads. Subscribe for notifications on future new releases!

Mandy will be awarding a $15 Amazon or B/N GC to a randomly drawn winner via rafflecopter during the tour.
a Rafflecopter giveaway