For Texans, all paths lead home. That's home to Texas. It seems that actor, Matthew McConaughey is no different. From his native roots of Uvalde, Texas (a South West Texas town of a 17,000 or so residents), then straight up I-35 for the University of Texas (where he attended the graduate program for Film Directing), the actor has traveled quite a few roads in the Lone Star State. He's rather like a Texas tumbleweed, always on the move through the state and his fans never know where he'll turn up next. 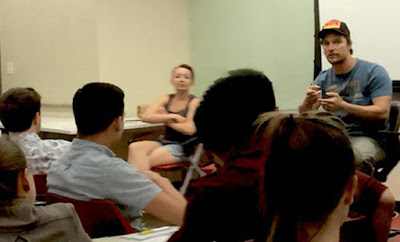 Thanksgiving came early for a group of first-responders (firefighters, police officers, 911 operators) in October 2018 as McConaughey spread a little turkey cheer. Showing up with a catered meal at the National First Responder luncheon, McConaughey wanted to give his own version of thanks to those who'd battle against the winds and rains of Hurricane Harvey. The 'turkey' was specific to his connection with the Wild Turkey organization and McConaughey's promotional tour. Before you get your feathers ruffled that this event was just a photo-op, keep in mind that the turkey was tasty, and the thanks sincere. All who watched news and weather coverage of the devastation left from Harvey and the multitude of heroes who stepped up for the challenge know that it doesn't matter who paid for the bird. Gracious thanks should always be offered to those who serve the many.
Matthew McConaughey gives back to first responders in Texas visit. 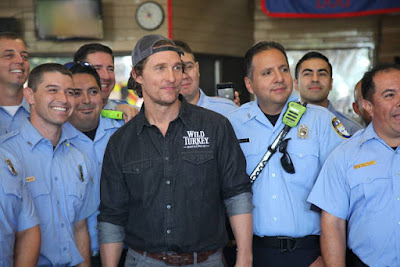 Friday Night Football is no laughing matter to Texans, and neither is their Saturday collegiate love affair. Matthew McConaughey, graduate of University of Texas, is a somewhat common presence at his alma mater. He's been known to show up on the sidelines of UT games, the Longhorn locker room, and even during football practice -- clapping and cheering on his favorite team. Clearly, the man isn't afraid of making a UT statement. The most faithful of the 'hook em' horns' alumni will trot out their burnt orange attire, but not many can claim the suit to match the team's uniforms. Actor takes in Texas practice. 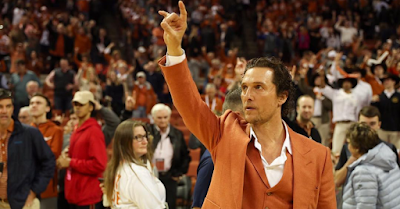 Oh, and it isn't just football that gets Matthew McConaughey's attention: Texas alum Matthew McConaughey to be 'Minister of Culture' for Longhorns' basketball arena. Currently, the actor has been dubbed Minister of Culture for Longhorn basketball. Seems as though, if the Longhorns are involved and there's a ball in play, the actor is ready to cheer on the team.

While his energy and enthusiasm for the state can't be denied, Texans are equally enamored with the film star. Matthew McConaughey Gets Honored at Texas Medal Of Arts Awards with Family By His Side! The Oscar-winning actor was also the recipient of the 2014 Distinguished Alum award: Tower Glows for 2014 Distinguished Alumni 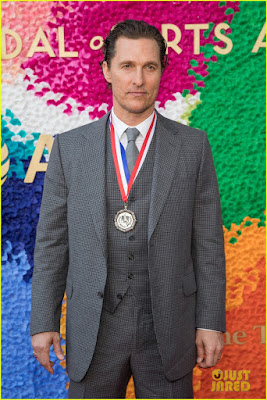 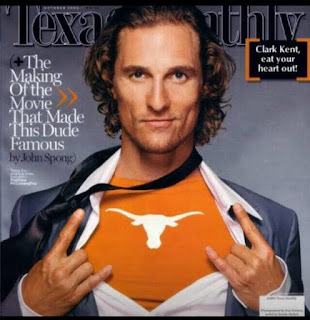 And if you're still wondering if Matthew McConaughey likes Texas parts . . . well, just consider his role in the girl-squealing, power-tool-reeving, larger-than-life bad guy, 1994 remake of Texas Chainsaw Massacre & the 2012 film, Bernie. The Texas tale based on an undertaker who murdered a woman in the tiny town of Carthage, Texas then stuffed her in a deep freeze so he could set out to do good for the town with the dead-old-witch's money. Yep, life is surely stranger than fiction in Texas and actor Matthew McConaughey embraced the role of the prosecutin' (that's Texas speak) attorney.


All-in-all, Texans don't need to head out to Hollywood to rub elbows with famous folks. We just attend a football game or stroll down Austin streets (the actor keeps a residence in Austin -- somewhere) or wait for the next Texas movie to start filming. 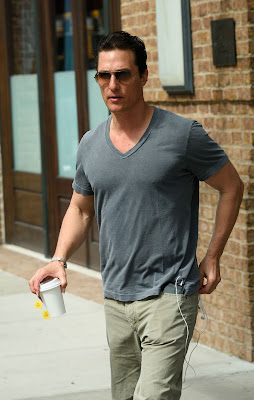