With the English Hospital at Furnes, December 1914 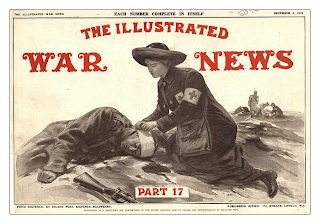 I had a job to do on my first night in Furnes, and earned a dinner, for a change, by honest work. The staff of an English hospital with a mobile column attached to the Belgian cavalry for picking up the wounded on the field, had come into the town before dusk with a convoy of ambulances and motorcars. They established themselves in an old convent with large courtyards and many rooms, and they worked hurriedly as long as light would allow, and afterwards in darkness, to get things ready for their tasks next day, when many wounded were expected. This party of doctors and nurses, stretcher- bearers and chauffeurs, had done splendid work in Belgium.

Many of them were in the siege of Antwerp, where they stayed until the Wounded had to be taken away in a hurry; and others, even more daring, had retreated from town to town, a few kilometres in advance of the hostile troops. I had met some of the party in Malo-les-Bains, where they had reassembled before coming to Furnes, and I had been puzzled by them. In the "flying column," as they called their convoy of ambulances, were several ladies very practically dressed in khaki coats and breeches, and very girlish in appearance and manners.

ne of the soldiers pointed to a house which had a tavern sign above it.
"They've been taken inside." he said. " I helped to carry them." We dodged the litter in the roadway, where, to my amazement, two old ladies were searching in the rubbish-heaps for the relies of their houses. They had stayed in Dixmude during this terrible bombardment, hidden in some cellar, and now had emerged, in their respectable black gowns, to see what damage had been done. They seemed to be looking for something in particular - some little object not easy to find among these heaps of calcined stones and twisted bars of iron. One old woman shook her head sadly as though to say, "Dear me, I can't see it anywhere." I wondered if they were looking for some family photograph or for some child's cinders. It might have been one or the other, for many of these Belgian peasants had reached a point of tragedy when death is of no more importance than any trivial loss. The earth and sky had opened, swallowing up all their little world in a devilish destruction. They had lost the proportions of everyday life in the madness of things.
In the tavern there was a Belgian doctor with a few soldiers to help him, and a dozen wounded in the straw which had been put down on the tiled floor. Another wounded man was sitting on a chair, and the doctor was bandaging up a leg which looked like a piece of raw meat at which dogs had been gnawing. Something in the straw moved and gave a frightful groan. A boy soldier with his back propped against the wall had his knees up to his chin and his face in his grimy hands through which tears trickled. There was a soppy bandage about his head. Two men close to where I stood lay stiff and stark, as though quite dead, but when I bent down to them I heard their hard breathing and the snuffle of their nostrils. The others more lightly wounded watched us like animals, without curiosity but with a horrible sort of patience in their eyes, which seemed to say, " Nothing matters. . . . Neither hunger nor thirst nor pain. We are living but our spirit is dead."
The doctor did not want us to take away his wounded at once. The German shells were coming heavily again, on the outskirts of the town through which we had to pass on our' way out. An officer had just come in to say they were firing at the level crossing to prevent the Belgian ambulances from coming through. It would be better to wait a while before going back again. It was foolish to take unnecessary risks.
I, admit frankly that I was anxious to go as quickly as possible with these wounded A shell burst over the houses on the opposite side of the street. When I stood outside watching two soldiers who had been sent further down to bring in two other wounded men who lay in a house there, I saw them dodge into a doorway for cover as another hail of shrapnel whipped the stones about them. Afterwards they made an erratic course down the street like drunken men, and presently I saw them staggering back again with their wounded comrades, who had their arms about the necks of their rescuers. . . . I went out to aid them, but did not like the psychology of this street, where death was teasing the footsteps of men, yapping at their heels.
1 helped to pack up one of the ambulances and went back to Furnes sitting next to the driver, but twisted round so that I could hold one of the stretcher poles which wanted to jolt out of its strap so that the man lying with a dead weight on the canvas would come down with a smash upon the body of the man beneath.
Ca y est, " said my driver friend, very cheerfully. He was a gentleman volunteer with his own ambulance and looked like a seafaring man in his round yachting cap and blue jersey. He did not speak much French, I fancy, but I loved to hear him say that 'Ca y est, ', when he raised a stretcher in his hefty arms and 'packed a piece of bleeding flesh into the top of his car with infinite care lest he should give a jolt to broken bones.
One of the men behind us had his leg smashed in two places. As we went over roads with great stones and the rubbish of ruined houses he cried out again and again in a voice of anguish:
"Pas si vite I Pour l’amour de Dieu. . . . Pas si vite !”
Not so quickly. But when we came out of the burnt streets towards the level crossing of the railway it seemed best to go quickly. Shells were falling in the fields quite close to us. One of them dug a deep hole in the road twenty yards ,ahead of us. Another burst close behind. Instinctively I yearned for speed. I wanted to rush along that road and get beyond the range of fire. But the driver in the blue jersey, hearing that awful cry behind him, slowed down and crawled along.
"Poor devil," he said. "I can imagine what it feels like when two bits of broken bone get rubbing together. Every jolt and jar must give him hell."
He went slower still, at a funeral pace, and looking back into the ambulance said " Ca y est, mon vieux. . . . Bon courage


This post first appeared on Out Of Battle, please read the originial post: here
People also like
A Guide To Visiting Antigua, Guatemala: The Best 5 Things To Do And See
Should the ends justify the means with Donald Trump?
Two arrests in 2020 killing of Bay Area rapper

With the English Hospital at Furnes, December 1914