THE WINNING OF THE MARNE

This excerpt is by Fredrick Coleman written in 1917 from the book, "Mons to Ypres with General French'

He describes his first hand account of warfare in September 1914. 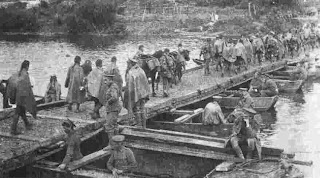 THE WINNING OF THE MARNE
Clean straw strewn on the stone flags of a farmyard made a bed fit for the gods, and at four o'clock on the morning of Tuesday, the 8th, I was as fresh as a daisy and ready and eager for a further push to the north.


This post first appeared on Out Of Battle, please read the originial post: here
People also like
How to prepare mango leaves for diabetes
Shen Men Piercing: Does it work for Anxiety and Depression?
Slot Canyon Utah Guide: 15 Best Slot Canyons In Utah
Online Massage Therapy Courses, are you ready to start today?

THE WINNING OF THE MARNE