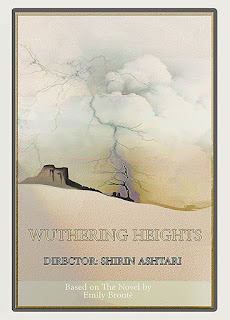 This is a short animated film based on Wuthering Heights which has been touring specialized festivals during the last year:

This short animation is an adaptation of the classic Emily Brontë novel. It starts with the main male character, sitting on his bed playing with a slingshot as he suddenly jumps from the sound of a girl laughing, excitedly searching for her, and this is where the twilight zone begins.

“Wuthering Heights” is my first Animation as a director.
It also has the honor of being the first Animation adaptation of Emily Brontë’s masterpiece.
I presented the film, as the practical production of my MA thesis in Animation Directing in soore University,
The journey that had started many years ago when I first read the book, drove my feelings to give life and animate the passion that I always been through since that time.
Although, the making budget wasn’t huge, Wuthering Heights has managed to be an award winner and nominated for prizes and awards several times.

This is a list of awards received by the film: