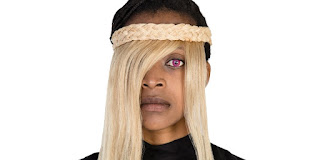 I had reached the forest and you cannot mistake the forest. It is hostile. The path was overgrown but it was possible to follow it. The track led to a large clear space. Here were the ruins of a stone house and round the ruins rose trees that had grown to an incredible height. I was lost and afraid among these enemy trees, so certain of danger that when I heard footsteps and a shout I did not answer.
-Jean Rhys, Wide Sargasso Sea

Under the southern sky, on pakana/palawa country, we invite you to listen to a story about three generations of Caribbean women. White women. White cockroaches.
Grandmother Elizabeth, her daughter Gwen and Granddaughter Antoinette.
Crawl Me Blood brings together Australian artists each with a different family connection with the Caribbean, from Jamaica to Trinidad, from Barbados to Belize.
This work invites you into the gardens to encounter a family drama that lays bare our shared colonial history.

Willoh S. Weiland is the Artistic Director of Aphids, the collective behind the production, and said she was drawn to Rhys’ novel Wide Sargasso Sea because of her own unique heritage.
‘Our interest in [adapting] the book and how it connects to Australia was about this observation of mine as someone who grew up as a white person in a mainly black culture,’ said Weiland, who was raised in Belize until she was 15, but doesn't have family from the region.
Undertaking a rigorous six-year process of research, writing and development, Weiland and her co-creator, Halcyon Macleod, went to Barbados to interview both black and white women in order to develop the characters, in addition to visiting author Jean Rhys’ archives in Tulsa, Oklahoma. The audio element of the work was commissioned by Radio National, the medium providing an opportunity for the audience to listen to the landscape and consider their own relationship with place. For this reason, Weiland said the Gardens are the perfect location, likening them to a vivid metaphoric space, before invasion occurred.
The collective experience of both Weiland and Macleod, whose great grandfather came to Australia as a black Jamaican man in the late 1800s, has informed the adaptation, which carefully scrutinises race relations.
‘The book is about white people and it’s about their inability to look at their role in this colonial horror – but I guess it’s also about the kind of idea of landscape and how it possesses you,’ Weiland said. (Sabine Brix)