Remember the dinner service created by Duncan Grant and Vanessa Bell which included a Charlotte Brontë plate? Keighley News reports that its final destination will be the Brontë Parsonage Museum, among several other things:

Items connected to Charlotte Brontë returned home to Haworth this week following the auction of a large private collection of Brontëana.
The four lots acquired by the Brontë Society include the address panel of a Letter by Charlotte Brontë sent to her father and a portrait of Charlotte Brontë by Bloomsbury Group member Vanessa Bell.
The society also bought a letter written by social reformer Caroline Norton praising Jane Eyre and speculating on its author, and an envelope addressed by Charlotte Brontë to her friend Ellen Nussey. 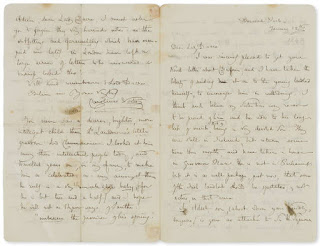 Ann Dinsdale, the society’s Principal Curator, said the society was delighted to have acquired these items for action.
She said: “The address panel of a letter written by Charlotte to her father and autographed by him is of particular interest.
“After Charlotte’s death, Mr Brontë cut her letters into snippets to meet the many requests for samples of her handwriting that came from admirers of her books.
“We believe that this address panel came from Charlotte’s letter to announce her return home following Anne’s death at Scarborough. 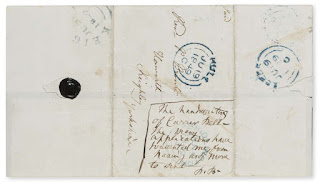 “The Vanessa Bell portrait of Charlotte is also an exciting addition to our collection. It was a design for a large dinner service commemorating famous women, and was commissioned by Kenneth Clark in 1932-33.”
There were 75 Brontë-related lots in the sale by Forum Auctions, which took place in London on Monday.
Amongst them was an envelope addressed by Emily Brontë to Ellen Nussey, but the Brontë Society was unsuccessful in its attempt to acquire it.
Ms Dinsdale said the society was very disappointed to be outbid on the envelope.
She added: “The letter which was originally contained in the envelope is part of the collection at the Brontë Parsonage Museum, and it was hoped that the two items could be reunited and displayed at the Parsonage in 2018, the bicentenary of Emily’s birth.” (David Knights) 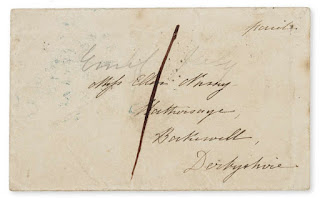 The Scarborough letter is discussed in the Yorkshire Post:

It was an unspeakable bereavement. His wife and their six children had all gone and only their letters remained. Charlotte, his last surviving daughter, had succumbed to suspected tuberculosis at 38. She was carrying his grandchild. In the outpouring of grief that followed, her admirers implored The Rev Patrick Brontë to send them samples of her handwriting as keepsakes. He took out his scissors, put the fragments into envelopes and sent them into the world. A century and a half later, they are still trying to piece them back together. It was, said Ann Dinsdale, principal curator at the Brontë Society, like a game of fridge poetry magnets. This week, however, another tile fell into place. The Brontë Museum, inside Patrick’s former parsonage in Haworth, West Yorkshire, paid £5,000 at auction to acquire the address panel of a letter Charlotte had sent to her father from Scarborough, in 1849. She had taken her ailing younger sister, Anne, to the seaside, in the vain hope that the sea air would relieve her symptoms of consumption. “A dreadful darkness closes in”, Anne had written of her terminal illness. In her letter home, six years before her own death, Charlotte told her father she would soon return to Haworth, and detailed Anne’s funeral expenses. “It’s such a poignant image. Patrick, in his old age, cutting the letters into snippets,” Ms Dinsdale said. “I’ve no idea why he thought it wouldn’t be more important to preserve the letters.” The letter from Scarborough was not the only one he cut to bits, but given its content, it is among the most significant. Fragments of it are in Texas and New York but others are missing. One was already back at the parsonage, where its journey had begun. Its text has been unscrambled from the surviving pieces. (David Behrens)

This new, imaginative live adaption of Jane Eyre is both brave and incredibly well thought through, with Sally Cookson adapting one of Britain’s most loved classics into a phenomenal on stage production. Cookson strips back Brontë’s masterpiece to its bare bones and it is not one to be missed. (Gemma Corking in What's On NorthEast)

Chilling and brilliant masterpiece full of wonder and emotion. A truly fantastical haunting piece of theatre with outstanding actors. A must see production. (Becky Mary in All Things Stagey) 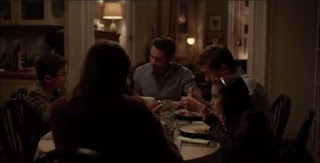 I have to say, while Vik may have his faults (keep in mind he bought one of Furkat’s vagina photographs), he seems to be the only one who cares about the Solloway children. Poor Trevor tries to tell his mother about his role in Jane Eyre The Musical and Helen is detached and distracted.

Hilary Mantel quotes the (in)famous opinion of Charlotte Brontë about Jane Austen in The Guardian:

Charlotte Brontë did not like Jane Austen because she thought she was mimsy, with a fenced-in imagination. But the teenage Jane was ruthless, well read, exuberant and scathing.

The Daily Mail interviews the journalist and newsreader Naga Munchetty:

The book that holds an everlasting resonance… Wuthering Heights by Emily Brontë, a powerful tale of love, cruelty and revenge that I studied at A-level. It was the first book I'd read that didn't sugar-coat life. (Rob McGibbon)

Halifax Courier describes a walk in the West Yorkshire Moors

Cultjer discusses one of the greatest movies ever made, F.W. Murnau's Sunrise:

The photography (Charles Rosher and Karl Struss are credited as the cinematographers) is truly a thing of beauty. It looks like an early Noir but has a lightness to the character that Noir would have cowered from. It is a romance with moments that would suit Wuthering Heights yet it is in no way gothic. It is just a simple, honest film. (SteveAmos)

The Times' Serious Money section is devoted to manuscripts:

“Manuscripts often tell stories in profound ways, sometimes from the content, or sometimes the date can also be enough, such as the letter from Jane Austen at the time her first book was published.”
Ms Rowell says documents from Austen, Darwin, Emily Brontë, Horatio Nelson or Winston Churchill are always desirable. (Marc Shoffman)

Frankfurter Allgemeine reviews An Island of Our Own by Sally Nicholls:

Medium lists the 100 must read books for the Thinking Christian and Jane Eyre is in the 69th position. The New York Times briefly mentions the book Good Night Stories for Rebel Girls which includes the Brontës. The New Yorker also mentions Kay Woodward's Jane Airhead.

Why Am I Pulling Back into My Shell?