"We’re after mucky, but not pit dirty" 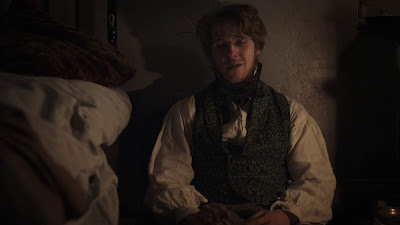 (...) What could have changed Branwell and his sisters’ story? Would fewer early talents have helped, so that he would have been forced to try harder at one thing to support himself? Maybe if he had been less lauded and admired as a boy he would have developed the core of steel that each of his siblings seems to have had - and thus been able to deal, as they did, with the vicissitudes of life. Charlotte and Anne succeeded in their jobs as teachers and turned their experiences into art – Anne’s Agnes Grey was the first novel written from the point of view of a governess, giving a voice to the quiet army of young middle class women who were being forced by changing times and economics to make a living in the only (semi-)respectable way they could. Charlotte suffered at least as much as Branwell when she fell in unrequited love with her tutor, Monsieur Heger, during her time in Brussels, but created The Professor and Jane Eyre out of it instead of destroying herself. And Emily escaped from everything unbearable not through the bottle but through Wuthering Heights.
Or maybe that wouldn’t have helped. Maybe modern theories are right, and some of us are simply predisposed to alcoholism or addiction and it is only through the greatest good luck that we avoid the fall – and Branwell simply didn’t have the luck.
Wuthering Heights surely uses him as the model for (later) Hindley and parts of Heathcliff, and Jane Eyre likewise for John Reed’s decline; but Anne’s second book, The Tenant of Wildfell Hall, is the most obvious and specific fruit of the family’s experiences with Branwell. The story of Helen Huntingdon escaping her violent drunkard of a husband remains the most vivid, unsparing and accurate account of living with an alcoholic in literature.
Branwell gave his sisters, certainly, copious material. Perhaps he even strengthened those steel cores by the example he set of what could happen if you let your passions rule you. Did it make up for all he took from them? The answer walks invisible still.

The Times looks into the settings, dresses, make-up:

To Walk Invisible may be a period drama, but this being a Wainwright production, it isn’t all bonnets and heaving bosoms. “I don’t often watch period dramas because I’m a keen historian and I very rarely see something that makes me feel transported in time,” she says. “I think that the film Mr Turner did, but it’s rare. We live in a disposable, takeaway culture and it’s easy to forget that people didn’t then. Everything that you owned was looked after for a long time — you’d have a thing for 20 years in a way that we just don’t now, but a lot of period dramas that you watch, everything looks brand new. There are certain period dramas I’ve seen recently where you wouldn’t be surprised if someone got out their mobile phone. I wanted to create a feel and a look where something like that would not happen.” (...)
“Authenticity was key to everything we did. There’s already so much myth- making surrounding the Brontës,” says the production designer, Grant Montgomery. “We didn’t want to romanticise the area.” And indeed they do not, although, fortunately, they stop short of the entire truth. These days Main Street, which leads to the Brontës’ home, the Parsonage, is a picturesque cobbled road lined with gift shops and cafés. However, for filming the modern shop fronts have been masked. It’s an amusing scene, this de-prettification; at one point a woman rushes into the road with a jar of dirt that she begins vigorously rubbing into a small dog. (...)
As the hair and make-up department points out later, no one would be taking regular baths in mid-19th century Haworth. The production is going through vast quantities of artificial dirt each day (“We’re after mucky, but not pit dirty,” I’m told).Nagaitis wears more make-up than the rest of the cast — he needed it to give him the hollowed-out look of an addict, says Jessica Taylor, the head of make-up and monarch of a wonderful, but also completely and utterly barmy world. To Walk Invisible’s hair and make-up department has a beard extension grid, which takes up a sizeable chunk of Taylor’s studio. All the men in the show have fake facial hair attached to them every day. (Fiona Wilson)

The Eastern Daily Press is very excited about the production:

This looks so promising that I might have to loosen my bodice to contain the excitement. Written by Sally “Happy Valley” Wainwright and boasting a stellar cast, the one-off drama takes a new look at the extraordinary Brontë family. Fingers crossed Kate Bush will be in the background for (Yorkshire) peak perfection. (Stacia Briggs)

This Christmas’s big original period drama is a feature-length biopic of the Brontë sisters written by TV screenwriter du jour, Happy Valley’s Sally Wainwright. Another dark Yorkshire saga, it tells the story of how Charlotte, Emily and Anne overcame a difficult upbringing, including dealing with the troubles of their alcoholic brother, to write the novels that earnt them their reputation as literature’s greatest siblings. Chloe Pirrie, Finn Atkins and Charlie Murphy star as the three sisters, Jonathan Pryce plays their ailing dad. (iTeam)

The Open University has also put together some resources related to the production:

Watch exclusive videos with Sally Wainwright and the cast and crew of To Walk Invisible.
Test your literary knowledge in our interactive quiz 'Which Brontë sister wrote it?'
Try a free course 'Start Writing Fiction' or 'Approaching Poetry'.
Take it further and become a Creative Writing or English literature student at The Open University.
Meet the OU's academic consultant for 'To Walk Invisible', Dr Sara Haslam.

Hebden Bridge Times has a photo slideshow and more information.

Village Soup announces one of the 2017 courses at the Coastal Senior College (University of Rockland, ME):

Perhaps you remember the romance between Cathy and Heathcliff in Emily Brontë’s “Wuthering Heights” or Jane and Rochester in Charlotte Bronte’s “Jane Eyre”? In the class “The Brontës: ‘Is This the Same Book I Read When I Was Young?’” participants will re-read and discuss these well-crafted Victorian cautionary tales with Gothic conventions. Maryanne Ward, who leads this course, says “Sex, madness, the moors and a couple of ghosts; just what you need to keep warm on a winter night.” Ward has 40 years’ experience in small college education and has also taught many literature courses for CSC. This class begins on Feb. 9 and meets for six Thursdays, from 1:30 to 3:30 p.m. at the Schooner Cove Library on the Lincoln Health campus in Damariscotta.

Here’s the thing about orphans: just as nature abhors a vacuum, art abhors an orphan who goes without family too long. Rare is the orphan who doesn’t find a home, even the most self-reliant ones in literature. “The story of the proud, saucy, self-reliant orphan Jane Eyre ends with the chastened, religious, privileged, and satisfied wife and mother Jane Rochester,” notes Jerome Beaty in his essay “‘Jane Eyre’ Cubed.” And Tom Sawyer’s adventures are sheltered and sometimes even sanctioned by his Aunt Polly. (Erin Blakemore)

Videogamer reviews, in the web's opinion, the best game of the year, Dishonored 2:

It is now accurate to say that, while I enjoyed Dishonored very much, my feelings towards it when compared with its successor would be as a spring fling to the fervent orisons of love in a novel written by a particularly flustered Brontë sister. (Alice Bell)

The Shields Gazette discusses a vintage picture of Cleadon Hills:

To me, it brings to mind a scene from Wuthering Heights, perhaps depicting Catherine walking across the snow-clad moors looking for her beloved Healthcliff. Mind you, my colleague thought it was more like something from Tolkein’s (sic) Middle Earth. (Peter French)

"We’re after mucky, but not pit dirty"