Happy New Year Everyone! I hope that 2017 will be a good year. :) These are small Writing updates that I do once a month to talk about what I've been working on recently, and my own experiences of trying to self-publish without spending tones of money. 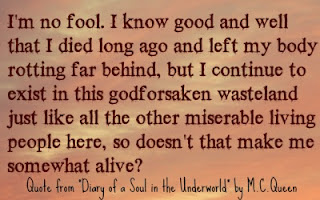 Recently I've mainly been working one my free story Diary of a Soul in the Underworld. (You can read all the chapters I've done so far here.) My current goal is to try and finish it before I write anything else, and it's been taking me a little longer than I originally expected.

It's a story that has been in my head for a long time, so I won't be satisfied until it's finished. I've currently been writing it chapter by chapter and posting it on free fiction websites such as Booksie and Fictionpress.net. I guess one of the reasons why I decided to write and post this story chapter by chapter was because I thought it would motivate me to keep going. I regally loose my motivation to write (about once a month) so I thought that it would be better to at least have part of the story out there for people to read while I wallow in despair.


I find the main character, Ethan, very interesting. Unlike the main character in my last story, How I was Murdered by a Fox Monster, Ethan has a much more dark and pessimistic view on life due to everything he's seen and done during his time in the Underworld. Daisuke has a past that slowly becomes clearer as the story progresses, but Ethan is nobody. He starts from zero with nothing, and everything he has he's had to struggle to get it on his own. He may not remember his time alive, but it's not relevant. He has to try and find a way to escape on his own with only his own strength and hard work.

I also recently got my first review for another one of my stories Khan and the Kingdom without Gods. I've been giving away free copies for months but I didn't get any reviews until now. I'm super happy that this person decided to give me four stars on Amazon. If you like any of my stories please leave a review. It would help me out a lot.

As for my life outside of writing, it's still busy with work like always. I also recently entered a driving school. I'm not really that young anymore, but I never enjoyed learning how to drive (a.k.a fighting with my parents) so I put off learning how to drive for the past ten years. In some ways it was good because I was forced to exercise in order to get anywhere, but if I want to survive in the countryside then I really need to learn how to drive a car. I've recently been taking lessons after work and on the weekends, and I'm almost halfway through the driving course.

Sometimes my main jobs can feel stressful and I would rather focus more on writing, but I need them to pay my rent. Selling ebooks is difficult and you can put a lot of work in and get nothing in return, so I've recently made the decision to put my personal life before writing. I can get more done if I spend less time with my family and friends, but on the flip side my work may not sell at all, and I can end up distancing myself from people for nothing.

I've recently come to accept that my stories may never become well known, and I may never actually make enough money to life off, so I've decided to just write the stories the way that I want. Sometimes I often find myself thinking I could do that, but it might not be interesting enough, or I could do this, but it's not very mainstream. But I've decided to stop worrying about such things and just do it the way that I want to. Writing is a fun hobby for me and I find that it helps with stress, so  I'm just going to continue to write at my own pace whenever I get the time.

If you enjoy my work you can always support my stories by buying them, leaving reviews, or sharing them with your friends or family. It would help me out a lot!

How I Was Murdered By A Monster King

Obake are spirits and monsters that take the form of animals to blend in with the natural world. A secret organization exists to protect mankind and eliminate all Obake. Its agents are commonly referred to as “exorcists.” My name is Daisuke Matsumoto and this is my Story.
Last time we met my training was going great until a super powerful fox monster attacked and my teacher tried to kill me. Now my friends and the organization are accusing me of being a monster in human form, but that can’t be possible, can it?
Grab the ebook and paperback on Amazon!

Tales From A Land Of Gods

Outside our world exists one of gods. A place where the gods reign supreme and humans live like days of old.

Meng is a unique god who becomes lost in an endless forest. His only chance of escape is an old dying mortal who brings back memories of his past which he would prefer remain forgotten.
Read chapter one for free here

Khan and the Kingdom Without Gods

Khan is a dashing thief who travels to a small kingdom without gods in the hope of seducing their beautiful princess. He is instead drawn to her unusual bodyguard who has a few secrets of her own. Little does he know that a great battle between mortals and the gods has just begun.
Read chapter one for free here

How I was Murdered by a Fox Monster

They say life flashes before you in that moment before death. I could see it all reflected in the blade. I was standing under the cherry blossoms at my school entrance ceremony, eating cake at my sister's wedding, standing outside praying the monster wouldn't come tonight. I might not be dead yet but I can see what's coming, this is the story of how I was murdered by a fox monster!

Grab a copy here on Amazon