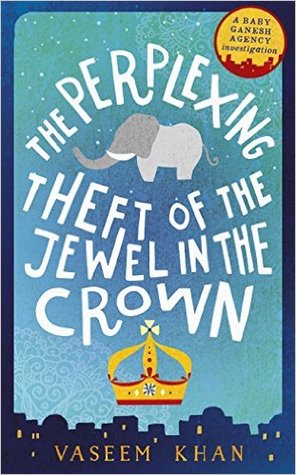 For centuries the Koh-i-Noor diamond has set man against man and king against king. Now part of the British Crown Jewels, the priceless gem is a prize that many have killed to possess. So when the Crown Jewels go on display in Mumbai, security is everyone's principal concern. And yet, on the very day Inspector Chopra visits the exhibition, the diamond is stolen from under his nose. The heist was daring and seemingly impossible. The hunt is on for the culprits. But it soon becomes clear that only one man - and his elephant - can possibly crack this case.

Last part ended with Retired Inspector Chopra starting his detective agency & restaurant. Both of his plans were instantly hit. But life is not that grateful for Chopra. As the restaurant was managed by her mother-in-law, he had to be on his toe due to her harshness. On other hand, detective jobs were not as great & interesting as his unofficial case of human- trafficking. In his quest, his ex-subordinate also joined him. There were many changes came into Chopra’s life after human trafficking case, which kept the story interesting. Introduction of Irfan’s part was a warm heart touching.
The narration of Vaseem Khan is simple yet powerful. It can take you on the ride of Chopra’s life with as realistic touch as possible. The characters’ development makes you fall in love with the story. Talking about detective part, Vaseem Khan has again created an impossible looking case of Jewel Theft, the beginning of which even made me think how it happened.
This books or I would say series have emotion, drama, sarcasm, humor, thriller & suspense, I think many books with just one of this ingredient became a big hit. And this book has each ingredient in the perfect mix. I am glad my 2018 started with this book. A perfect read for any age group.
Talking about ratings
Book can be found at Amazon & Flipkart
Review from other readers can be found at GoodReads

Crystal Travel US – Independence Day …
A Guide To Visiting Antigua, Guatemal…
How come so many Christians don’t rea…


This post first appeared on Few Good Reads, please read the originial post: here
People also like
Crystal Travel US – Independence Day Flight Deals
A Guide To Visiting Antigua, Guatemala: The Best 5 Things To Do And See
How come so many Christians don’t really know God?