Louisa June and the Nazis in the Waves by L.M. Elliott (MG Historical Fiction Book Review) I received a copy of this book from the publisher in exchange for an honest review. All thoughts and opinions are my own. 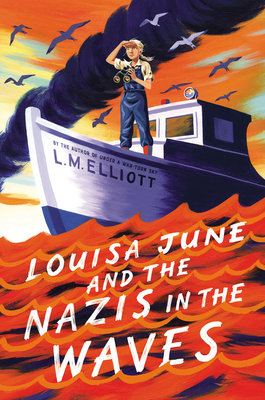 Synopsis:
In this moving and timeless story, award-winning author L.M. Elliott captures life on the U.S. homefront during World War II, weaving a rich portrait of a family reeling from loss and the chilling yet hopeful voyage of fighting for what matters, perfect for fans of The War That Saved My Life.

Days after Japan's attack on Pearl Harbor in 1941, Hitler declared war on the U.S., unleashing U-boat submarines to attack American ships. Suddenly, the waves outside Louisa June's farm aren't for eel-fishing or marveling at wild swans or learning to skull her family's boat--they're dangerous, swarming with hidden enemies.

Her oldest brothers' ships risk coming face-to-face with U-boats. Her sister leaves home to weld Liberty Boat hulls. And then her daddy, a tugboat captain, and her dearest brother, Butler, are caught in the crossfire.

Her mama has always swum in a sea of melancholy, but now she really needs Louisa June to find moments of beauty or inspiration to buoy her. Like sunshine-yellow daffodils, good books, or news accounts of daring rescues of torpedoed passengers.

Determined to help her Mama and aching to combat Nazis herself, Louisa June turns to her quirky friend Emmett and the indomitable Cousin Belle, who has her own war stories--and a herd of cats--to share. In the end, after a perilous sail, Louisa June learns the greatest lifeline is love.

Louisa June and her siblings live what Louisa's big brother, Butler, would have called an idyllic life, all together on a family farm nestled on the coast of Virginia. Louisa's mom grows daffodils to sell at market, her father captains a tugboat, and her siblings are finding their way, ready to head off to college. Except that it's the 1940's and war has descended upon the U.S.
Just four days after Japan bombed Pearl Harbor, Germany declared war on the United States, sending U-boat submarines to take out as many oil tankers, freighters, and other vessels along the East Coast as they could. When Louisa June's father and brother, Butler, are caught in the crossfire, Louisa must step up, take on more responsibilities, and fight to keep her mother's spirits up, all while eager to fight the Nazis herself.

Focused on a little-known bit of WWII history pertaining to the U.S, this heartwarming middle-grade story features a happy, loving family that is directly affected by the Nazi submarines that terrorized the East Coast of the U.S.
Despite the focus on war and the disaster that torpedoes brings to the coastal communities, this is a magnificently positive story that finds the light and hope (and poetic beauty) in every little moment of every day. Louisa June is a brave and resourceful character that is always willing to help and finds every opportunity to tackle and turn around her mother's occasional melancholy and bring her family together.

This middle-grade novel is well-researched and includes extra information on the events mentioned in this book in the author's note at the end of the story.

Many thanks to the publisher for the review copy!
This was such an enjoyable read!

Louisa June and the Nazis in the Waves by L.M. Elliott (MG Historical Fiction Book Review)