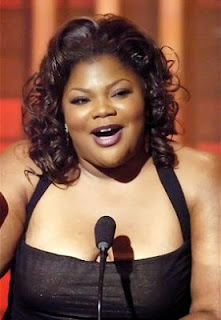 The "real" is metaphor for authentic Black.
Our stars cash this in. Some of our writers present it and it pays back.  I saw today Monique suggest we boycott Netflix so she can get equal pay.  Ironically, the article I read said she took some flack for the Oscar acceptance speech referenced here.  That might make sense.  We admired it, and other folks thought it was perhaps a bit ungrateful.  Black speech is coded.  We must be mindful of the white audience.  Especially in acceptance speeches and award giving ceremonies.  The point is to be thankful in such situations, supported by the other point-that the you may not be able to do this on your own.
Here is a short Free Black Space take on the character Precious, Monique, and the world of Push by Dr. Valerie Prince.
Free Black Space

In 2010, Monique won an Oscar for her role as best supporting actress in Precious. Precious is the movie based upon the book Push by Sapphire about an obese, young woman who is sexually abused by her father and physically and verbally abused by her mother. At the time, I had neither seen the film nor read the novel. But I decided to do both in the weeks following her win. And I was able to do so with less trepidation because of two things Monique said: the first in an interview with Barbara Walters preceding the Oscars and the second during her acceptance speech.
First, when asked if the character she plays reinforces racial stereotypes, Monique responded that she was playing an abusive woman. Abuse, she maintained, occurs in every segment of society and she simply happens to be black. I know this answer is idealistic and oversimplifies the issue but I like it. This response challenges the pervasive sentiment that insists on seeing black, ghetto life as inherently pathological and therefore, any portrayal of that pathology as “real.” This was the word that caught my attention, in particular, when I was listening to NPR’s lead-up to the Academy Awards. The speaker characterized Precious as a “real” portrayal of an abused girl growing up in the ghetto. I literally winced when I heard that description.
In the pantheon of cultural production, stories about violence and abuse in the black community are considered “real,” while other narratives like the moving story of an African American girl propelled to the National Spelling Bee by the support of her entire community is dismissed as “unrealistic.” This mentality is a holdover from racist belief that continues to limit acceptable black narratives within the white imagination. So Monique’s insistence that Precious is not intrinsically black is important, even if the film within itself fails to reinforce that position.
Secondly, in her acceptance speech Monique, the skinny-bitch hating, proudly fat comedian, was nowhere to be found. Instead, the woman who took the stage was a dignified African American woman who knew her place in history and accepted responsibility for the debt paid by her foremothers. Monique called upon the legacy of Hattie McDaniel, who was the first African American to win an Oscar for her role in Gone With the Wind. Ms. McDaniel played the role of Mammy on a plantation in Georgia, and Monique acknowledged McDaniel’s sacrifices as the foundation for her own success.
Since Ms. McDaniel’s win in 1939, many talented African Americans have won Oscars for a broad range of roles. Sidney Poitier won an Oscar for his role in Lillies in the Field; Louis Gossett, Jr., Whoopi Goldberg, Cuba Gooding, Jr., Denzel Washington, Halle Berry, and Jennifer Hudson have all won Oscars. Perhaps, my own wounds from racial discrimination are sensitive to what only appears to be the Motion Picture Academy’s persistent willingness to recognize African American productions when they represent the most disturbed and pathological segments of society.
I assigned the novel to my freshman composition classes where I taught at an Historically Black University. I wanted to assign Toni Morrison’s The Bluest Eye, which I feel effectively conveys similar themes in a more sophisticated language but I was afraid that few of my students would actually read it. The popularity of the novel Push and the film Precious suggested to me that perhaps my students would be more likely to read. It turns out, the students read and engaged the novel and we were able to have a discussion about the issues of content both inside and outside of the novel. In a world when it seems that students may well have given up on reading novels altogether, I remain hopeful. I accept Monique’s idealism and choose to believe that the whole is greater than the sum of its parts.
Free Black Space


This post first appeared on Free Black Space, please read the originial post: here
People also like
President Biden’s Budget Invests $2.8 Billion to Support Economies, Outdoor Recreation and Access to Public Lands
How and Where to Buy HXRO Token – An Easy Step by Step Guide
Serena Williams And Other Celebrities Who Believe Will Smith’s Career Is Over
CHI – Hair Styling Products