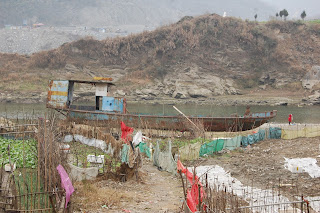 " China does not share the West's missionary impulse - it no longer seeks to export revolution, as it did during the days of Chairman Mao. Its goal nowadays is primary counter-revolutionary: like Moscow, Beijing's real aim is to rupture the West's claims to universalism. Given the latter's dubious record in Iraq and elsewhere, this is not a hard sell. It is easier than before to make the case that America's liberal-democratic discourse is a cover for its geopolitical interests."

Edward Luce from The Retreat of Western Liberalism

Yesterday  at Bowie State University I gave a presentation on Chinese culture and a report on my experience teaching at Central China Normal University from October of 2016 until June of last year.  My talk planned to discuss practical applications from Chinese education for Bowie instructors to use in our classrooms here.


What was set to be a panel presentation became more of a round table discussion.  Given a talk on China can be difficult.  Now I am thinking about a talk given by Afaa M. Weaver  where he discussed the principles of Xing Yi Chuan, which are centered in the five elements theory and seek to mimic the actions of organs in the body.  One could say the same of Taiji, which among other things centers around a ball that you hold by tucking your body tail bone in, straightening your spine, and aligning your body.   Or to make it even more practical, if one begins to read the Tao, it becomes obvious that the aphoristic form of Chinese wisdom contained in the book demands one not only learn, but begn to traverse teh distance between Chinese Culture and the West.   china's 1.6 billion people, its extremely long recorded history, and the size of the country also give some sense of how enormous Chinese culture is.

One other point may suffice.  When I talk about China, I usually use the enormous amount of accumulated knowledge in China to explain the well known difficulty the Chinese seem to have with notions of Western creativity.  For Western creativity seeks an innovation and discovery that for the Chinese mind may seem impossible.  No doubt the Chinese are creators, and innovators, but perhaps more so refiners. For so many nuanced, detailed, and precised systems are in place, one must learn to submit to extensive periods of study to simply understand what masters are talking about.

Mastery is the Chinese counterpart for Creativity and involves learning vast stores of accumulated knowledge in specific and precise ways.

All this to say, a round table allows Americans/African-Americans who have little knowledge of China to dialogue and bring to the table what they know and use their own consciousness to seek out the next steps in their journey.  I was thankful for such a thoughtful and engaging group of participants.  After all, I am a professor.  One of my greatest privileges is to work with extremely intelligent people who have dedicated vast portions of their lives to the pursuit of knowledge.

Here I present some of what I learned from the dialogue with my colleagues.  Much of what I learned was factual.  Participants added to my presentation news stories about China, I was unfamiliar with.  Mentioned historical facts I need to do additional research on; and shared some of their engagements with the country.  Those items I will not include here. Instead, I will focus on what I learned about the process of engaging China and its culture's outside the West from a Western perspective.  There are three main concepts I will list here as a brief outline:

1)  Given the vast size of China, its history, and the lack of familiarity with even the basics of its language and culture-direct forays into Chinese Culture for Americans/African Americans should be discussions rather than lecture style presentations.

2) African-Americans in particular often underestimate how the amount of knowledge required to properly engage China, partially because our own culture is often engaged by others who do so without a sophisticated, nuanced view of our culture.  Black History is not required knowledge to navigate relationships with black people.  Chinese people might suggest to you that you don't need to understand their culture to interact, but you should.  Without it you will not be able to properly understand the depth and significance of some of the interactions. (Actually you will never be able to understand all of them-but you can continually understand more)  Finally, for this point, while it seems obvious that we should know something about the culture of the people we are dealing with, much of Black History records the absence of a basic etiquette that needs to be established for cultural engagement.  That Americans and African Americans underestimate the need for such etiquette is a direct result of our survival under less than perfect circumstances.  Where we imagine we may not need that sophisticated understanding to manage relationships, Chinese attempts to learn Western culture, really reflect how significant they imagine Chinese culture to be.  We are African-American with a culture that is negated, mis-understood, and considered by some to not exist.   Though things are much more complex, we often operate in places were we have to fake like they are that simple.  If one does so with China, one will sooner or later realize things are far more complex.

3)  African American and African engagement of China often applies the same perspective to Chinese culture that Western culture applies to China and African American culture.  In other words African Americans imagine they can analyze and effectively interact with Chinese culture (for purposes here theoretically) without studying or understanding the culture.  In this regard our approach is understandably an extension of our training and mimics what we have been taught and experienced.  The truth is that U.S. and the West has imagined Africa as a Dark continent and not suffered a destruction of their economy due to the oversight.  China, however, has in part made such dramatic success in its interactions with the West, because the West imagines that Chinese culture matters as much as all the other cultures it has subjugated.  This may not be the case, and is an important part of the Chinese advantage.  The sophisticated approach from the Edward Luce begins to get at this.  Universalism is an important part of the West's ego.  The density of Chinese culture makes Western universalism laughable, but the position of the Chinese approach is difficult for a Westerner to grasp given the position of Western values and concepts in much of the world.


Finally, though not a point emerging in the workshop, I must say here, that the tendency to underestimate the complexity of Chinese culture by those in the West is perhaps the most significant and exploited advantage they have on the world stage.  The difficulty is an extension of colonialism itself.  For colonialism has worked as an effective strategy for the West for so long, it is hard to fathom that it may not work somewhere; or that someone has cracked the riddle.  The particulars of this point would easily fill many books.  But still it must be said here.

This post first appeared on Free Black Space, please read the originial post: here
People also like
Albania: Explore the Forgotten Side of Europe – 15 Best Things to Do in the Albanian Lands
The Friday Roundup – Ambient Audio, YouTube Mistakes and GIFs
Useful Tips for Building a Stronger Company Culture
How come so many Christians don’t really know God?
30 Epic 50s Hairstyles for Men That Are Popular Again