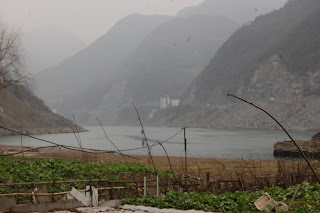 My time in China changed my approach to writing.   To be truthful I think the country jacked up my personal discipline. For the myth of discipline as I learned it in the West is that we acquire and move forward, that we become something we want to become.  Discipline as I knew it was an act of will.

But my window into Chinese discipline over time through my taiji practice in particular began to erode my sense of a discipline of knowing.  The Tao Teh Ching says that the sage forgets something everyday as compared to learn it.  It seems mystical and proverbial, but studying art forms that have been around for centuries changes ones approach to learning.  Though math, science, and many of the things we learn here-arguably fit into the same category of accumulated learning just like Taiji the process was noticeably different.  Though I practice almost everyday, what was retained or learned seemed to be far less important than the doors opened to the new that emerged in the practice.  My consciousness changes and the focus slowly becomes centered there.  The knowing is replaced by the revelation.  But the revelation doesn't last.  One becomes almost confused in a whirl where one explores the intricacies of the system.  New things emerge mysteriously connected to what you have been told, but imagine you needed belief to grasp.   The experience literally reveals belief as a tool, a way station on the road to the goals the system is certain of.  Words are difficult to attach to the process; but then again the Tao teaches us about the range and limit of words.   For those into the fractals-it may be that taiji learning upon the composite of the body is clearly engaged like fractals.  Each nuance and detail leads to more and more nuance and detail.  Most profound, detail and nuance present different levels of experience for the practitioner.  Nothing stays the same in the practice.


While many suggest they believe in democracy, hidden behind our actions are the hope and drive towards being something in the realm of creation, which is knowingly distinguishable from  the other creations.  It is ego at its root.  We want to be an I, even if we want to exercise a collective power with other Is and be a we.

Taiji's democracy is the human frame:  the spine, the limbs, and the center. Even as individuals most we share these components.

Taiji is an art.  My other art or at least one of them is poetry.  Here on FBS my writings about the literary industry and my experience as an African American poet, attempt to capture the gap between the experience of poetry for me and the negotiation of the systems and codes of poetry.  It seems, and I am just becoming aware of this as I write, that the internal experience granted a reader of poetry is a sense of union with words, union with past experiences, union with the moment, and the imagined union with other humans who experience similar situations.

It will take a while to actually formulate thoughts about China for writing.  Some of the earlier post here on Free Black Space written during my first few months in Wuhan attempt to describe my experiences as those of a traveler.  I discovered rather early that China fits well into the travel journal's gaze.  For China exists behind the veil of a language that few Westerner's speak.  The travel journal is an essential pat of the colonial apparatus.  Without colonialism much of the traveling, exploration, and discovery would be bad literature.  The traveler does not know the culture, but witnesses it and then exports it back to the home country, home audience.  In spite of the lack of knowledge of the culture, the literature survives because the traveler speaks the language of those back home.  Craft, truth, nuance, detail, and precision are managed by the literary infrastructure at home.  Many of the critiques, revisions, historical investigations and rethinking of important texts and the canons are simply ways of interrogating the ground of audience.  Many of the myths and contradictions worked in real time because they fit the consciousness of the people they were written for.

For instance, I was always hesitant to attempt to pronounce the Chinese name of Confucius to Chinese people.  His name Confucius is interesting to say the least.  He is unquestionably one of the greatest Chinese philosophers of all time whose name sounds like the English word confusion.  The Chinese know this and have no problems speaking of Confucius to foreigners; but then again they know their own language.  Only a travel journal or foreign literature could get away with such.  The Free Black conversation on code that is at the heart of this blog does not simply pertain to African American culture-here we have an instance of code that refers to Chinese people.  Confucius as a name is negative code attached to another society.

Recently a good friend sent me some information about the relationship between African writer's and American publishers.  African women immigrants have done well in the past couple of years in the book industry.  In one instance, the scholar mentions how a twenty-three year old, got a six or seven figure deal.  In some places at some times, literature is one of the greatest exports.  We imagine the tea, coffee, silk, and rubber; but also there is Bible, the King's English, and the great classics of the Western World.  And if there are exports, there are imports.  An import is a medal for the empire, like a newly discovered country.  A kiwi fruit.  A pineapple.  A book by a black man who knows the way of the suite and the etiquette of the empire, the culture of the civilized.  Such trends continue on into today.  That they make money, in the end, may be more important than what they suggest about culture and the human condition.  Maybe not, but maybe.

Though the root of the work is different, my writing rhythm in China was quickly transformed by all that I saw in China that seemed similar or recognizably different, but it was only the surface.

China is literal the middle country in Mandarin.  The Symbol for Zhong is 中, which is easily discernable as a representation of the middle.  I might also add that the Dao Teh Ching states in section 8 that the "highest good" to paraphrase a translation or the "best of men" is like water.  Water in the I-Ching, the great Chinese classic is two Yin lines with a Yang in the middle or this 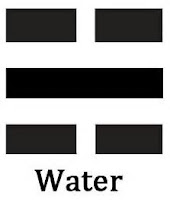 If it seems a bit confusing, inherently philosophical, and perhaps impractical, one can easily understand why China perplexes the Western mind.  Safe to say the Wuhan China I lived in for almost nine months is a vibrant urban area with the bang clash of New York.  The over twelve million residents of China move in and out of the worlds of commerce and complicated transport systems, or walk the cities beautiful parks and gardens, sing at K-TV, eat up tons of great food, and keep their heads burrowed into their cel phones everyday.  They are modern in ways many Americans may not a similar counterpart on the other side of the world twelve hours ahead.  On the surface it is that simple.

Robotime LC701 Time Art Romantic Note…
10 Best Restaurants in St. Augustine
VENNA Shares 'Sugar Venom' EP - @iam_…
Apple Scrapps Plans to Launch Low-Cos…
Writing Holiday Stories: Tricks (and …
But the differences will have to wait.  If you ask most Westerners or Americans about China they will automatically let you know what they think is different about China.  The media supplies us with enough cover stories to feed that:  is it the copy cat image pasted into intellectual property disputes, is it cheap manufacturing, is it the enormous population, is it the treatment of women, is it the pollution?  China, like most places outside the West, can easily become a series of buzz images and ideas for its relationship with the West.  However, if you stay a while you will grow accustomed to the fact that you don't understand much.
In fact, what may distinguish the Chinese mind from the Western Mind is a clear understanding of the limits of knowledge.  Even what we call understanding might be better addressed as a union or not knowing in the Chinese sense.  America is a young country that obviously knows little.  Mind you, four hundred years ago, those who helped establish America as a colonial outpost for Europe imagined that the world was flat and that if they traveled towards the sea's edge they may fall off.  If anything the myth gives insight into the European approach to the world outside of Europe.  On the other hand, the Chinese relationship with knowledge has been cultivated for millenia.   It is essentially so long that it defies ideas about the West.  In China, I would sometimes hear Westerner's refer to the myth of a Chinese Continuous Civilization or the narrative of a Chinese Continuous Civilization.  What makes this so odd for me is the narrative of Western Civilization handed down to the current guardians of it by the members of the Western World.  Granted world history is complicated and difficult to grasp; but a Western education with such limited information about China makes it rather easy to be humbled by the arc of Chinese history.
In this way the Chinese themselves are humbled by the vast amount of knowledge accumulated in their own country.  The idea of discovery and a personal narrative that imagines one discovering something in their own personal life that is unique and different from all the accumulated knowledge that spins around you, in my experience, did not seem as significant to folks I met.  One way to describe it is a group of little i's instead of big ones situated in a complex family structure.
I'm trying to explain how the notion of the travel journal or the idea of witness became unraveled for me.  Most of it seemed to end with a more expressed commitment to the language.  Mandarin is a series of symbols/characters that are different from our alphabet in many ways, though the most important distinction for me was the absence of phonetic markers.  One has to use memory to link the sounds with symbols/characters, and then remember the intonation or tone along with the sound.  To imagine you understand what the Chinese understand when you cannot even read and speak the language soon starts to wear away at your sense of intelligence.  Most Chinese (and Westerners too) think Chinese is the more difficult of the languages.  In short, I believe them.
So the idea of being a traveler and scholar in another country became replaced with the idea of being an infant, a beginner, a guests who in many ways was tolerated and amusing.  My daily discipline of writing and reading was replaced by a more sustained engagement with what I didn't know.  Humbling as it was, it may be one of the best things about China.  Foreigners learn to engage what they don't know without imagining they will ever know it all.
My taiji practice and relationship with the language were sustained, but one can't help but be overwhelmed by the range of ideas and concepts one is exposed to.
﻿