Transcendence moment: The University I taught at in China offered a course called the Bible as literature. One of the unique things about Chinese culture is its "isolation." Colonialism makes certain features of the Western World seem like they are obvious. Many Chinese people have to learn the idea of "God" as practiced by folks in the West. There's really nothing obvious about it.

Coventry, from 2 Tone Ghost Town to C…
Why Furries Make Excellent Hackers
How Does the Fortinet Firewall Work?
Microalgae can be a potential feed fo…
Tea Culture in Different Corners of t…
In the book China Mirage by James Bradley he tells a rather intricate story about how Chiang Kai Shek converted to Christianity to help sway American popular opinion to give him aid against the communists. Though that's the most tangible and prominent example, the book is full of examples of how Chinese people who knew how to navigate Chinese culture, managed (one might even say manipulated) Americans through the use of Christianity. In other words, they knew there were advantages offered by them being Christians.
When I first taught in China, I found many of the lessons offered at the school to be far too elementary. One issue was my lack of experience as an ESL teacher, but the other was the integration of cultural ideas as part of the lesson. A fork as compared to chopsticks is a rather simple example. The fork is a piece of culture that we all recognize and can use. Given the dynamics of China, some people have never eaten with a fork. The example is clear but in some ways superficial. One of the amazing things about China is folks simply don't know some of the cultural attitudes that are essential to the Western framework. No doubt, that number grows smaller and smaller everyday.
For instance the concept of God. In one of my classes we read a short article, which discussed God an and angel. When students responded in their papers and in class they consistently referred to God as the The God. It was rather fascinating for me. They put an article in front of God, which clearly marked it out as cultural territory.
I spent almost all of my education as a child in Christian and Catholic Schools. Grammar-Empire of Language-for those that read Free Black Space. We were taught that God must always be capitalized-cuz he's the only one; and that because he is the only one there could never be an article in front of his name. That my students couldn't help but refer to him as the God fascinated me. Here it might be resistance to contextualize God in that way, or worse blasphemy. There it was all packaged in a strange innocence that had the same effect. 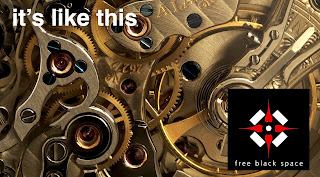 This post first appeared on Free Black Space, please read the originial post: here
People also like
Coventry, from 2 Tone Ghost Town to City of Culture
Why Furries Make Excellent Hackers
How Does the Fortinet Firewall Work?
Microalgae can be a potential feed for aquaculture species
Tea Culture in Different Corners of the World
Bangkok: a virtual tour through film, food, music and books
Short Happiness Quotes From Famous and Unknown People