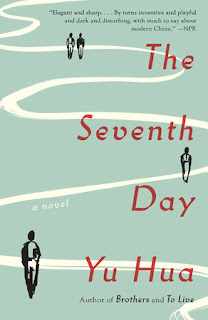 I’m looking out of my window at trees whose blushing fingertips herald the coming spring, despite the fact that they are standing ankle deep in snow.  The only constant is change—that’s what I thought looking out of the window at those trees after reading Yu Hau’s fifth novel, The Seventh Day published in translation by Anchor Books, a division of Penguin Random House in 2016.

11 things to do on vacation with out …
30 Cheap & High ROI Home Renovations …
Well said Mr. PM, We’re racing with t…
Best Places To Visit In Melbourne For…
Muslim Woman
At the opening, the reader meets the protagonist who’s already dead.  Yang Fei awakens on the first day to find instructions taped to his door.  He’s to head to the funeral parlor for cremation.  The difficulty is that he has died without anyone to mourn him or to prepare for his burial.  And we soon learn that the realm on this side of death for Yang Fei, might be as full of social order and directives as the life encountered on the other side.
It’s not a new idea of course that the after life is merely an extension of many of the rules that govern our present life.  What makes The Seventh Day such an interesting read for me is that in The Seventh Day China is processing ancient ideas in the context of a modern city.
The questions Yu Hua poses about the nature of the city remind me of “The Man Who Lived Underground,” Richard Wright’s short story about Fred Daniel’s flight through the sewers of the northern city.  He retreats to the sewers after being tortured by police into making a false confession.  Daniels’s journey uncovers a shadowy under world, a part of the metropolis designed to remain hidden.  From his underground perspective, Daniels unwittingly exposes the city’s inner workings—a crime for which he must ultimately pay.  Wright’s story expresses the disaffection many felt in the wake of the Great Migration, when the northern city failed to present itself as the Promised Land of milk and honey.
In the US, the Great Migration of the twentieth century saw the movement of 6 million African Americans from the rural South to the industrial North.  This barely registers as a blip on the scale used to measure the twenty-first century Chinese migration wherein 250 million people will move from farms to cities by 2026.  But, many of the same questions found African American literature about leaving the country for the hope of a better life in the city resonate through Yu Hua’s contemporary Chinese fiction.
Unlike Wright whose literature is protesting the brutality of a reductive racial code, however, Yu Hua’s answer is rooted in a society ancient enough to remain moored despite the massive cultural upheaval wrought by mass urbanization.  Nevertheless, the novel grapples with real questions.
What happens to one who, at his birth, literally falls through the cracks of a train—the emblematic vehicle enabling the migration?  What kind of life will he have?  And what kind of life does the city make for a people who find themselves living there?
Like the trees outside my window, Yu Hua represents the nature of change in its simple, relentless, beautiful march.  Take this scene, for instance:
“It was dusk by the time he reached the park.  The lingering rays of the setting sun illuminated a grassy lawn, and several rocks scattered across the lawn and jutting out of it caught the warm colors of the setting sun.  He search among these rocks for the one he carried in his memory and felt that the dark rock among them looked a lot like the one that I had sat on so many years earlier” (166).

Memory and time and place keep changing and it is difficult for anyone to go back to where they’ve been.