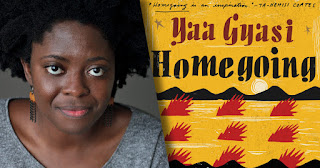 I had heard about Yaa Gyasi’s Homegoing first while listening to NPR and then I saw Yaa (a travel companion who happens to have the same name as the author) reading it when I met her while waiting at the airport gate to board our flight to Accra.  It’s a novel about sisters and their descendants who would not know each other because of the disruptions produced by trafficking in humans.  Traffickers benefitted from squabbles among communities in West Africa, before ballooning to an obscene scale with the engagement of European nations to become what is known to us now as the Trans-Atlantic Slave Trade.  Gyasi writes an epic to tell the story of the slave trade’s intergenerational, inter-continental impact on a family.

Cabbage Production Guide
How To Kill Carpenter Ants
How to Fingering a Woman: Complete Gu…
Two Tools That Help Me and Others Nav…
Adam Lawson interview I The EIGHTH, u…
I know I am supposed to like this novel and even if I don’t—to take one for the team.*
(Note*:  “The team” is the code that lumps black people together into some kind of community based on our presence in a racially stratified country.  The code says:  Do not make any public statements that might hinder “black progress.”  So if the young sister has written a book with complex representations of black people that white folks love, then that individual accomplishment is good for “the team.”  If you want to be considered part of “the team,” then you do not violate the code.  There will be consequences for those who do.)
Where was I?
Maybe “like” is too reductive a term to describe my response to the novel, which was published by Alfred A. Knopf in 2016 to much acclaim.  After all, I really don’t likeNative Son, but I teach it often because it’s really important and good.  Likewise, Gyasi’s Homegoing is worthy of careful consideration.
SPOILER ALERT**
(Spoiler**:  I was struggling already but by the time I got to the Great Migration when Robert, who at the behest of some presumably influential white men, screws his wife Willie in the men’s room of the nightclub where she cleans, I was done.  My initial thought was:   Did no man ever who loved his wife.  WTH?  Even if there is one man who would, for the sake of advantage in a city as dynamic as New York, rape his wife as show, that man is necessarily the exception.)
END SPOILER
It is hard for me to read a book that adheres so closely to the code that suggests that racism is so powerful that it collapsed the humanity of every day black people.  No.  Black people are the ones who made the jazz that those white men came to the club to imbibe.  And sure they came for alcohol and sex, and undoubtedly some of the sex was forced, but jazz is undeniable evidence of the triumph of black humanity, not its degradation.
It was sung by Bessie Smith, Ma Rainey, Clara Smith—black women who could not pass a paper bag test like the one used to deny Willie access to anything besides a broom and a mop, when her primary reason for going to a club in the first place is her extraordinary voice.  The club owner holds up a paper bag to evaluate her complexion and Willie accepts the mop rather than opening her mouth to sing.
There are moments, mostly in present generations, when the novel moves beyond the codes that propagated slavery and finds the complex truth of human experience.  However, generally Homegoing forgoes the potential to disrupt simple dichotomies.  The representations of generations on both continents are consistently coded in terms like British/Fante or Missionary/Witch Doctor or light skinned/dark skinned.  And even when the Ashante are rendered beside others in a way that invites a sophisticated reading as in the scene when a Chief’s daughter is kidnapped and married to a Big Man’s son, Gyasi undercuts the potential of this collective wisdom by depicting a loveless marriage full of bitterness.
But I have been married long enough to know that there are many ways to be married.  And what begins one way, can become another.  Kwame Nkruma espoused a Pan-African philosophy and his marriage to Egyptian Fathia Rizk was an extension of the kind of social structure that held political sway in Africa before the introduction of guns.  Amiri Baraka, in his own way, understood marriage as a political act—divorcing one in order to ally with another.  The young believe passion is the basis of enduring love.  America is young.  And American divorce rates are high.
The title is like a promise.  Of course, Homegoing is the inevitable celebration at the sunset of life others call a funeral.  But throughout life going home matters to black people.  My family’s ancestral church in rural Georgia still has homecoming the third Sunday in August.  People travel back to those places where they can’t seem to live any longer.  They travel because there’s something there for them.  Something they want their kids to have access to.  They dress and they cook and they eat and they drink and they laugh and they fight and they fuck and they mend fences.  That’s homecoming—every year God send.
Moreover, I walked on that ground in Ghana.  I entered those dungeons and wept until I nearly fell.
There are paths in Asanteland where they walked captives across rivers that are marked with red cloth.  They tossed the bodies of those who did not make it in those rivers.
They tell the story of Yaa Asantewaa who rallied the people to stand against the British who demanded the Golden Stool.
Better late than never.  Better late than never.
Still.  They tell it.
The fact that we are alive is evidence that black people did not collapse.
Show us Robert’s love—as broken as it is.  Give us slavery, but also present the hunger beneath it that still rattles at the cage around our own hearts.  How easy is it to say slavery=horror?  How hard is it to hear rhythm in the salt water slapping the walls of the hold that beat out sorrow songs all the way across an ocean?
Was the whipping post 32 measures in 4/4 time?  Cause they didn’t kill us.
They didn’t kill us.