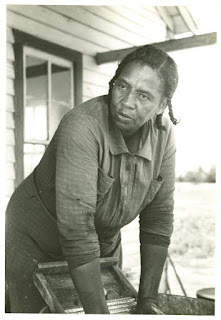 I’d like to say a bit about what I’m driving at with a piece like Waterbearer. Waterbearer is a lyrical piece of historical fiction about what it means for African American women to do laundry. But there are many questions beneath the words that are really important and remain unresolved.

The primary question undergirding Waterbearer is the question beneath most of my work post-graduate school. It’s about reclamation. Connections. Inheritance. Heritage. And work. And only in the previous generation has work in my heritage been assigned more than little to no value—at least not for those performing the work. The labor, however, was very valuable for those benefitting from it as owners or employers and for the nation by and large as the labor helped propel the country to the top of the world economy.

But for me, the question lingers—is there a way that the technologies of work can be channeled through a black infrastructure? Can black knowledge be assigned a value apart from labor in this economy?

Often I think about my grandmother who was not exceptional. She was like the vast majority of African American women born in the South just after the turn of the century. She had very little formal education. When it was time for her to retire because she was old and couldn’t really work outside of the home any longer—she went to draw Social Security and they told her that there was almost no money for her because she didn’t have a work history. The government claimed that this woman who toiled endlessly for decades hadn’t work! Absolutely preposterous!

That made an impression on me which I haven’t been able to shake. There is some work that gets counted and other work that is completely invisible to the ostensibly humane systems that society puts in place. But then there were those women who joined the public workforce because my grandmother did the work in their homes. Many of these women would draw social security.

The question, too, is what happens to the knowledge if we abandon domestic service as simply part of a system of oppression and discrimination?

What if we—the daughters and granddaughters of those workers—cannot see value in the work either?

Where does the knowledge go and to what end, if we cannot find a way to create infrastructures that assign a value to the labor as technology?

That is, after all, what makes systemic racism so effective and insidious. We think the battle against racism is about changing the way people think about us—that there shouldn’t be implicit bias in the way people see others who are different than themselves. That white people should think that black people are smart, beautiful, courteous, etc., etc. All that’s really great. But that’s not what I’m driving at.

Under slavery, the majority of the people doing work didn’t have control over or a stake in the infrastructure. As a result, all of the value of black knowledge is immediately funneled away from the workers. The labor belongs to those who control the infrastructure. Integration, then, does not solve one of the most enduring problems of racism that keeps African Americans disenfranchised because it does not deal with the question of infrastructure. Instead, even as it opens up new avenues for individual black workers, it continues to keep black labor within infrastructures that do not offer African American communities any control or economic stake, except at the level of management or laborer.

This is the question that is under my work. This is why most of the writing I do now draws on alternative content, but it also takes unconventional form. And so too for my teaching. Mechanisms must be put in place to create infrastructure through which black knowledge can flow.


Waterbearer by V. S. Efua Prince staged at Allegheny College under the direction of Beth Watkins on 9 February 2017.