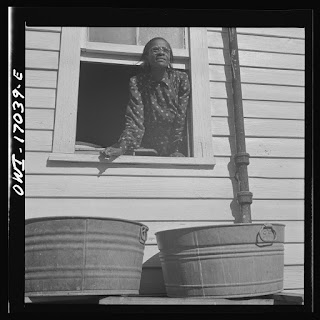 Mother defined herself as a lady.
A true lady. She
Never snubbed anyone.
Never slighted anyone.
Was always
Graciously sorry for any unintended slight.

Besides
No woman, black like Mother, living anywhere on Earth had the gall to treat anyone like dirt.
Be it
Red dirt. Yellow dirt. Black dirt. White dirt.
Besides the Chain placed all dirt
At the same bottom level.
Platinum dirt. Gold dirt. Silver dirt. Worm dirt.
All dirt is dirt.
The stuff of life.
Atoms. Electrons. Protons. Neutrons. Molecules.
Composed and recomposed into flesh.
All flesh is grass.
One step up on the Chain.
Dirt. Grass. Flesh.
Names in an arbitrary system of classification intended to order life.

How did the arbitrary become a fixed and permanent order?

Mother breathed and thanked the three-mile road from her classroom to her backdoor for being there for her to walk upon.
A road that led from many precious five- and six-year olds—every year a new batch—to the eight more precious fruits of her womb—every day her purpose for being.
A road covered with asphalt from La Brea. Trinidad’s black oil mingled with dirt.
The stuff of life and death.
People killing for oil. Black oil. Black gold.
Names given arbitrarily value transformed to absolute power or the lack thereof.

Mother talked lovingly about the lotus flowers of her classroom
Each lotus flower a beauty borne from a womb black like hers. Cherished and cherishing.

“Their being,” a gentle correction of a pupil who said, “Them being.”
A yesterday lesson on gerunds and possessives
Still useful today as a reminder that human “being” is the interchangeable noun and verb linked to the
Great I Am

The cause of “her being”

Head bowed
Eyes downcast
Sighs comingling softly and gently with the whispered,
I Am.

Presence heard in the present tense, “I Am.”

Yesterday.
That “once upon a time” moment of arm stretched forward to
Today.
The now that never exists but in a breath, a blink, a finger pointing toward
Tomorrow.
The promise always of feet in motion. Never standing still. Carving a new path on the road often tread.
East to West. North to South. Vice versa.
Poles shifting for new paths to be made.
Nothing fixed or permanent.
Except
Perpetual Voice and Eternal Movement always to remind, “You Are Because I Am.”

“But didn’t you say that the verb ‘be’ didn’t exist in Ancient Hebrew language?”
“Are you telling me that someone invented ‘beingness’ and imposed the invention upon An Existence that remains beyond the scope of Its creatures’ imagination?”
“Now, you want me to believe that I cannot question your invention?”
“That’s madness. You’re mad and the cause of my mother’s mania. Her hysterical blindness borne from her bi-polarism and the cause of my manic depression. Our schizophrenia. Our collective intelligence. Don’t tell me otherwise. Your language, your sounds are incomprehensible.”

Ha! Whoever heard of Hysterical Blindness that cannot be cured?
Ha! Whoever said that words on a piece of paper couldn’t potently cause perpetual confusion?

“We in the African Diaspora are ploughing paths to the light,” Mother said.

Her blindness came in the letter from Grenada
From a second-cousin she imagined to be in love with and loved in return
That goddamned letter received on that goddamned day
That read:
“My mother says that you are too black to be loved.
Pretty black girls like you will never be good enough
to be a wife or mother. Only good as a flo’ cloth. The fate
of black ’omen.
She told me to write this and I just obeyed her.
It would have been hell to pay if I didn’t.
You know what I mean.”

What did your goddamned, black-lakka-me mother mean with her Grenadian accent that cut off letters and leave the word’s meaning ambiguous?
Worn-out words and their meaning roiling in darkness.
Full of witchcraft. Obeah, they say. Voodoo, say others.
Knowledge and language stripped of meaning along the Middle Passage.
Disaffecting language in its uselessness.
“Black ’omen,” spit out with such disdain. The phrase’s meaning unclear.
No, crystal clear!
“I get it!”
Black ’omen means omen. Banes. Curses. Doomed and damned.

Sycorax still dictating and bewitching you and me into perpetual confusion and chaos?
Colonized language that has nothing to do with the Great I AM who refuses to keep sound and song confined in Proper or Improper. Good or Bad. Blessings or Curses. Black or White.
Language of witches and wizards and sorcerers and sorceresses.
Their distracting sleights of hand
Their dullening sounds of bombardment to cause disorientation, disaffection, and disillusions.

Black women and her children’s legacies exacerbated by neo-colonization. Neo-oppression delivered in old-packaged behaviors. Call them what they are: rape, sexual assaults, domestic violence, intimate-partner violence. Oh, yes! Witchcraft and sorcery are alive and kicking!
Kicking the s**t outta us and sending it back to the dirt to be recycled in whatever new package you want to call it. But it will still be the same s**t!
Boomeranging! Ha!
Remitting! Ha!
But only for so long because flo’-cloth time has already been changed, Caliban!

Cursing words have already been recycled into blessings.

Black and red. Red and black. Colors in the spectrum of sound already valued equally.

Alpha and Omega. Logos and Spirit. Two in One. First and Last.

’Cause
Before time began,
Son of Man agreed that
His Precious Blood would flow freely with no cloth to catch It
When It fell upon Earth’s floor
For It was meant to plop on down
To the dirt and cleanse all the dirts
Of all their impurities! All nastiness!

Precious Blood mingled with “It is finished!” to reverberate in harmony
Before time
During time
After time
Transcending history, culture, and language
Perpetual sound in a beautifully perfected song—

Call: Blood drop.
Response: It went, “Plop! Plop!”
Call: Blood cry!
Response: “It Is Finished!” said with a sigh.
Call: All flesh made holy.
Response: Red. Yellow. Black. White.
Call: Spirit and soul made whole.
Response: Woman redeemed.
Call: Daughter of God reclaimed.
Response: Mother restored to her rightful place.
Call: Say what?!
Response (with a neck roll and finger snap): “Mother. Is. All. That! And. A. Lady. To. Bout!”

Now, you deal with IT!

Dr. A. Myrna Nurse earned her doctorate in English from Temple University (’99) and currently is an associate professor of English at Delaware State University (DSU) located in Dover, Delaware. She holds the following positions in the Department of English and Foreign Languages: Faculty-founder of Alpha Rho Xi, the local chapter for Sigma Tau Delta, the International English Honor Society; Lead Faculty-founder of the minor program in Women’s and Gender Studies; Chair, Composition Program; Test-builder, English Placement Test She has authored Unheard Voices: The Rise of Steelband and Calypso in the Caribbean and North America (2007), River of Fire: Incidents in the Life of a Woman Deputy Sheriff (2009), “A New Black Girls’ Club: Mentoring Doctoral and ABD Candidates in Academia,” book chapter in Career Moves: Mentoring for Women Advancing Their Career and Leadership in Academia (2014), plus multiple book reviews and scholarly articles in postcolonial discourse.