The Writing or Painting is on the Wall 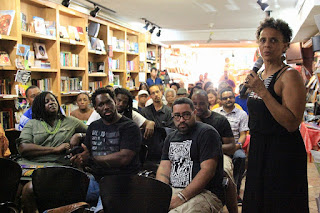 December 31, 2016, I shared these thoughts during a New Year’s Eve gathering at Sankofa Video and Bookstore. At this year’s event, we watched Ava DuVernay’s new film on mass incarceration and the history of the exploitation of black labor, called 13th.


I was looking for a blank sheet of paper today. It was the only way I could stop myself from pulling aside a couple of white women exiting the locker room into the main lobby at my favorite black rec center in my favorite black neighborhood. They were passing by while I was captivated, as I often am, by the joyful faces of black children and families painted on huge murals on the walls of the center. These faces are a part of my daily ritual of: swimming with my husband, locker room chatter with the ladies to exchange remedies or recipes for raising black children or confronting racism. As if this isn’t refreshing enough, I then exit into the main lobby to find warm, welcoming, smiling faces staring at me from the walls. Today, after having swam with a majority of new white faces, none of whom spoke a word in the locker room, I was sitting in the lobby, waiting for my sister-in-law to finish dressing, and as usual, filling up on the joy beaming from the walls. As I watched the coming and going of the new white faces also in the lobby, and the faces on the mural looking down – I was struck. It was then that I realized, I had to grab the arm of one of these new white faces… and ask them… “what will you do with the paintings on the wall when you finish taking over DC?” Before reaching out to grab this white stranger, I realized… I needed to find a blank sheet of paper. - I was not ready for 2017.


One year ago, we were gathered in this august place celebrating the joys of being together, warmly wrapped in the best of ourselves, rejuvenating ourselves in our cultures, food and friendship. We spoke of many things as we danced, drank wine and sang. Gentrification, at the top of the list. In 2015 and most of 2016, the re-colonization of the world, and specifically Washington, DC, penetrated and shaped most of our conversation, it penetrated our movements and it penetrated our plans for the future. At the beginning of the year I was making arrangements to host an art exhibit called “where is Chocolate City?” a chance to air out feelings of black people whose city was hosting more and more whites, and whose culture was being bullied in the process. By the end of the year, that question itself cannot be uttered, for it is a question that only adds salt to the painful reality that Chocolate City is no more.

So here we are facing 2017, no longer discussing something called gentrification, because the question of gentrification itself has accelerated into a blurry flow of images, a current catching all things black and beautiful and musical and original and poetic, and innocent and blossoming; a current where gentrification was only the beginning of a larger process of suppression, where the right populations were engineered into the right places at the right time, where the right surveillance technologies lined up their ears in the right phones and the right homes, where the pretense of democracy can give way to the reality of fascism, where the grinning face behind the empire’s microphone peels away and the monster underneath can operate without pretense. What is the name of this new current?

At a recent screening of one of Haile’s films, a young lady raised her hand to ask a question. She had just seen Haile’s film in which a young man had to find himself, who he was, in the middle of the mayhem of the 70’s. This young lady said that given all that is going on in the world right now, she feels very afraid and she asked if Haile had an recommendations. Haile, not missing a beat, said: you need to find solace from the ancestors. Once you place yourself in the continuum of history, you will know your role and you have no reason to be afraid.

And indeed, our ancestors have left their mark for us to use as weapons. Alice Coltrane, Miles, Nina, Gil Scott, Jacob Lawrence, Elizabeth Catlett, these are the people that sheltered me today, when I went home and found my blank sheet of paper, to write on and to share with you tonight. The end of 2016 finds us gathered in this same warm, happy place, emboldened by our culture and history of giants, of gallantry and courage sitting on these walls. We are facing 2017 with big eyes, watching a scaffolding being erected, one plank at a time, each one designed to take away rungs in the ladder that all of these great, courageous people have constructed, people who are named and people that are unknown, a ladder that leads us out of degradation, disrespect and the worst subjugation. The question written on the wall, across the skies, is what do we do about it? As we watch don’t we remember that this same scaffolding was being put in place since before we were born, and it never prevented resistance. For each rung on the ladder that they try to dismantle, we can erect another one. Wherever we are, whatever country, whatever language. Our children speak the same language, “love me and let me love you.”


Watching people tonight on this screen, fighting against dogs, both two legged and four legged, fighting against not just individuals, but against systems that set those dogs and water hoses loose – I plastered myself on that screen, with all the fortitude it took to stand up – face to face – against wrong. That generation left it’s baton, and they expect this generation to pick it up. The writing is on the wall. It’s on the screen, it’s on the bookshelves, it’s on the musical note, and it’s on the murals of our joyful children’s faces.


Shirikiana Gerima is the owner of Sankofa Video and Books & Cafe--A cozy place for great reads and great coffee! Specializing in books and movies about people of African descent since 1997.


This post first appeared on Free Black Space, please read the originial post: here
People also like
Don’t make this Rings of Power marketing mistake
Things to Do in New York City This Weekend
Erik ten Hag backs himself to turn things around at Man United

The Writing or Painting is on the Wall