The Mission In The Age of Trumpism by Kevin Logwood 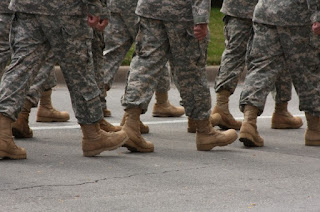 While serving in Afghanistan I walked through an office of military contractors, black contractors. They were working and watching the results of the 2016 election roll in over the wall mounted television. Whistling on my way out I noticed the lack of 'getupness' and lowered morale amongst them so I asked, “Who's winning?”

Several glum responses followed.... “Trump's got this one man.” One of the brothas spoke, a concern that seemed to be the elephant in the room, “Now all of these white folks with an agenda are going to feel like they have a purpose and that's going to be a problem.”

I almost walked out but I stopped short of the door and turned to face them all and very nonchalantly I explained to them, “Do you gentlemen have any idea what your ancestors survived? They have been trying to kill us and break our morale since before this nation was founded and they have failed. As a great American President once said, “You have nothing to fear but fear itself.” They listened and I walked out.

In the age of President Donald Trump what should be the response of Black America as he and his Republican cronies attempt to roll back so much? You cannot control many things, however, you can control what you, what we decide to do as single entities. My answer to you is simple, do great things in your communities and in your personal lives. Leaver your mark for they will never forget it. Work harder, strive harder, find your business niche and do positive things because they can never take those things away from you or from us as a people.

Fall on the swords and the examples of your ancestors and over come yet another adversity. Become the upstanding American citizen because they can't take it away from you, you've earned it, more so than most ethnic groups who live here. When in doubt remember, that your forefathers built this nation and made it the economical power that it is today and don't you dare allow anyone with a lighter pigmentation attempt to strip that away from you. You've earned it now, own it and when the time comes to oust those who do not represent our free Democracy built on the ideals of Lincoln... be finally in the economical and social positions to right the wrong before you. That is your duty and that is what you will do.

Born in 1970 in New Orleans, Louisiana, I was raised in a Catholic household in a typical blue collar, two parent family. The city of New Orleans was a never-ending muse for a young kid who loved to write and critique the science fiction thrillers of that era. At the age of fifteen I had written my first science fiction, non published novel.

I joined the U.S. Army in 1989 at the age of nineteen and became a Public Affairs Journalist where I wrote a number of special interest features for different military publications. My military training in journalism came in handy when in 1992 I defended a young chemistry student at Indiana University, Bloomington, Indiana from the racial harassment of a fellow student and the apathy of the IU administration. Using my writing skills and military journalism I was able to bring state-wide recognition to racial incidents on the campus of IU and was featured in a news story in the Indianapolis Star.

I have worked professionally as a Cisco Certified Network Engineer most of my life but writing has always been my passion. In 2004 I published my first book, a nonfiction work critiquing America's IT industry and business practices. The IT Professional's Industry Almanac, http://oraclerea.sys-con.com/node/45717, written under the pen name of Eathen Anderson.

In 2012 I volunteered as a contractor with the U.S. Army to support missions as a technical liaison in Afghanistan. I was almost killed while overseas by a massive blood clot that had silently developed in my right leg. I was medivaced back to the U.S. But was able to use my time back in the States to attain a Bachelor's in Information Technology from Capella University in the fall of 2013.

In the summer of 2015 I returned to Afghanistan as a contracted technologist and it was while serving there I lost my wife of 17 years to Lung cancer.

I have always written and I enjoy writing across various genres. Most of my works and ideas are fiction based, however, the events in my country have moved me to write more about societal and political upheaval. I am currently writing various short stories about my travels in the Middle East as a U.S. Army contractor. I describe myself as a passionate Christian, African American, who is a red-blooded, American Patriot who believes in doing more and talking less. I have long engulfed and preached the belief that this American country is just as much if not more entitled to African Americans than any other people due to the enormous suffering and injustices African Americans have endured in the United States.

The Mission In The Age of Trumpism by Kevin Logwood