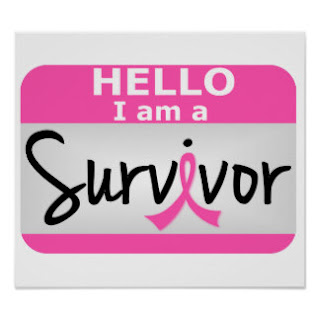 Survivor is a strange word. It connotes so many possible paths of analysis and definition. Usually you talk about the verb, “surviving,” as in “surviving” a wretched dinner with in-laws, or “surviving” exam week, or “surviving” a harsh winter. It’s an action, something you have done, accomplished, and then are back to a regular self. But to be a survivor, that becomes a label, a definition. To be a survivor transforms the act of doing into the act of being. That’s a lot and it hides a lot too because usually to “be a survivor” you’re not talking about having experienced something easy or pleasant. It’s usually used to connote some kind of life altering experience, tied to something that was “done” to you, and you are now a survivor even though it happened.

And even more disturbing, definitions of survivor also indicate that a survivor is someone who has lived after a “disaster” has killed others, that is you are someone who lives while others have “perished.” In other words, inside the word “survivor” is the recognition that others have not lived through whatever you just went through, and that whatever you lived through was a “disaster.” The very word survivor connotes death, identifies you directly with death. You’re always attached to that death you survived not dying from. As a survivor you are linked to death; it now becomes an identity you carry with you into whatever other life you’ve made after the disaster grabbed you.

In the world of breast cancer, survivor is a badge that carries all forms of strangeness and everyone, from your family, to your doctors, to strangers think of you as a survivor. Even the American Cancer Society talks about survivors and estimates that there are around 2.8 million breast cancer survivors in the United States. There are plenty of other statistics too, 1 in 8 women will be diagnosed with breast cancer each year. Breast cancer is the second leading cause of death for women (I would have thought it would be heart attacks, but no). You have a 1 in 36 chance of dying from breast cancer, i.e. of not being a “survivor.” In the world of breast cancer, your life becomes very much invested in this world of survivorship, and you want to join that club. It’s the only one that counts.

Except I hate almost every single metaphor attached to cancer. And I really don’t know what to do with a word like “survivor.” In lots of the everyday language and culture of cancer, cancer is the “enemy,” and you are “in a battle.” You “fight” cancer and then you are a “survivor.” The whole story, the whole arc is one of war. And I know, I know, it’s supposed to be empowering. I’ve seen it be empowering as fellow cancer patients and families in the chemo room talked to each other about her “fight,” that she’s “winning,” that she’s a “fighter.” In those moments when you’re hoping to not vomit, or hoping your mouth sores aren’t going to ache, or hoping your white cell count has stabilized, or that your liver enzymes aren’t simply astronomically high, the idea of fighting and being at war has a certain ring of truth. And the idea that you have a choice, that you fight, that you have some kind of power as this disease does its worst to you, I get that. I know there’s value there. You want to fight.

The metaphor of war, of battle has definitely been successful commercially. We’re asked to donate to help “the fight” against cancer. We’re asked to join in this group, this club of sorts, to be part of this battalion that’s going to win. And who doesn’t want to win. Who doesn’t want to know that there’s a way out of this disease and that you might get left unscathed. There’s nothing totally wrong with this. It brings in money. It makes people feel like they can really contribute. Because what is true is that the people around you, the ones that love you and watch you vomit or shake or faint or lose your hair or drive you to the hospital with 103 degree chemo fever, the ones that try to make you food you’ll tolerate or can even swallow, the ones who tell you that you will have better days, the ones that do not know what to do to help you except to be there watching you suffer, they are helpless and they want to fight for you. They want to fight with you. They want to be on your side and win. The metaphor works. It brings your people something to carry across as they trudge through airports and long drives to keep you company from your thoughts, to keep your body from killing you.

Being sick and having cancer isn’t like the battle or the metaphor, though I know there seems to be a place for both. Being treated for stage two breast cancer this year has made me aware a truth so basic it is almost laughable: I am not in control. This does not mean I didn’t try to find control. And this does not mean I found some new kind of peace or comfort in God. I’ve been wrestling with the divine for years before I got cancer. I am still wrestling. I am still a practicing agnostic. Cancer has given me no new insights about any divine plan.

The insight I have is embodied, and it’s only mine. And it’s hardly revolutionary. My body is still processing what it has meant for me to have had cancer, and that means, at least for me and at least for now, I do not have a clear sense of what my body will tell me or teach me in the future. Honestly, I have no idea what cancer means. Cancer has not brought sudden new, beautiful, or illuminated insights. It’s not something that’s over or done. It’s not here the way it was before, but it certainly isn’t just over.

A friend of mine explains it like this: at first cancer is right on top of you in the driver’s seat. Then it takes a place right next to you in the passenger seat. Eventually it sits in the back seat. At some point, it will move to the trunk of your car. But it’s always going to be in the car. You’ll never travel anywhere without it again. That is hard. The word survivor belies that truth. You want to be a survivor because it means maybe you got lucky. And you did. You’re not dead. But hearing yourself called a survivor startles you anyway, every time you hear it, especially about you, because it hides over the reality that you had so little do to with being alive after it. And the word survivor hides all the post-cancer that is still part of cancer you’ll deal with indefinitely.

It’s the strangest feeling of all, to know something happened to you, and you had no control over it. By luck and privilege of health care and doctors and just sheer grit of pushing doctors to believe you when you found something that just didn’t feel right, you’re here, after chemo and surgery and radiation. You’re “post-cancer.” What you know is almost nothing. You only know you were lucky. You had nothing to do with the cells in your body growing or being charred to oblivion. You’re now here, after cancer. After treatment. After. And it looks like there’s still a tomorrow and a today. And you are lucky and not in the least bit special. You are just here. And you hope. Just hope. And that hope smells a bit different, feels a bit different. It’s not special. It’s just yours.

M. Soledad Caballero lived through cancer this year. She's a teacher and a poet. She's an associate professor of literature at Allegheny College. Her critical work focuses on travel narratives about South America. Her poetry focuses on immigrant stories and memory (for now). She has a strange and beautiful family, and her husband makes her laugh everyday.