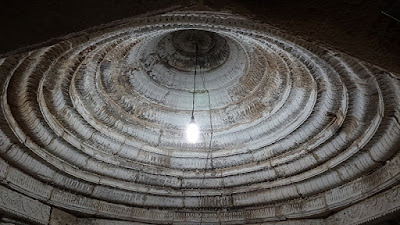 Temple ceiling at Somnath
Turkic forces of the Muslim Delhi Sultanate began conquering parts of Gujarat in the 14th century. Even before that, Muslim forces had invaded the region. In the early 11th century AD, Mahmud Ghazni (971-1030) arrived at Somnath, and ordered the destruction of the great temple he found there. Zafar Khan (Muzaffar Shah I, died 1411), a Hindu who converted to Islam, later destroyed another temple built on this site. At least one Muslim ruler was tolerant of the Hindus and Jains living in Gujarat. According to Satish Chandra, author of History of Mediaeval India, Firuz Shah Tughlaq (reigned: 1351-88) encouraged the Hindu religion and promoted the worship of idols. Generally, the 14th and 15thcentury rulers of Gujarat were unlike Firuz with regard to tolerating Hinduism and its temples. Yet, the mosques and other important structures they built show many influences of Hindu temple design.
When the Muslim regimes began to be established in Gujarat, they faced a problem, which is well put in Architecture at Ahmedabad, Theodore C Hope (1831-1916): “The problem which the Mahomedan dynasty and its newly-converted adherents set themselves to solve was extremely similar to that presented to the Christians in Italy some ten centuries earlier. In both cases the object was to convert a Pagan style of architecture to the purposes of a religion abominating idolatry.” 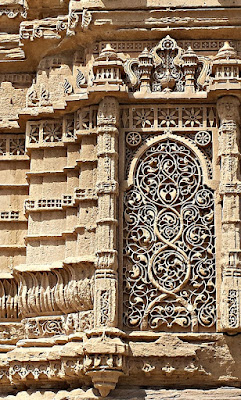 What resulted is what we found in Gujarat: 15th century mosques and Islamic mausoleums with significant architectural similarities to the local style of Hindu temple architecture of that era and before. What distinguishes Islamic buildings from the Hindu structures that influenced their design is the lack of figurative sculptures and decoration and the presence of minarets and mihrabs. This fusion of styles is nicely put on a placard we saw at Sarkhej Rauza near Ahmedabad: “… the early Islamic architectural culture of the region, which fused Islamic influences from Persia with indigenous Hindu and Jain features … The architectural style of Sarkhej Rauza is a precursor to the Mughal period in a true amalgamation of Hindu, Jain, and Islamic styles. Hindu craftsmanship and construction know-how was overlaid on Islamic sense of geometry and scale” 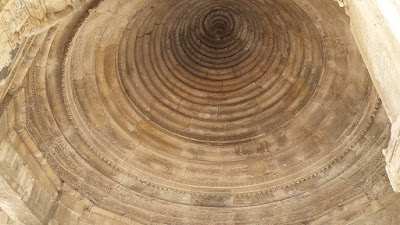 Champaner: ceiling of a mosque
LEARN MORE ABOUT GUJARAT
by clicking HERE:
https://gujarat-travels.com/