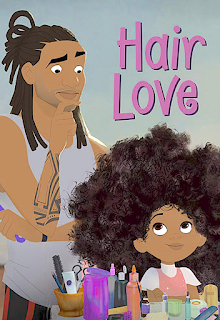 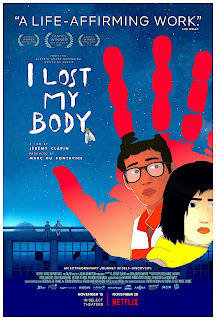 1) I LOST MY BODY  Jérémy Clapin - CGI (Xilam) France
I have such mixed feelings about this animated feature Film from France, adapted from the novel THE HAPPY HAND by Guillaume Laurant (screenwriter of AMELIE) which won the Annecy Cristal Award and Audience Award as well as the Critics Week Grand Prize at Cannes 2019.

First of all, I love that this film exists, I love its ambition, its surreal soulfulness and the Cartesian concept of the hand missing the body and not the inverse. I love that this is not a fairy tale or a superhero saga but an animated film about death, desperation and the meaning of life, finding yourself and avoiding your destiny. I love the black and white backstory in progressive flashbacks. I love that everybody loves this film, signaling studios once again that audiences are ready for the medium of Animation to realise its full potential. I love the nicely observed characters, Naoufel and Gabrielle; they transport us across the void of despair to the hope that comes with a leap of faith.

The HAND, the lead protagonist along with its owner, is a problem for me, though. It’s Naoufel’s hand but, despite the unclear initial shots you wouldn’t know it. Understandably, director Clapin didn’t want the hand to look incongruously anthropomorphic but better animation and storyboarding could have given it a clearer identity (the beauty spot, for example) so we know whose hand it is and that it’s trying to return to Naoufel. Its bizarre, rotoscoped & weightless locomotion is disappointing. There are some spectacular camera angles for its traveling sequences which should have been matched by equally spectacuar animation.

What bothers me most is the animation. At first glance it looks pencil-drawn but the stiffness and limitation quickly tell you it’s CGI, based on rotoscoped live actors. It's a mistake to think that live actors' movement is more life-like in animation, it's not. Just using the Grease Pencil tool in Blender to soften its 3D look does not make it hand-animated. And isn’t it interesting that CG films try so hard to look pencil-drawn these days? The art of animation is more than looks, whether it be 3D or 2D. In this very bold and original film the animation does not measure up to the intellectual ambitions of the story and that does the wonderful art of animation a disservice. It’s fitting that French animation should tackle such a soulful subject but animation isn’t a moving comic book, it's not rotoscoping, it’s an art form that has a unique language that has to be respected as much as the subject. French animation can do so much better.

Despite my misgivings, I still hope it wins an Oscar, which might encourage other studios to break out of the misguided “children’s genre” thinking and into the glorious story-telling diversity of the animation medium.