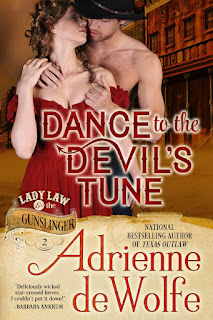 Title: Dance to the Devil's Tune
Series: Lady Law & the Gunslinger (#2)
Author: Adrienne deWolfe
From: Review Copy
Genre: Western, Romance
Release Date: 15th November 2016
Challenges: 2016 New Release Challenge, 2016 Prequel & Sequel Challenge (2 points)
Links: Goodreads - Amazon
Synopsis (from Goodreads): Maestro's music creates mindless puppets, who commit crimes at his command. To lure the sinister jewel thief out of hiding, Pinkerton Agent Sadie Michelson poses as a wealthy widow. Fearing for her safety, William "Cass" Cassidy, her hotheaded lover, hatches his own plot to end Maestro's killing spree. But his daring gamble backfires and costs him Sadie's trust. Now Cass is on the run, hunted by Maestro and the Pinkertons. Torn between her mission and her gunslinging lover, Sadie must stop Cass's showdown with Maestro, or she'll lose her badge-and her man.

Dance to the Devil's Tune is the second book in the Lady Law & the Gunslinger series, though it could be read as a standalone. While the romance between Cass and Sadie continues on from the previous book, the case that the two of them are working on is completely different. However you get a better effect if you read the books in order. This review is spoiler free.

I can't say that I've ever thought of myself as a Western fan in the past, and even now I very rarely pick one up, unless the Western happens to be written by deWolfe. I discovered her quite by accident, but am so glad I did because her books have an addictive quality. They blend together the feel of the times and the things that modern readers really want in their books.

I love Sadie and Cass' relationship, I was going to say I love it despite the messiness of it, but I think I mean because of it instead! They're two rather hot headed characters who have been head over heels for each other for a good long while and yet they can't seem to accept that the other one feels the same way. It's a great dynamic, especially with the undeniable chemistry between them. As a reader you know that Cass is faithful despite Sadie worrying that he isn't, and you know that Sadie is just thinking about his safety when it doesn't look like it, but for these two the messiness works.

I wasn't sure on reading the description quite how the Maestro thing would work, and I will admit to being somewhat apprehensive about it (but it wasn't going to stop me reading!) However I needn't have worried. That side of the plot was interesting and well thought out. Though I will admit to having the Maestro pegged from almost the first moment the reader met him. I wavered once in my certainty but that didn't last long.