Adam's Angel by Mandy M Roth (#2 League of the Unnatural) 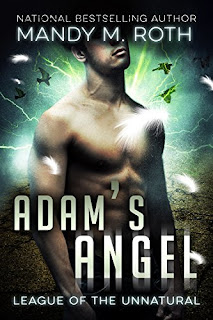 Title: Adam's Angel
Series: League of the Unnatural (#2)
Author: Mandy M Roth
From: Amazon
Genre: Romance, Urban Fantasy, Paranormal
Release Date: 9th January 2012
Challenges: 2016 Prequel & Sequel Challenge (1 point)
Links: Goodreads - Amazon
Synopsis (from Goodreads): Saving the world is never easy...Adam Shafer seems to have it all, sex appeal, brawn, magikal powers, superhero status, the ability to charm the pants off any female. Any female whose not the sexy, leggy blonde Special Paranormal Prosecutor, Tori Dore. They’ve been working hard to convict an evil mastermind but Tori doesn’t seem to even notice Adam exists. He’s sure his powers of persuasion are still working, but with Tory they seem defective. This can only mean one thing, she’s his destined mate. Can he convince her he’s more than a man-whore before evil rears its ugly head, threatening their happiness?

While Adam's Angel is part of the League of the Unnatural series, it is possible to read it as a standalone. In fact it had been so long since I read the previous book, Pike's Peak, that I'd mostly forgotten what had happened, though the introduction of characters from the previous book did help to jog my memory a bit. However I don't feel that this detracted from my enjoyments of Adam's Angel.

My review of Adam's Angel is only going to be a short one as the book itself is a quick read. However it is worth pointing out that I was aware of this going in and the fact that it was going to be a quick easy read, and therefore a palette cleanser, was the reason I chose Adam's Angel in the first place.

There was good chemistry between Tori and Adam right from the start of the story, and I loved that Tori didn't just fall into Adam's arms because she could, it made her seem that much stronger as a character. Even so it was brimming under the surface and worked well for them.

There was plenty of action in Adam's Angel as well, not just the bedroom kind either! Rather there was also a fight scene or two where several of the characters got to make an impression of themselves!

This was a great quick read, perfect for when you just want an in between story!

A Guide to Home Remodeling

Are You Ready To Test Your Proofreading Skills?

Adam's Angel by Mandy M Roth (#2 League of the Unnatural)